As the sun rose over New Delhi on Sunday morning, the megacity’s normally chaotic streets were unusually calm.

Minutes later, at 7 a.m., even those carrying out last-minute errands had dispersed as a nationwide curfew came into force. Billed by Prime Minister Narendra Modi as a “people’s curfew” against coronavirus, the voluntary shutdown lasted for 14 hours until 9 p.m. — leaving markets empty, train stations quiet, and tourist sites actually looking like they do in the photos.

Authorities said the curfew would serve as a test to see how prepared this country of 1.3 billion — the world’s second-most populous nation — was to deal with the pandemic. It was perhaps the world’s largest exercise in voluntary social distancing to date. But two days later, Indians found themselves facing a lockdown that was no longer optional.

On Tuesday night, Prime Minister Narendra Modi announced a total ban on Indians leaving their homes for 21 days, set to come into force at midnight local time, abruptly putting one fifth of the world’s population under lockdown to combat COVID-19. “To save India and every Indian, there will be a total ban on venturing out of your homes,” Modi said. “It is impossible to say the price India will have to pay if irresponsible behavior continues.”

The move followed days of increasing restrictions. On Monday, more than 200 million people were already under lockdown in 75 municipalities and four states. India’s railway service, which until recently carried some 25 million passengers per day, announced trains would cease running until March 31 at the earliest. And airports nationwide were all but deserted after a ban on domestic and incoming international flights came into force late Sunday.

An Indian police officer wearing a mask checks a suburban train before they are locked down in Mumbai, India, on March 23, 2020.
Rafiq Maqbool—AP

With just 469 confirmed cases of COVID-19 and 10 recorded deaths, the outbreak is less advanced in India than it is in much of the rest of the world, where recorded cases have passed 360,000. That could be partially due to India’s warmer climate — although experts say it’s too early to tell. What they do know is that only 15,000 tests had been carried out in India as of Monday, and they are concerned the disease could be spreading undetected in the country’s many densely populated urban areas, threatening to overwhelm the country’s public healthcare system. “I’m deeply worried that there’s a lot of community transmission and we are just not aware of it because there is not widespread testing,” Dr. Ashish Jha, director of the Harvard Global Health Institute, told TIME earlier in March. The numbers, he said, are “just not right.”

Even as India’s government began implementing social distancing measures, some of its people proved that changing behaviors would not be an easy task. Across the country, people assembled on their balconies and in doorways at 5 p.m. on Sunday to applaud the nation’s health workers, responding to a request from Prime Minister Modi to show solidarity while practicing social distancing. But in some localities large crowds flocked into the streets enthusiastically banging pots and pans, risking spreading the virus further. In a housing block in Mumbai, photos showed residents jostling for space on a balcony.

People clap from balconies in show of appreciation to health care workers at a chawl in Mumbai, India, on March 22, 2020.
Rafiq Maqbool—AP

Those attitudes might change with time as public health information campaigns gather steam. Ahead of all phone calls, Indians now hear the sound of a person coughing — followed by a prerecorded message telling them to sneeze into a handkerchief, wash their hands and keep their distance from people who are showing symptoms. But concerns remain for the millions of Indians living in cramped urban slums where social distancing is unfeasible and hygiene facilities are already poor. India has just one hospital bed per 2,000 citizens, far below the World Health Organization’s recommendation of 20.

Late on Sunday, as the voluntary curfew came to an end, Modi urged Indians to prepare for a long haul. “Janata curfew [People’s curfew] will end at 9pm but it doesn’t mean we should start celebrating,” he said. “It’s the beginning of a long battle. People shouldn’t come out of houses in states which have announced a lockdown. In the rest of the states, if it isn’t very important, don’t come out of your houses.” 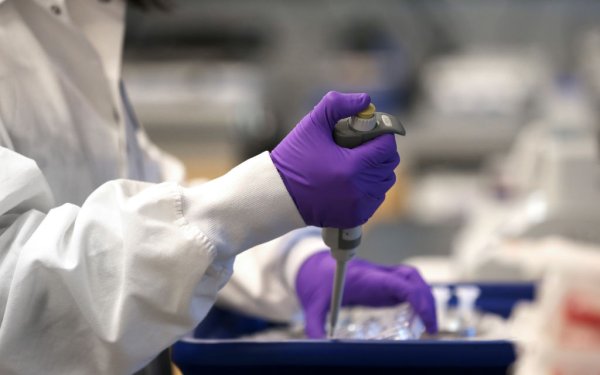 Drugmaker Prepares to Scale Coronavirus Vaccine to Millions
Next Up: Editor's Pick