'We Want to Compete, But Not at the Cost of a Life.' Angry Olympians Call for the Tokyo Games to Be Delayed Over COVID-19

An athlete carries the olympic torch during one of the last relays ahead of the olympic flame handover ceremony for the 2020 Tokyo Summer Olympics in Athens, Greece on March 19, 2020.
ARIS MESSINIS—AFP/ Pool/Anadolu Agency via Getty Images
By Sean Gregory and Alice Park

Like many Olympians around the globe, Erik Kynard, an American high jumper, is tired of the double dose of stress. Living amidst the global COVID-19 pandemic produces enough worry on its own. Throw in the daunting task of attempting to qualify for an Olympic team, even though COVID-19 social distancing guidance makes proper training all but impossible for many athletes, and anxiety levels are bound to rise even higher.

While most major sporting events over the next few months have shut down or been postponed, the International Olympic Committee has thus far declined to reschedule or cancel the 2020 Summer Olympics. They are still set to begin in about four months, on July 24 in Tokyo. As each day passes with COVID-19 cases on the rise, the idea of 11,000 athletes from around the world — not to mention the tens of thousands of spectators — traveling to Japan, which has more than 1,000 confirmed coronavirus cases and 40 deaths attributed to COVID-19 as of Sunday afternoon, seems more and more unlikely.

“Your dreams are essentially turning to a fantasy of sorts, because you can’t do what’s necessary to achieve that dream,” says Kynard, a member of the USA Track & Field board of directors who won a high jump silver medal at 2012 London Olympics and finished sixth in Rio. “You don’t have to be a measure of scholar or scientist to evaluate the circumstances that currently face us. For them to say that they are even prepared to host the games, with the presence of such viruses, I personally think it’s ludicrous. Because how could you be?”

Kynard is frustrated. Under normal circumstances, he’d be in Manhattan, Kans., training at Kansas State University. But that facility is closed. So he’s holed up in Marietta, Ga., unable to at least lift weights, lest find a high jump bar and mat. He believes that financial greed has prevented the International Olympic Committee from at least pushing back the Olympics start date.

What would Kynard would say to IOC president Thomas Bach, if Bach were sitting across from him, at a socially appropriate distance of six-feet away?

Oof. Kynard’s comment, harsh at is it, reflects the growing anger athletes are feeling over the IOC’s response to the COVID-19 crisis. Now, Olympic sport governing bodies are starting to line up behind them.

On Friday, March 20, both USA Swimming and USA Track and Field sent letters to the United States Olympic and Paralympic Committee (USPOC) advocating a postponement of the Tokyo Games. USA Swimming asked that the Games start in a year. Both organizations pinpointed the mental health of their Olympic athletes as motivation for their stances. “Everyone has experienced unimaginable disruptions, mere months before the Olympic Games, which calls into question the authenticity of a level playing field for all,” wrote Tim Hinchley III, USA Swimming’s President and CEO. “Our athletes are under tremendous pressure, stress and anxiety, and their mental health and wellness should be among the highest priorities.”

Swimming and track and field are two of the most popular Olympic sports, and the U.S. is the dominant team, having topped the medals tables in Rio; American swimmers won 33 medals in Brazil, track and field athletes took home 32. The stances of these organization could put further pressure on the IOC to alter its Tokyo plans. “Track and field, gymnastics and swimming are the heavy hitters,” says Maria Mictha-Coffey, a two-time race walking Olympian from the U.S. who holds a Phd in biomedical sciences and is training to be a physician’s assistant. “It falls upon us sometimes to set a precedent. I feel very, very proud of them for writing the letters, because it’s in the best interests of not just the athletes, but of the world.”

“The USOPC has complete and total empathy for the athlete community as they manage the terrible stress and anxiety caused by the current lack of certitude regarding the Tokyo Games,” USOPC CEO Sarah Hirshland and USOPC Chair Susanne Lyons said in a statement in response to USA Swimming’s letter. “At the same time, and as it relates to the Games, we have also heard from athletes that they want the Olympic and Paralympic community to be very intentional about the path forward – and to ensure that we aren’t prematurely taking away any athletes’ opportunity to compete in the Olympic and Paralympic Games until we have better clarity.

With the Olympics still on the schedule, many athletes feel they are incentivized to either flaunt recommendations to quarantine, putting themselves and others at risk of contracting the virus, or find unsatisfying fly-by-night methods of training. Kynard did a core workout and technical run at a softball diamond. He can’t find a gym for weight training. Nathan Adrian, a five-time Olympic gold medalist American swimmer who specializes in the 50m and 100m freestyle, can no longer train at his Bay Area pool, which has closed in the interest of public health. He’s planning on doing dry land workouts at home and ordered gym equipment that’s on its way. “You have to go on assuming everything is going to happen as normal, but at the same time, you have to step back and not let that anxiety about the uncertainty of the [of the Olympic schedule] hit you,” says Adrian. “You can pretend that running and dry land are substitutes [for being in the pool] but they’re just not. It’ll show up in peoples’ times.”

American sprinter Wallace Spearmon has holed up at a ranch some 20 miles outside of Fayeteville, Ark., where he can’t find a gym. “It’s like me telling you, hey I need you to go do your job, you can’t have any pen and paper, no technology, you can’t call anybody, go do a great job,” says Spearmon. “How are you supposed to do that?” Spearmon says that his girlfriend, Canadian pole vaulter Anicka Newell, has instructed him to do push ups on couches and step-ups on stairs. She rode her bike down the street, and with Spearmon sprinting after her. “It’s like some 1980 Rocky stuff around here,” he says.

At 35, Spearmon is taking a final shot at the Olympics. Still, he’d prefer postponement, or even cancellation, for the sake of clarity. With his future uncertain, his life feels essentially on hold. Plus, removing all health risks is paramount. “We want to compete,” says Spearmon, “but not at the cost of a life.”

“Every individual must have the possibility of practicing sport,” the Olympic Charter states, “without discrimination of any kind and in the Olympic spirit, which requires mutual understanding with a spirit of friendship, solidarity and fair play.” Adrian points out that continuing with the Games will further highlight the inequities inherent in international competition.

“At this point, things are not all that fair,” says Adrian. “How is it OK for those with financial means or social means to find a place to train, to continue training, while the vast majority of people I know who are Olympians, Olympic medalists, world champion medalists, don’t have a place to train now. This isn’t the spirit of what the Olympic Games are supposed to be about.”

The gold medalist is also concerned about trickle-down effect of keeping the Games on schedule. Since he has extra time on his hands, Adrian been spending more time than usual glancing at swimming websites. “You’re seeing comments from parents of 16-year-olds who don’t have a chance of making the Olympics who feel really compelled to train right now,” says Adrian. “And that’s the precedent that the Olympics and Olympic trials going full steam ahead is saying. I think that’s dangerous.”

It’s not just swimmers and track athletes who want to see postponement. Most team sports inherently violate President Donald Trump’s guidance to limit gatherings to under 10 people. Wrestlers feel tormented about choosing between their athletic rituals and violating social distancing norms. Postponement, says U.S. judoka Nina Cutro-Kelly, “would bring peace of mind. We have to be able to train six days a week and access facilities to be able to train properly. If we are stuck at home there is no way to prepare properly. Additionally, if we cannot finish the qualification process, it will be unfair to those who have trained for this for years.”

We just might be too far deep into the COVID-19 crisis for a July Olympics to make much sense. “The Olympics is something that unites the world,” says Michta-Coffey. “And I think right now, what mankind needs to be capable of doing is overcoming this pandemic. We need that time to need the world heal physically and also financially. Let the Olympics be a boost the economy, and to morale. But in due time. Not right now, when it’s more of a burden and a stress.” 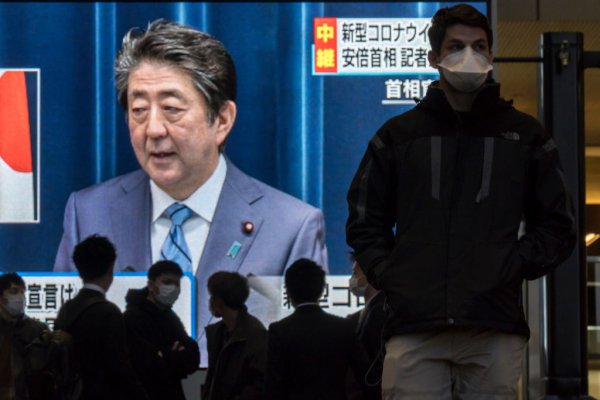 Japanese PM Gives First Hints Olympics Could Be Postponed
Next Up: Editor's Pick