Spies Working From Home: How Coronavirus Is Impacting U.S. Intelligence Networks Across the World

The CIA symbol is shown on the floor of CIA Headquarters in Langley, Virginia.
Mark Wilson—Getty Images
By John Walcott

In a foreign capital recently, an American spy was facing an unexpected dilemma: how to cancel a clandestine first meeting with a promising new recruit? People were not leaving their homes, so the usually crowded shops, bars, buses, parks, and restaurants were empty, and there was no longer a place to meet without arousing suspicion.

While the coronavirus is exacting a far larger toll on people around the world who are losing income, jobs and even their lives to the pandemic, it also poses an unprecedented problem for intelligence case officers stationed around the world whose job it is to meet the agents they’re recruiting or running without being noticed or risking their own, their contacts’, and their contacts’ families’ liberty and lives. The pandemic has slowed the pace of America’s adversaries’ spy networks, as well, as they too have turned their attention to combating the virus, U.S. officials say.

“It’s hard enough to maintain your cover in a crowded city,” said a U.S. intelligence officer, who spoke on condition of anonymity. With an increasing number of cities on lockdown, “it’s even harder to avoid attracting attention on an empty street,” the officer said. “And you can’t just pick up the phone or send a text.”

Some of the tradecraft familiar to readers of spy novels and anyone who’s watched “The Americans” — “dead drops,” in which flash drives and other material are left in predetermined locations; “brush passes” in which information is exchanged by people bumping into one another; make-up, wigs, changes of clothing and cars — have been complicated in recent years by surveillance cameras, facial recognition, artificial intelligence and other evolving technologies. American spies have adopted new methods they refuse to discuss, but now the global pandemic is compromising those and compounding the problem of intelligence gathering.

The U.S. Government has invested heavily in spy satellites and other technologies with unprecedented abilities to stop, look, and listen, to collect the daily deluge of information available from open sources in more than 150 languages, and to sort through that and separate fact from fiction, says a former senior CIA operations officer.

But technology, despite its promise, “fails to reveal what’s in the hearts and minds of adversaries and strategic rivals,” says former Agency officer Douglas London. “Only human intelligence provides an understanding of how the information was acquired and the agent’s motivation for sharing it.” Acquiring that human intelligence — HUMINT, as it’s known in the business — requires spotting, assessing, recruiting, and running foreign agents, which the coronavirus is making more difficult.

For example, in 2017, the CIA was forced to extract, or “exfiltrate” in spy-talk, a longtime U.S. agent from Russia who was privy to some of President Vladimir Putin’s thinking and who helped the Agency conclude in 2016 with “high confidence” that Putin was seeking to help Donald Trump defeat Hillary Clinton. In part because of the loss of that asset, the current U.S. intelligence assessment is only that Russia appears to prefer Trump, a change the administration has pounced on to attack reports that Russia seeks to help the president’s re-election.

While the frontlines of American espionage are taking the hardest hit, the headquarters of the CIA and the Office of the Director of National Intelligence (ODNI) in the Virginia suburbs of Washington haven’t been spared from the pandemic’s impact as they are forced to operate remotely like much of the American workforce.

According to an ODNI spokesman, the office that oversees all 17 U.S. intelligence agencies “continues to monitor the COVID-19 pandemic and adjust its response, in accordance with CDC and OPM guidance. ODNI is reducing staff contact through a variety of options including staggered shifts, flexible schedules, and social distancing practices. These actions are being implemented to maintain the safety, security and health of the ODNI workforce while continuing to meet mission requirements.”

Despite having warned of the dangers of a possible flu pandemic for years, working-level intelligence officers in multiple agencies said several of those agencies were ill-prepared to follow those guidelines.

Late last week, the two intelligence officers and a third official, who also requested anonymity, said they had heard that their agencies were considering moving to split shifts to reduce the number of people at the office at given times and designating “essential personnel” who must report to work in the office, but had been given no details.

Spies working from home still need to protect classified information, especially as China, Russia, Iran, North Korea, and others are improving their hacking skills. Some conversations can be held on encrypted cell phones that users keep with them, but the secret network the State and Defense Departments and others use to exchange information, called SIPRNet, for Secret Internet Protocol Router Network, is, unsurprisingly, not intended for home use. Moreover, it can handle only information classified Secret or below, which today is garden-variety intelligence, and new installations can cost as much as $25,000, officials and defense contractors say.

The Joint Worldwide Intelligence Communications System, or JWICS, can handle Top Secret intelligence. New installations of that system cost roughly $70,000, the same sources say. Because top officials come and go with the political winds and higher-ranking career diplomats, spies, FBI agents, and soldiers tend to move around the world or the country, equipping their homes with JWICS doesn’t make sense.

And the government’s most valuable secrets, classified Top Secret and then designated as Sensitive Compartmented Information (TS/SCI), must only be discussed in special rooms scattered around more than two dozen government agencies, congressional office buildings, military bases, and embassies. Officials still need to gather in them despite the pandemic.

“I suppose you could call it ironic,” a third U.S. official said with a shrug this week. “But the institutions that are charged with preparing the country for possible threats were poorly prepared for this one.” 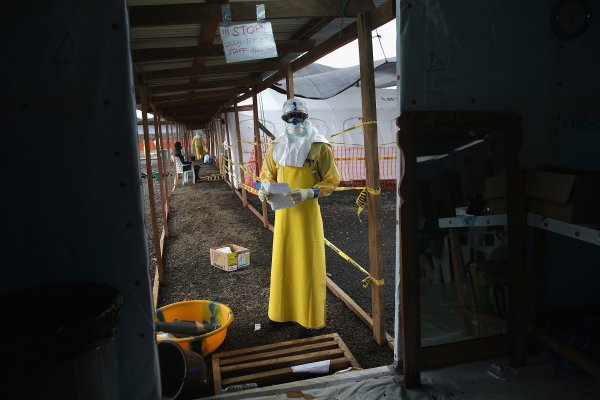 Five Key Lessons From Ebola That Can Help Us Win Against Coronavirus, Everywhere
Next Up: Editor's Pick