Living In Coincidental Self-Quarantine, Some Big Brother Contestants Around the World Are Still to Learn About the Coronavirus Pandemic

Across the globe, contestants on the TV show Big Brother — a reality TV competition that sees contestants being locked in a house-styled TV set and isolated from the outside world — are likely among some of the last people to learn about the coronavirus pandemic, and its spread worldwide. The hundred-some people, across studios in Sweden, Brazil, and India, among other countries, are modeling self-quarantine in ways they didn’t even realize.

Big Brother began in the Netherlands in the late 1990s and and has become a reality TV staple in numerous countries, including the United States. Versions of the show are currently airing in six countries and a season is also being taped in Australia to air at a later date.

The 13 contestants currently appearing on the German version of the reality show, Big Brother Deutschland, have not heard about the outside world since the show began filming on Feb. 6. According to Deadline, four contestants who entered German Big Brother house on March 6 were instructed to not tell anyone about the outbreak.

But following criticism in recent days, German broadcaster Sat.1 announced on Tuesday that they would be told about the coronavirus in a live broadcast airing at 7 p.m. local time, given how serious the situation has become.

When the German season first began taping, coronavirus had spread primarily across Asia. As of Tuesday morning ET, the virus has also spread through Europe, North America and South America, infecting over 187,600 people and killing over 7,400, according to a tracker by Johns Hopkins University. The show’s host Jochen Schropp and an on-set physician will tell the housemates about the spread of the virus, which has lead Germany to close its borders, shutdown schools and shutter shops. Contestants will also be shown video messages from their relatives.

Germany’s Big Brother is not the only edition of the show informing its contestants. Filming for the Australian version of the show began three weeks ago, but Australian news site 7news reported on Monday that a spokesperson for the show had confirmed that “Housemates have been brought across the current situation and we are in constant contact with the families to keep all involved up to date.” (Unlike almost all other editions of the show, this new season of Big Brother Australia is not airing episodes or footage live, rather it is taping now for broadcast later in the year.)

Big Brother‘s Canadian edition, which has forgone its usual live studio audience due to the threat of coronavirus, has also told its contestants about the pandemic and will continue to update them as the crisis develop, Global News reports. Before the contestants were informed about the change, they were filmed wondering why they couldn’t hear audience reactions during the weekly live episodes which see contestants eliminated, leaving one participant to wonder if “the house was now soundproof.”

Contestants on Italy’s Grande Fratello VIP — a Big Brother spin-off featuring famous participants — were reportedly told of the coronavirus’ spread in their country last week. Outside of China, Italy is now the country worst hit with the virus, having over 27,900 confirmed cases and over 2,100 deaths as of Tuesday afternoon ET. Contestants on a season of Big Brother currently airing in Sweden (Big Brother Sverige) have also been informed. (Both the Italian and Swedish shows have, in recent weeks, foregone the standard Big Brother practice of introducing new players, or guests, into the contestants’ house.)

However, the contestants on both Brazilian Big Brother and Israeli Big Brother (HaAh HaGadol), who have all been in isolation since January, have reportedly still not been informed; Brazilian network Globo has said it will inform the contestants shortly and update them on their families, per Deadline.

Bigg Boss Malayalam, an edition of Indian Big Brother, is also on the air; six contestants had to temporarily leave the house in February because of a viral eye infection, according to The Times of India. While it is unclear whether the participants have been informed of coronavirus’ spread, Indian news sites report one evicted contestant taken into custody by Indian police after leaving the show, when he was greeted by crowds of fans at an airport in breach of rules implementing social distancing.

Coronavirus has also seen the premieres of Big Brother seasons in Portugal and Greece delayed.

This won’t be the first time Big Brother has broken its isolation rule to inform contestants about current events. In past seasons of U.S. edition Big Brother specifically, producers informed the final three contestants of Big Brother 2 that there had been an attack in New York on 9/11 — and that a relative of one contestant, Monica Bailey, was among missing World Trade Center workers — although the contestants said they did not learn the full details of the tragedy until the series finale on Sept. 20.

And after Donald Trump won the 2016 presidential election, host Julie Chen told contestants on a spin-off series, Big Brother Brother: Over The Top, of the results on Nov. 11 in a clip that went viral. 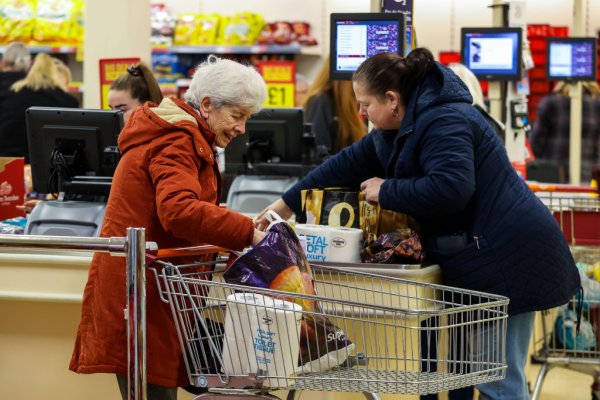 Store Chains Set Aside Time for Seniors to Shop
Next Up: Editor's Pick