Nintendo's Animal Crossing: New Horizons Is the Game We All Need Right Now

On my fourth day on my Animal Crossing: New Horizons island, I gorged myself on peaches for energy and destroyed all my island’s rocks in a quest to extract every bit of iron. I need 30 pieces to build a general store, but the material is hard to come by. It was a big, unsustainable mistake: the rocks I smashed didn’t respawn for several real-time days, while leaving me without the iron I so desperately needed.

This was just one of the many ways Animal Crossing: New Horizons, Nintendo’s new life simulator for the Switch, encouraged me to take it easy, chill out, relax, and enjoy the game at a slower pace. It wanted me to stop and smell the peaches, not gobble them up and strip the land of its resources.

In New Horizons, your character is feeling strung out by modern life, and decides to book a relaxing getaway. A shady-looking racoon-dog named Tom Nook sells you a travel package that sounds like a great deal. But the next thing you know, you’re stuck on a deserted island with a strange cast of characters. Nook then charges you for the privilege of turning said island into a real community, sending you off on various quests and tasks to earn points. New Horizons is an escape that makes you feel productive for reveling in simple activities like fishing or gathering wood — and it’s the exact game we need right now.

When I get hold of a new game, especially one I’m excited about, my tendency is to hunker down for long play sessions. I want to dive into the deep end, seeing all that a game has to offer as quickly as possible. That’s impossible in New Horizons, which frustrated me at first. But over time, Nook and the rest of the game’s characters pulled me into the pleasant ebb and flow of island life. New Horizons encouraged me to play in small chunks — roughly an hour at a time — then put it down until the next day.

My island retreat, which I named Carcosa, could only change so much so quickly. I mined iron from rocks, chopped trees to gather wood, and pulled up weeds from the soil. But there’s only so much gathering I could do in a given play session. Resources are limited and take about a day to repopulate. Most major projects, like building a bridge or a house, take 12 to 24 real-time hours to complete. Often, after about an hour or two, I found I had nothing more I could do. Sometimes there’s nothing left but to wait and let the island work its magic.

Every new play session represented a new in-game day. Nook would stand in the center of the island making announcements. Sometimes there would be a new visitor to the island, like a wayward sailor named Gulliver or a delightfully frightened ghost named Wisp, who needed my help. I’d collect resources, accomplish a few small tasks, and work on the next bit of infrastructure for the island. Maybe I’d build a new bridge, or perhaps I’d work on furniture for the home of a new arrival. It was up to me, but there was always only so much I could accomplish in a play session.

These little dips into island life build up over time, creating a pleasant routine: Log in, knock out some daily quests for Nook, then work on some infrastructure projects. I could hunt for butterflies and fossils to fill up the local museum. I might chat with my neighbors to see what they’re up to. I could comb the beaches for seashells and do a little fishing. All activities feed into Animal Crossing’s “Nook Miles” system. Every activity — from fishing to talking to folks — earned me Nook Miles that I could spend on upgrades and gear.

There’s a long list of Nook Mile achievements—catching 10 or more fish in a row without losing one, for example—as well as daily activities that cycle every morning. No matter what I was doing, I was always earning Nook Miles. I was always getting resources I needed. I was always making progress. I never felt pressured to prioritize one part of island life over another. I was always rewarded for doing what I wanted.

There is freedom in that — and freedom in putting Animal Crossing down after an hour. New Horizons is chill. It lets you dip in and out without consequence. Every trip to your island is a delight, and every day you shape it a little bit more. Over the course of my days and weeks on my island, I had begun to change it into something I wanted. I could alter the flow of rivers, populate it with people I liked, and wander its forests at night looking for ghosts.

It was my choice. It was my island and, after two weeks of small gameplay sessions, I had come to feel responsible for it. I never again got gorked out on peaches and smashed all the island’s rocks. I built a sustainable land in a game built for sustainable, long-term play. It felt nice. It felt chill. It felt like island life. 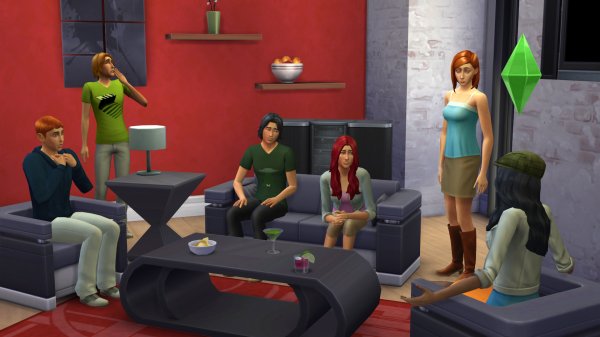 'It Nearly Brings Me to Tears.' 20 Years On, The Sims' Diehard Fans Could Never Let Go
Next Up: Editor's Pick