Why Colleges Need to Totally Rethink How They Treat Working Students

College is traditionally viewed as a time for students to focus on classwork and completing their degree before starting their careers in earnest. But a growing number of students are working during college, whether out of financial necessity, to jump-start their professional lives, or to give them a sense of purpose.

Noel Anderson, author of Working to Learn: Disrupting the Divide Between College and Career Pathways for Young People, argues that colleges and other academic institutions needs to better recognize that more students than ever are working during their studies. Furthermore, he argues that there can be novel ways to blend schoolwork and paid work, with benefits in both spheres of life.

TIME recently sat down with Anderson, also a chairperson of the of the administration, leadership and technology Department at New York University’s Steinhardt School of Culture, Education and Human Development, to discuss his research on why students are working and what academic institutions can do to better support that behavior.

The following interview has been edited for length and clarity. For more with Anderson, watch TIME’s video interview above.

TIME: What prompted you to write this book?

NOEL ANDERSON: I was looking at the data around college access — I’ve been always concerned about students of color, working class, and poor students going to college. I realized that we had more young people going to college, but a significant number not completing. And what I wanted to understand was, why was that happening? If we open the doors, why are people not necessarily going through and completing?

So the question becomes what’s happening, and how do we reconcile this?

You found that around 70% of students in community college attend both college and work. That’s an incredible number.

And what we haven’t done is really caught up to that reality. Schools still believe that you’re supposed to go to school, and then work. It’s a carrot and stick. But in fact we’re seeing that the carrot may be in fact work to drive school completion. So that was the issue.

The vast majority of folks have to work. So what are we doing as institutions to support that?

Can you share some of the data you found the most interesting?

What we see when we look at the college data is that we have about roughly 70% of the folks who are going to college actually are working, going to school. The vast majority, 60% or more who attend community colleges, tend to be students of color or from underrepresented minority groups.

On the high school level, roughly 40-50% of students are actually working. And we even have some early data of middle school students working. It may not necessarily be in formal jobs, but they are doing stuff that could be under the table, or other kinds of work, taking care of family. So we’re seeing data pretty early on of folks actually working.

One of the topics in your book is how there might be better ways to serve young Latino and black boys especially.

When it comes to black and Latino boys and education, we’ve gotten a couple of things wrong.

One is that we’ve gotten this issue around their needs and how they identify incorrect. For young boys of color, the driver for a number of them now as we’re seeing in the data is not necessarily just going to school and completing school. For them work is a driver, right, so it helps to inform and inspire them to actually complete academically. That’s one thing.

The second thing which we don’t talk enough about is that work for young boys of color is part of an identity, not a role.

So what does that mean? It means that if I look at my family … the people around me may have jobs that aren’t necessarily white collar, but the way in which the family looks at work, the way in which they see worth ethic as driving their identity, these young people could work at a place like a CVS, right, but for them, being able to bring home money helps to shape their identity and gives them a place within their family.

But we really delimit that. We don’t really investigate that. We see that as, well, that’s not a career pathway, how does CVS get you to being a lawyer?

But at that moment being able to bring home money to support my family is a driver of who I am, it gives me the self-esteem and the dignity that I’m looking for. But that’s also what it means to be in a family that could be working class, they could be laborers, that they have an identity that’s shaped by work.

The last thing that is the data is showing us is that with young people of color, particularly young boys of color and girls of color, the earlier they start working, when they have the ability to work, 14, 15 years old, has not only just long-term economic effects, but it also helps things around self-esteem and identity and pride.

Those are the things that we tend to reduce. That occupational identity that we so pride ourselves to look at with older adults, we don’t see that when it comes to young people. So that’s what we’re getting wrong. We need to correct that and almost invert our old model, which may be very much middle class and more focused on white populations than it is around what it means to work and to be a person of color going to school in the current climate.

How should we change how we think about college to address your findings?

If we know that young people, and we know that adults even as they go to school are working, going to school, then how do we begin to raise policy conversations to the level of saying, ‘well, how do we support this idea of work and work-based learning?’

What does it mean to set up a system both in policy and practice where you can have both? That means that if I’m a 12th grader in a New York City public school, should I have to sit in a classroom for eight hours for the full day? Or by the time I get to that level should I have a few hours when I’m actually working on a job that is linked to a career pathway, and I’m still getting credit for it?

So that balancing act I think has to be — we have to disrupt these sort of bifurcated policies and kind of educational kind of paradigms that are fitting what exactly folks are doing right now, what young people are actually doing. They’re saying through their actions, “we need both.” But the policies over here and discourse over here, by their actions and what they’re doing, is showing otherwise. We need to catch up. 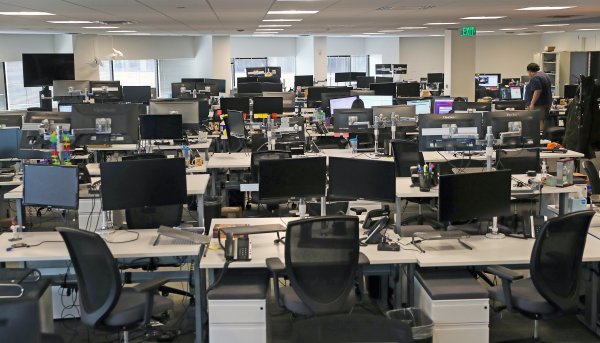 Coronavirus Shows Why It's Hard to Make Remote Work Actually Work
Next Up: Editor's Pick