Traders during the opening bell on the New York Stock Exchange on March 9 in New York City. - Trading on Wall Street was temporarily halted early March 9 as U.S. stocks joined a global rout on crashing oil prices and mounting worries over the coronavirus.
AFP via Getty Images
By Elena Conis

You could ignore cholera as easy as you could ignore a case of arsenic poisoning, wrote historian Charles Rosenberg more than half a century ago. The disease’s symptoms of severe diarrhea and spasmodic vomiting left the victim’s “face blue and pinched, his extremities cold and darkened, the skin of his hands and feet drawn and puckered.” A person could be healthy and upright one moment and prostrate a moment later, as suddenly “as if knocked down with an axe.”

In 1832, the terrifying disease brought New York City, then home to a quarter million residents and one of the busiest ports in the world, to a standstill, striking panic in residents and wreaking havoc on the “great commercial mart’s” economy. It was not the first pandemic to bring the city’s businesses to a halt, and it certainly would not be the last.

Now, the world is confronting the possibility of another disease causing severe financial disruption, as American cities from New York to San Francisco isolate and quarantine people, as some of their biggest employers encourage employees to work from home, and as the Dow rollercoasters in response to the spread of COVID-19. “The virus and the measures that are being taken to contain it will surely weigh on economic activity, both here and abroad, for some time,” said Fed Chair Jerome H. Powell last week.

At a moment like this, looking back to the economic impact of the 1832 outbreak might be comforting—but the lesson of that time is more complicated than it may seem.

Back in 1832, anxious New Yorkers had watched for months as “Asiatic” cholera, which had originated in India, made its way across Russia and then Europe, terrorizing cities from St. Petersburg to London. Seven thousand had died in Berlin, New York papers reported, and the disease had claimed four percent of the population of Egypt. Late on a Monday night in June, New York health officials documented the city’s first case. A week later, city doctors tallied nine cases. Just one had survived. Doctors pressed to make the news public, but the city’s health board and mayor hesitated. The doctors, argued a prominent banker, clearly weren’t thinking about what such an announcement would do to the city’s businesses and trade.

But the very news that cholera was moving westward across the globe had already prompted New Yorkers, or at least those who could afford it, to leave the city in haste. By the day after the city’s eight deaths were finally announced, the Evening Post reported that “the roads, in all directions, were lined with well-filled stage coaches, livery coaches, private vehicles and equestrians, all panic struck, fleeing.”

For city merchants, business did indeed dry up. One reported that he was the only one left on his street. A merchant’s wife reported having to bake all her own bread as there was nothing to buy at city shops. The lively dry goods market on Pearl Street “appeared as still and gloomy as the Valley of the Shadow of Death,” wrote merchant John Pintard. City residents emptied their bank accounts in droves. On the Saturday after the first cases were announced, one bank paid out more than $20,000 to anxious clients.

Hotels wrote to the local papers asking them to run notices that they were cholera-free and open for business. “The American Hotel,” the Evening Post dutifully reported, “neither has been nor will be closed.” But the paper added that a simple walk by the building showed it deserted of visitors and boarders. Wealthy Newport, R.I., meanwhile, drew an armed militia around itself, fearing refugees importing the disease from New York.

On the other hand, there were those who made money off the epidemic. Thirty miles outside New York City, country hotels and boarding houses filled to capacity. Back in town, doctors hiked their fees. Peddlers made hefty profits on dubious cholera cures. New jobs opened up, especially for nurses, night watchmen and construction workers, whom the city hired to clean up and build out New York’s notoriously pestilent streets, long piled with household refuse and the excrement left behind by roaming hogs, goats and dogs.

Cholera, mercifully, was seasonal. As the summer waned, cases declined. By mid-August, the epidemic was “greatly diminished.” By the end of the month, residents began to return and businesses reopened. “The stores are all opened, footwalks lined with bales and Boxes & streets crowded with carts & porters cars,” wrote Pintard, who went on to be a founder of the New-York Historical Society. “What a contrast with the middle of July.”

New York bounced back to normal, and its population and commerce continued to boom.

Cholera would visit the U.S. three more times before century was through, the last time in 1873. New York was much more populous by then, as was the U.S., but new scientific knowledge meant that the disease, by then known to be caused by a bacterium transmitted primarily through contaminated water, took a far, far smaller toll.

Still other pandemics followed, though, and the worst of them hit local, state and the national economies just as hard. Bubonic plague crossed the Pacific in the 1900, landing in San Francisco. The city, facing embargoes of goods from the rest of the state as well as neighboring ones, cordoned off Chinatown, whose residents later sued for $2 million in losses. The deadly 1918 flu arrived later, spread in the U.S. by a member of the military. Businesses in Little Rock, Ark., reported losing $10,000 a day. Tennessee shut its mines. When the “Hong Kong” flu struck the U.S. in 1968, brought in by troops returning from Vietnam, the Dow lost more than 13.24%.

Just over a decade ago, the Federal Reserve Bank of St. Louis published a study of the economic effects of the 1918 flu, which killed roughly 675,000 people living in the U.S.; the study’s aim was to estimate the potential effects of a similarly deadly epidemic in modern times. Total economic losses due to the 1918 epidemic are difficult to estimate, but one thing was clear: after it ended, society recovered. As the study’s author concluded, the flu changed individual lives forever, but the economy bounced back.

Historians, as Robert Peckham notes, tend to believe that “analogies create blind spots.” Each epidemic takes place in its own context. The state of trade in New York in 1832—as well as the city’s infrastructure, wealth, poverty, graft and relationship to the rest of the world—played a role in cholera’s spread. The economy recovered then, and has many times since. At the same time, a number of historians credit medieval plague with a role in the collapse of feudalism and the rise of capitalism, so it is hard to generalize about the relationship between epidemics and economies. The national and global financial systems will still exist on the other side of a disease. But no amount of looking backward can tell us what they will look like then—or what COVID-19 might be capable of changing.

Elena Conis is a historian of U.S. public health and medicine, and director of the joint graduate program in Public Health and Journalism at Berkeley. 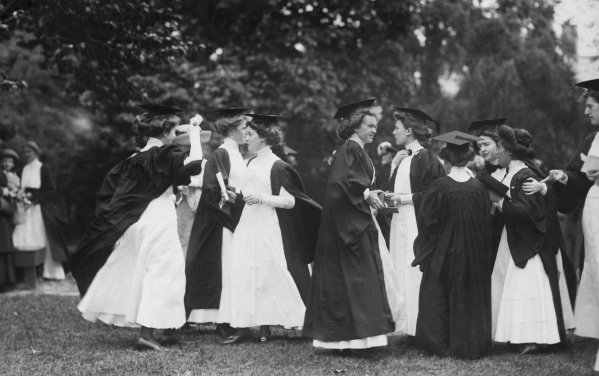 How Women With Access to Higher Education Changed America
Next Up: Editor's Pick