Mick Jagger Is Bewitching in The Burnt Orange Heresy

The Burnt Orange Heresy—director Giuseppe Capotondi’s adaptation of Charles Willeford’s 1971 art-world crime novel—has charisma to burn in the form of its stars. Claes Bang, the Danish actor who first sparked attention in an art-world caper of a different sort, Ruben Östlund’s wry 2017 The Square, plays James Figueras, a suave art critic who, we learn, doesn’t lead such a suave life. An illegal miscalculation has rendered him broke, though he’s still got his good looks: A cool blonde American, Elizabeth Debicki’s Berenice Hollis, picks him up while he’s giving a perfunctory, performative art talk in Milan. There’s a whirlwind overnight romance, after which the mysterious Berenice is ready to split. But Figueras persuades her to come on a road trip: An ultra-wealthy art collector, with a summer place on Lake Como, would like to see him. Would Berenice care to come along, for a weekend of luxe living in the sunshine, while Figueras takes care of some business?

Berenice says yes, and you’d think the prospect of seeing these two tall, glamorous beings tootle off together to the Italian countryside would be enough to sustain a whole movie. And it almost is: Capotondi and screenwriter Scott B. Smith have moved the action of Willeford’s novel from Florida to Italy, and, moviewise, it’s hardly a locale you’d want to kick out of bed: The light alone is lazily seductive. As we begin to learn more about Figueras and Berenice and their possible motives for doing whatever it is they’re doing, the movie’s tone shifts, too: Its sheen of sleek, elegant chilliness becomes colder and darker. Meanwhile, Bang and Debicki circle one another like a couple of mistrustful but turned-on cats. It doesn’t hurt that Donald Sutherland shows up as a whiskery, reclusive painter whose canvases are so rare that just one could fetch a fortune. Sutherland is great fun to watch as an eccentric who speaks mostly in riddles, yet ends up being the most forthright character in the story.

But one small thing—or perhaps one big thing— throws The Burnt Orange Heresy out of whack. Mick Jagger plays the debonair, nefarious art collector, Joseph Cassidy, and he’s terrific—but his role is so small that you long for more of him. Singers are often wonderful actors; the magnetism they bring to interpreting songs or performing onstage can translate beautifully to movies, and Jagger’s film appearances are proof. He’s marvelous in George Hickenlooper’s underappreciated 2001 The Man from Elysian Fields, not to mention Nicolas Roeg and Donald Cammell’s bone-rattling 1970 Performance, one of the greatest, strangest films of the 1960s (even though it didn’t appear until the dawn of the next decade).

Jagger’s appearance in The Burnt Orange Heresy—he shimmers into view, like Beelzebub, somewhere in the first half, and shows up again at the very end—only reinforced my rarely fulfilled wish that he’d do more acting. His body is slender and waifish, with the unstudied elegance of a grasshopper, but his head—disproportionately large, like Georges Méliè’s moon—commands attention. His face is a maze of wrinkles, not because he can’t do a thing about them, but because he wants every one of them there in its proper place. He looks his age and no age. Bang and Debicki are grand, and we’d be lucky to watch them in any movie. But it’s Jagger’s witchery you remember. Pleased to meet you—and at this point, there’s no need to guess the name. 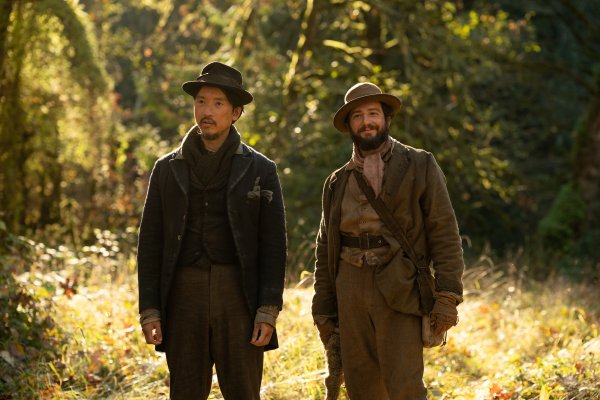 'First Cow' Is a Tranquil Reflection on Masculine Tenderness
Next Up: Editor's Pick