On a chilly Thursday afternoon, a well-prepared woman in a purple quilted jacket stood next to her husband, exhaled, and announced she was suspending her presidential campaign. Senator Elizabeth Warren declined to endorse either Senator Bernie Sanders or former Vice President Joe Biden, saying instead that she wanted to take time to think before making a decision about how to spend her considerable political capital.

“Let’s take a deep breath and spend a little time on that,” she told reporters. “We don’t have to decide that this minute.”

This week was a brutal comedown for Warren, who was running atop the polls for much of last year. But over the course of late 2019 and early 2020, her campaign made a series of missteps and suffered setbacks that resulted in her losing all four early states in the Democratic primary, then getting swept on Super Tuesday, including coming in a dismal third in her home state of Massachusetts.

In an unusual display of candor, Warren admitted that her theory of the race had been misguided. “I was told at the beginning of this whole undertaking that there are two lanes: a progressive lane, that Bernie Sanders is the incumbent for, and a moderate lane that Joe Biden is the incumbent for, and there’s no room for anyone else in this,” Warren said Thursday. “I thought that wasn’t right, but evidently I was wrong.”

Warren is personally beloved by her team, and as the news sunk in, staffers described a “sense of sadness,” “crying,” and an overwhelming feeling that that the best candidate for President had been let down. One staffer describes it this way: “You’ve got a 78-year old heart attack survivor and a 77-year old who’s clearly sundowning. And hey, you’ve got someone who might be broadly acceptable to both factions, but.. what? She’s a woman? Oops, never mind.”

“The only people I’m really mad at are the folks who knew she was the best and didn’t support her anyway,” the staffer says.

Warren was known for her iron discipline on the campaign trail, rarely straying off her “I’ve got a plan for that,” message and attacking her opponents in debates with withering precision. But on Thursday, she let down her guard. When a reporter asked her about how sexism played out in the race, she answered in a way that would have been impossible just 48 hours earlier.

“You know that is the trap question for every woman,” she said. “If you say, ‘Yeah, there was sexism in this race,’ everyone says, ‘Whiner.’ And if you say ‘No, there was no sexism,’ about a bazillion women think, ‘What planet do you live on?’”

The debate about that sexism — who fueled it, who benefited from it, and who resents it — may have major implications for Warren’s movement moving forward. Many progressives assumed Sanders would be the natural beneficiary of her supporters: the two progressives are ideologically similar, and both support Medicare for All and student debt forgiveness. Prominent Sanders allies, such as Rep. Ilhan Omar, publicly speculated on Twitter whether Super Tuesday would have gone differently if the the progressives had consolidated around Sanders the way moderates consolidated around Biden.

But it may not be so simple. According to a Morning Consult poll released Thursday morning, Warren supporters are roughly split between Sanders and Biden: 43% say Sanders is their second choice, while 36% would pick Biden.

“A bunch of people feel like she or they personally have experienced sexism from Bernie Sanders or from his supporters, or they’ve heard about it. And part of why they support her is her gender,” says progressive strategist Jess Morales Rocketto. “I think a lot of people feel like Warren did it exactly the right way: she did everything that people wanted, and it didn’t get her anything.” Rocketto says she’s heard from progressive women who say Warren’s demise makes them even angrier than Clinton’s in 2016.

Warren had positioned herself as the progressive who was both practical and friendly, and the next few weeks may test which parts of that identity were most resonant to her base. If they’re looking for a progressive, they’ll likely to go with Sanders — but the Warren supporters who were attracted to her tone and effectiveness may be up for grabs.

Progressive data strategist Sean McElwee says he expects the Warren vote to split towards Sanders by roughly 60/40, but that a significant minority will likely go to Biden. “Warren was able to build a coalition that sort of bridge some people who were more supportive of progressives and some people who were more supportive of the establishment,” he said, adding that her coalition included a lot of college-educated women who may prioritize getting rid of Trump over progressive revolution. “Obviously the harassment around the campaign has made it so that some people do not want to go vote for Sanders.”

Some say they’ll now back Biden. Esther Cabrera, a 51-year old IT engineer in San Antonio, who voted for Warren in the Texas primary, says she was already skeptical of Sanders because she had not seen any major legislative accomplishments in his three decades. The tone surrounding his campaign made it harder for her to overcome her reservations. “It always kind of turned into personal attacks, like I didn’t know what I was talking about,” she says. “Don’t flat out dismiss me if we cannot agree. We should at least be able to be civil if we disagree. The negativity was a big turnoff.”

Other Warren voters saw the writing on the wall and changed their votes at the last minute. Kellan Martz, a 35-year old affordable-housing attorney in Los Angeles, was a longtime Warren supporter who switched his vote to Biden on the day of the California primary. Martz said his original decision to back Warren was informed more by personality and practicality than by ideology.

“I know politics requires teamwork, and if a candidate is constantly using negative language about the ‘establishment’ or about ‘the media,’ that doesn’t say that you can build consensus to get his policies through. It’s also not someone I want to have as a president,” he says. “I want someone compassionate, and I don’t see that from the Bernie campaign and from his top staff.”

In the aftermath of a disappointing Super Tuesday, the Sanders campaign went into overdrive to try to woo Warren supporters to their camp. Hours after Warren suspended her campaign, Sanders addressed reporters to welcome her supporters into his campaign. “Today I would simply say to her supporters out there, of whom there are millions, we are opening the door to you,” he said. “We would love you to come on board.”

High-level surrogates seemed to realize that the shift from Warren to Sanders would take some work. “I do think that we have the opportunity to get many of her voters, but we have to earn them,” Rep. Ro Khanna, Sanders campaign co-chair, told TIME. “I don’t think it’s automatic, regardless of who she endorses. I think we have to reach out to those voters and convince them that we share a common vision.”

The Biden camp has taken a gentler approach. Biden and Warren spoke Wednesday, but the team hasn’t formally sought an endorsement, and they understand the likelihood that Warren might swing towards Sanders out of ideological allegiance. Inside Biden headquarters, a non-endorsement is seen as a win: it leaves Warren neutral, and implicitly rejects the idea that Sanders can beat Trump. Biden himself is said to have a deep respect for the Massachusetts Senator, and is reluctant to push her. He recalls that after his own failed presidential bids, he needed space to collect his thoughts on the golf course before moving forward.

But even if Warren does end up endorsing Sanders, there’s no guarantee that all her voters will follow her lead.

“There are two reasons why someone supports Warren: they really believe in her policy and her ability to implement them, or they really don’t like Bernie Sanders,” says Rocketto. “And I’m not sure that the last couple of weeks have made those people like Sanders more.”

—With reporting from Philip Elliott and Lissandra Villa 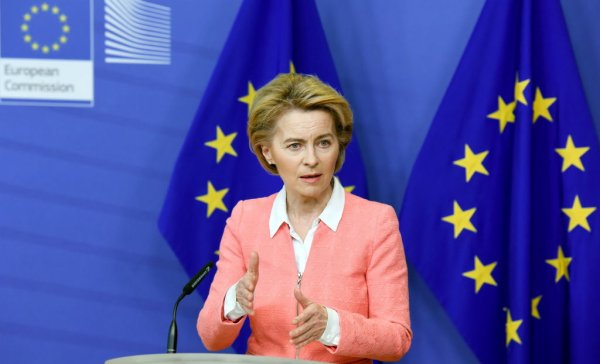