Weeks after removing a section from its Honor Code that banned displays of “homosexual behavior” among students, Brigham Young University (BYU) in Provo, Utah, released a letter this week “clarifying” that same-sex romantic behavior is still “not compatible” with the rules of the school.

In a Q&A sent to the school community along with Wednesday’s letter, Kevin Utt, director of BYU’s Honor Code Office, said that “any same-sex romantic behavior is a violation of the principles of the Honor Code,” meaning that students who date, hold hands or kiss same-sex partners will be disciplined.

BYU senior Kate Foster, 22, tells TIME that, when she got the news, she immediately began to cry. Foster had come out as queer just two weeks earlier — because she thought BYU had changed its policy. “I felt really, really hurt,” she says. She adds that a friend who identifies as lesbian turned to her and said, “there really is no place for me here.”

Brigham Young University is owned by The Church of Jesus Christ of Latter-day Saints. Its students have to adhere to a strict honor code in line with the Mormon church’s teaching, including not drinking alcohol and remaining celibate before marriage.

The Mormon church teaches that while experiencing same-sex attraction is not a sin, having same-sex sexual relations (in essence, acting on said attractions) is forbidden. BYU’s Honor Code previously included a section that banned “all forms of physical intimacy that give expression to homosexual feelings,” and students in violation thereof risked being punished or suspended, according to The Salt Lake Tribune.

Students had spoken out against the clause because they argued it unfairly banned behavior granted to straight couples, such as holding hands or kissing. In late February, news broke that the school had removed it from the Honor Code, promoting celebration from the campus’ queer community and beyond.

Daniel Spencer, a senior at BYU who identifies as gay, tells TIME that the weeks after the Honor Code’s revision was “the first time that it felt like I was in a place where I didn’t have to fake who I was.”

On Feb. 19, BYU tweeted that the school had updated the Honor Code “to be in alignment with the doctrine and policies of the Church” laid out in “the recently released general handbook of The Church of Jesus Christ of Latter-day Saints.”

But, that same day, BYU tweeted that there may have been some “miscommunication as to what the Honor Code changes mean.” BYU did not specify what any such “miscommunication” could have entailed.

Franchesca Lopez, a BYU senior who identifies as queer, said that she spoke with an honor code officer after the Feb. 19 tweet and was told that romantic behavior between same-sex couples was no longer prohibited by the office. She claims that she was explicitly told that “the honor code office will not be punishing students for policies that it doesn’t have.”

Multiple other BYU students also tell TIME that they were told by the Honor Code Office that it would not longer penalize students for romantic behavior between same-sex couples.

But on Wednesday, BYU issued a letter from Elder Paul V. Johnson, the commissioner of the Church Educational System, which oversees BYU and a number of other Mormon schools. In the letter addressed to “students, faculty and staff of the Church Education System” he said that the recent changes to the honor code had “led to much discussion and some misinterpretation”and said his office was issuing the “clarifying statement” out of “respect for all concerned.”

“Same-sex romantic behavior cannot lead to eternal marriage and is therefore not compatible with the principles included in the Honor Code,” he wrote. As of Thursday, BYU has not put the “homosexual behavior” clause back in its Honor Code, but Johnson’s statement appears to implement a similar stance, and is being widely read thusly.

When asked why the school had removed the section on “homosexual behavior” from its honor code if related behaviors remained incompatible with BYU rules, Carri P. Jenkins, assistant to the president for university communications at BYU, tells TIME in an email that, “The Honor Code was changed to create a single standard for all CES institutions that is consistent with the recently released General Handbook of the Church. All along, we have reiterated that even though we removed the more prescriptive language, the principles of the Honor Code remain the same.”

Regarding students’ claims that they were told that same-sex romantic behavior would not be punished, Jenkins said in an email, “I would continue to emphasize that we have always made clear that the principles of the Honor Code remain the same; our focus going forward is to assist our students based on the clarification we have received.”

The handbook is meant to help Mormons around the world understand the church’s programs, policies and procedures, as well as how best to implement them in their lives.

Roni Jo Draper, a professor at BYU who teaches education and women’s studies, tells TIME that she’s seen “a lot of confusion and sadness and anger” among her queer students. She adds that the decision to leave the “homosexual behavior” clause out of the Honor Code, while still banning same-sex displays of affection, is likely to be confusing for future students.

Lopez says when she received Johnson’s letter on Wednesday, she “just felt so stupid and taken advantage of.”

“So many people here don’t even date for marriage… and do things that are not leading to marriage, and that’s not punished by the Honor Code Office,” she continues. “This is explicitly homophobic.”

A BYU junior who identifies as bisexual tells TIME that she had drafted a letter coming out to her parents, but decided not to send it after yesterday’s letter. She says she felt “shocked” and “betrayed” by BYU’s reversal. (TIME is choosing to withhold the student’s name out of respect of her privacy.)

Lilly Bitter, a 22-year-old junior at BYU, also says that she “came out more publicly to a lot of people,” including her mother, after the Honor Code’s initial revision. “Then I found out about this and it’s like, oh shoot, ‘I could get in trouble.’ It felt like a trap in a way,” she continues. Bitter says the fact that the decision came from the Church Education System “made it harder in a lot of ways because it felt like an explicit rejection from my church, not just my school.”

The Salt Lake Tribune reports that hundreds of students protested in the campus quad on Wednesday afternoon, shouting chants like “Jesus said love everyone” and “The Honor Code is honor-less.” Lopez says they did not immediately hear any response from the administration, but students plan to march every day at 1 p.m. until they do.

“I did everything right. I honored the honor code, I asked counselors… and now what do I have to show for it?” Lopez told TIME in a text message. “Protests are important because when traditional means of achieving [socially] acceptable goals aren’t accessible in [socially] acceptable ways, there has to be a way to be heard.”

BYU did not respond to TIME’s request for comment on the protests. When asked if the school had any further comment, Jenkins directed TIME to Utt’s Q&A, in which he said, “We realize that emotions over the last two weeks cover the spectrum and that some have and will continue to feel isolation and pain. We encourage all members of our campus community to reach out to those who are personally affected with sensitivity, love and respect.“

While Daniel Spencer says he’s deeply sad by the school’s announcement, he’s not shocked. He points to the church’s 2015 policy that banned the children of same-sex couples from being baptized, which was then repealed in 2019.

“It just seems like we’re constantly being tossed back and forth… people can’t make up their mind about how to treat us in this community,” he says. “There’s no clear sense about whether or not we belong here.” 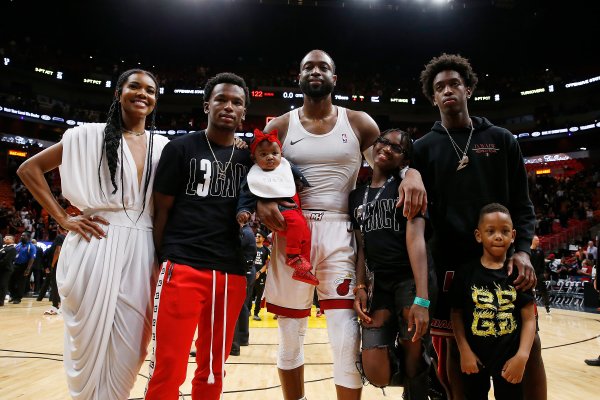 Gabrielle Union and Dwyane Wade on Supporting Zaya
Next Up: Editor's Pick