Another cruise has gotten caught up in the coronavirus outbreak, this time it’s a West Coast-based ship currently headed to San Francisco.

Authorities are tracking down passengers who disembarked from the Grand Princess in San Francisco last month after a fellow cruise-goer died of the virus, according to health officials in California. Health officials in Placer County believe the 71-year-old man was exposed to the infection during a round-trip voyage to Mexico from Feb. 11 to Feb. 21.

California Governor Gavin Newsom said roughly 2,500 passengers traveled on the same voyage as the Placer County victim. It’s possible they may have been exposed.

After returning from Mexico, the Grand Princess set sail for Hawaii, with 62 people from the first trip staying onboard. But the vessel was ordered to turn around after the Centers for Disease Control and Prevention notified the company it was investigating “a small cluster” of virus cases tied to the Mexico cruise, Princess Cruises said in a letter to passengers Wednesday.

Princess Cruises said Thursday that there are currently no confirmed cases of COVID-19 on board. In a previous statement on Wednesday, the cruise line said the CDC has identified “fewer than 100 guests and crew” who will be tested before arriving in San Francisco. They included “guests and crew who have experienced influenza-like illness symptoms”, “guests currently under care for respiratory illness” and “guests who sailed the previous Mexico voyage and remained onboard for the current Hawaii voyage.”

The U.S. Coast Guard would deliver testing kits to the ship Thursday morning. Tests will be administered and transferred to a California state lab later in the day with results anticipated early Friday, according to Mary Ellen Carroll, executive director of San Francisco’s Department of Emergency Management. Health officials have said no guests will be allowed to disembark “until all results have been received,” according to the cruise line.

More than 2,300 passengers and 1,000 crew members are on board the ship, Carroll said at a press conference on Thursday. Thirty-five of these people have shown flu-like symptoms at some point during the cruise and many have already recovered, she said.

It’s also unclear whether the ship will end up docking in San Francisco.

Carroll said that federal and state authorities will determine the most appropriate location for the ship to dock — a place that “needs to provide for the safety of the surrounding community, as well as the passengers and crew.”

San Francisco Mayor London Breed said at the press conference that the city is doing “everything we can to work with state and federal partners to prepare” if the ship does arrive in San Francisco but that “there are certain criteria that must be met before that occurs.”

The 62 passengers who remained onboard after that initial trip are now required to stay in their rooms until they have been screened and cleared by medical staff.

News of the cruise ship-linked death prompted Newsom to declare a state of emergency in California, where 53 cases of coronavirus—officially called COVID-19—have been confirmed. The patient from the cruise ship is the state’s only death. Placer County Public Health said the man was an elderly adult with underlying health conditions. He tested positive for the virus Tuesday.

At least 215 coronavirus cases have been diagnosed in the U.S., according to the Johns Hopkins University virus tracker as of 4 p.m. E.T. At least 16 states have recorded cases.

Globally, the virus has infected over 95,400 and killed more than 3,200, the vast majority in mainland China. But the disease has spread rapidly around the world over recent weeks with thousands of cases now in South Korea, Iran and Italy.

Grand Princess is the sister cruise of Diamond Princess, which was quarantined in Japan for two weeks after the company learned that a passenger on a previous voyage was diagnosed with the virus. More than 700 people out of around 3,700 on board were diagnosed, prompting criticism about the effectiveness of a quarantine that ended with almost one in five people infected. 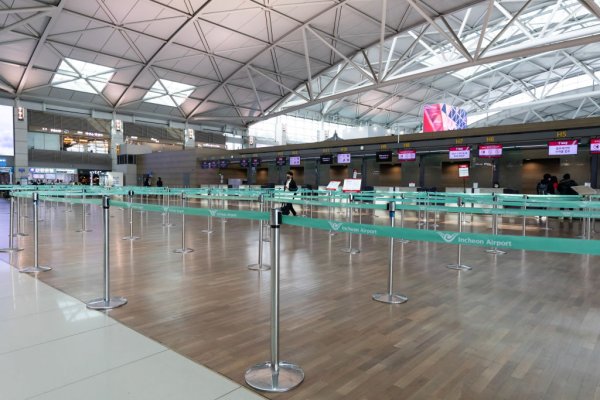 Should You Cancel Travel Plans Amid COVID-19 Concerns? Here's What to Consider
Next Up: Editor's Pick