Albert Einstein celebrating his 70th birthday with children from a displaced persons camp on Mar. 13, 1949, at his home in Princeton, N.J.
Gamma-Keystone—Getty Images
By Olivia B. Waxman

Albert Einstein’s March 14 birthday is always cause for celebration. In past years, children in Princeton, N.J. — the theoretical physicist’s home for about two decades — have participated in an Einstein look-alike contest, and in San Francisco people would sing him the Happy Birthday song while circling a shrine to Pi at the Exploratorium science museum. (March 14 is also known as Pi Day for its tie to the first digits of Pi, 3.14.)

Such elaborate celebrations are ironic because Einstein was known for eschewing birthday parties. “It is a known fact that I was born, and that is all that is necessary,” he told a Princeton High School student journalist in 1935.

One birthday party he did like, however, was for his 70th — thanks to some very special visitors.

On March 13, 1949, the day before Einstein’s birthday, children who had just been relocated to the U.S. from a displaced persons camp in Europe visited his home in Princeton, where he taught at the Institute for Advanced Study. Even four years after World War II ended, many who had been made homeless by the war had yet to be settled.

One of the children brought to the U.S. was even related to Einstein: 11-year-old Elizabeth Kerzek, a distant cousin, who met her famous relative for the first time at this celebration. In the photo above, the man next to Einstein is William Rosenwald, an honorary president of the United Service for New Americans (USNA), the organization that brought the children over, as well as chairman of United Jewish Appeal.

During this 70th birthday celebration, Einstein received a bouquet of flowers as a birthday present, and he had a gift for the children too: a box of chocolates and dried fruit, the Associated Press reported. Birthday-party activities included taking turns sitting on his lap and playing with his pet terrier Chico.

At the birthday celebration, Rosenwald reportedly vowed to Einstein that all displaced persons camps would be “empty” and all displaced European Jews would be relocated to places like the U.S. and Israel, which had only recently become a nation, by year’s end — a “pledge” that Einstein described as a “magnificent birthday gift,” according to the New York Times.

In fact, Philippe Halsman, who was there to photograph Einstein’s birthday party, was one of several people who the scientist himself had helped come to the U.S. in 1940 after the Nazis invaded France.

Einstein could relate to the plight of being uprooted, as a German Jewish refugee himself. He came to the U.S. in October 1933, months after he was forced to flee his Berlin home because he was “widely thought to be public enemy number one of the Nazis” after criticizing the repressive policies implemented after Adolf Hitler came to power, as scholar Andrew Robinson wrote for TIME.

That same year, Einstein had helped establish the American branch of the International Relief Association, a European forerunner to the International Rescue Committee, which aimed to rescue those threatened in Nazi Germany. Up until his death on April 18, 1955, he used his name recognition from developing a general theory of relativity to help others come to the U.S. to escape persecution, serving as an honorary president of the French Jewish social welfare organization OSE (short for Œuvre de Secours aux Enfants, or the Children’s Aid Society).

During the war, he advocated on behalf of innocent children who were victims of persecution orchestrated by adults. For example, in the archives of the humanitarian organization American Jewish Joint Distribution Committee, there’s a June 25, 1941, letter in which Einstein thanked the organization’s chairman for facilitating the arrival of more than 100 rescued children from France, and giving them “a new lease on life,” and he lamented what they had to endure before reaching adulthood.

“Torn away from parental care and love, thrown from country to country, from place to place, delivered out to senseless persecution…having to face the dreadful confinement in a concentration camp,” he wrote. “Efforts to save these children must not slacken… I therefore turn to you with the urgent plea to keep the problem of the evacuation of the refugee children in the forefront of your attention.” 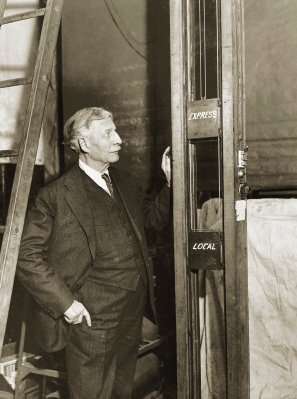 How Electric Elevators Transformed the Modern City
Next Up: Editor's Pick