Will Joe Biden Get a Boost From Religious Voters on Super Tuesday?

For weeks, Joe Biden’s dark blue campaign buses have declared that the former Vice President is battling for the “the soul of the nation.” On the campaign trail, he has regularly cribbed from the Pope and the Bible, and offered parables that would be perfect fits in Sunday school lessons. And his criticism of the President he hopes to oust from the White House in November has been as much an indictment of his policies as a moral judgement of the man himself.

As the country’s first Catholic Vice President, Biden is keenly aware of the potency of faith, both for his soul and for his political fortunes. Scrambling to catch up with frontrunner Bernie Sanders, Biden’s team is banking on the candidate’s popularity among voters of faith in the most consequential day of voting yet this year. On Super Tuesday, balloting began from Jordan, N.C., to West Jordan, Utah, in a stretch of contiguous states that traces both the Bible Belt and the faith-heavy states of Alabama and Texas. Of the 14 states picking a presidential nominee on March 3, more than half rank among the most religious states in the country, according to the Pew Center for Religion and Public Life.

Biden advisers argue that he weaves faith so easily into his campaign because it’s at his core, having spent the first 10 years of his life in a working-class Irish-Catholic home in Pennsylvania. “Faith-and-values voters are always looking for authenticity. You can’t fake that in a candidate,” says John McCarthy, Biden’s deputy political director and point-man on matters of faith at campaign headquarters. “For Joe Biden, this isn’t a one-off. This is who he is.”

Catholics, evangelical Latinos, Muslims and Jews evidently agree, showing strong support for Biden at this point in the race, while Sanders has seen his support drop off in more religious constituencies. In South Carolina, where only 17% of Democrats said they never attend religious services, Biden soared over the Vermont senator by a 41-point margin. In largely secular New Hampshire, where 51% of voters said they never attend religious services, Sanders’ support was double that his support among the 13% who attend weekly. At the same time, Biden saw his support almost triple among those who attend services weekly versus those who never attend in New Hampshire.

In other words, the more religious the voter, the better Biden has fared in this race. And he is heading into some pretty religious terrain. According to Pew’s methodology, 77% of Alabama residents are “highly religious,” with 73% saying the pray every day and 82% saying they are absolutely certain God exists. It ranks as the most religious state in the country, and in 2017 broke stereotype when it sent a Democrat to the Senate.

In Tennessee, which is also voting on Super Tuesday, 73% of the population identifies as “highly religious,” 70% say they pray daily and 78% are certain of God’s existence. Arkansas, Oklahoma, North Carolina, Texas, Utah and Virginia are in close pursuit by this metric.

From the beginning, Biden has woven a message of faith to appeal to these voters into many his standard talking points. When Biden talks about climate change, he has borrowed language about a “moral obligation” from the teachings of Pope Francis. When he has criticized Trump, it’s often been tied to the incumbent’s lack of moral character. At last week’s CNN town hall in Charleston, S.C., Biden spoke about finding purpose after his family members’ deaths through faith. “I’m not trying to proselytize. I’m not trying to convince you to share my religious views,” he said, but it was clear faith helped pull him through son Beau Biden’s death in 2015.

Behind the scenes, Biden’s team has been leading a weekly call with leaders of all faiths to get feedback about policy, politics and personnel. His advisers often ask the group for broad gut-checks or advice and makes clear that Biden’s team is listening if there’s something one of these leaders thinks needs dealt with immediately.

Biden is not the only candidate to spot an opportunity among the faithful. Tuesday is the first time Biden will go head-to-head with Mike Bloomberg, the media billionaire who got in the race after filing deadlines had passed for the lead-off states. In the last 12 weeks, he has spent hundreds of millions of dollars on advertising and outreach, and he, too has been making a concerted effort at reaching voters of faith.

Bloomberg advisers say the former Mayor has been emphasizing his philanthropy, trying to guide faith leaders toward a “lightbulb moment” when they connect Bloomberg’s deep pockets for good causes with their own teachings about taking care of the less fortunate. The former mayor initially sought support from individual pastors but he heard quickly that it would be more efficient to go to the tops — to denomination heads or bishops, for instance — to get feedback on proposals on topics like affordable housing or economic justice.

That’s not to say faith alone is powering Biden or Bloomberg as the leading contenders to derail Sanders. The political ground seems to be shifting quickly, with mainstream Democrats coalescing around Biden after Pete Buttigieg and Amy Klobuchar ended their bids and endorsed their one-time rival. Beto O’Rourke came off the sidelines to back Biden, too. African American voters — who tend to be persons of faith — stood with Biden in South Carolina and appear ready to do so across the South on Super Tuesday. 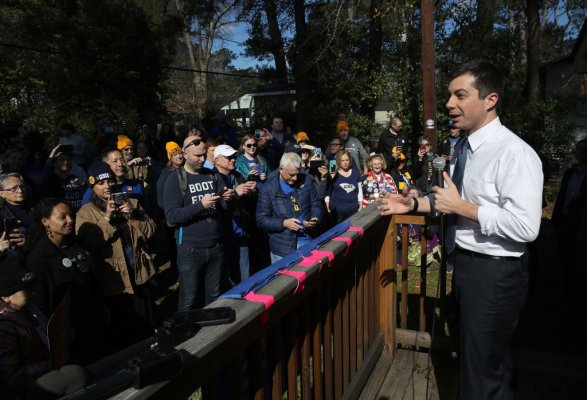 Pete Buttigieg is Not Optimistic About South Carolina. But He's Pushing On.
Next Up: Editor's Pick