Stephen Colbert during the "Been There: Won That: The Returnification of the American-Do Troopscapeon" special of The Colbert Report on Sept. 8, 2010 in New York City.
Scott Gries—Picturegroup/Comedy Central
By Noah Rayman

Stephen Colbert will take over as host of the Late Show when David Letterman retires, CBS announced Thursday.

Colbert, the host of Comedy Central’s The Colbert Report since 2005, was rumored to be CBS’s top choice to replace its iconic late night host. Letterman said last week on his show that he will retire in 2015, ending more than three decades in late night.

“Stephen Colbert is one of the most inventive and respected forces on television,” CBS president and CEO Leslie Moonves said in a statement. “David Letterman’s legacy and accomplishments are an incredible source of pride for all of us here, and today’s announcement speaks to our commitment of upholding what he established for CBS in late night.”

Colbert’s ascension will mark a touchstone for his career, which first gained traction while he was a contributor on The Daily Show with Jon Stewart, and then exploded when he got his own show following Stewart’s.

“Simply being a guest on David Letterman’s show has been a highlight of my career,” Colbert said in a statement. “I never dreamed that I would follow in his footsteps, though everyone in late night follows Dave’s lead.

“I’m thrilled and grateful that CBS chose me,” Colbert said, before adding a playful dig at Letterman’s teeth: “Now, if you’ll excuse me, I have to go grind a gap in my front teeth.”

As Late Show host, Colbert will drop the caricature of a conservative pundit he has played to great effect at Comedy Central. Colbert has become known for almost never breaking character in public.

“I won’t be doing the new show in character, so we’ll all get to find out how much of him was me,” Colbert told ABC. “I’m looking forward to it.”

CBS said the producers and the location of the new Late Show have not yet been determined. The network said a premiere date for the show will be determined after Letterman decides when his last show will be. 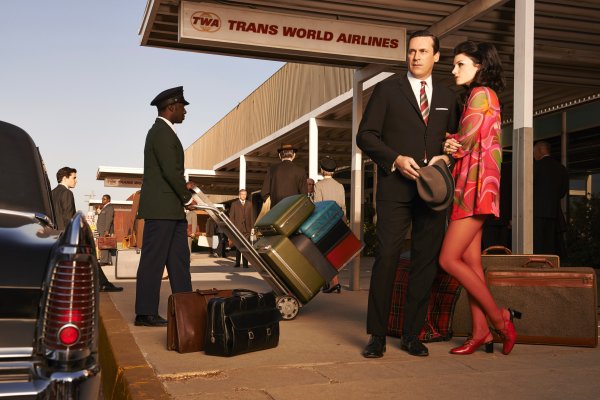 How Mad Men Gets the Writing Right: Q&A
Next Up: Editor's Pick