A lion in Copenhagen Zoo eats the remains of young giraffe on Feb. 9, 2014.
Kasper Palsnov—AFP/Getty Images
By Lisa Abend

The killing of Marius the giraffe at a zoo in Copenhagen surprised many people around the world — and shocked quite a few — but it was no isolated incident. Also put down by European zoos in the name of genetic diversity in recent years: Zebra, antelopes, bison, pygmy hippos, and tiny Red River hog piglets.

Although zoo officials may not publicize the fact, culling is often a normal part of a zoo’s breeding program and conservation efforts. But as those breeding programs become more successful — especially with popular animals like giraffes — euthanasia is also becoming more controversial.

“As a conservation organization, we realize that there’s a crisis in the natural world, and that we have an obligation to protect species in the wild from human actions,” says David Williams-Mitchell, communications and membership manager for the European Association of Zoos and Aquaria (EAZA). “One of the ways we do that is through breeding programs. But we have limited space within EAZA to carry out that, and we need to prioritize animals that can contribute to future of the species.”

The killing of animals under the protection of zoos is the ironic price of success: a zoo whose breeding program manages to produce enough healthy offspring may find itself having to put down some of those individuals in order to make room for species in greater danger of extinction. Zoos, after all, only have so much space. “You have to understand that zoos today are in a position to go deeper into conservation,” says Friederike von Houwald, curator of Switzerland’s Zoo Basel. “We can very precisely identify not just an entire species, but a particular line of species that needs protection.”

Marius was not from one of those lines and that sealed his fate. But he is hardly alone. Although considered a last resort (“we don’t do it even once a year,” says von Houwald of her zoo), euthanasia is a regular tool for biodiversity and population management in many European zoos. In the past few years, river hog piglets, pygmy hippos, tigers, antelopes, bison, and zebra have all been put down in European zoos for biodiversity reasons. Although EAZA has figures from recent years, it does not release them because of their sensitivity. “We’re not ashamed of euthanizing animals,” says Williams-Mitchell. “But we don’t want to publicize it either.”

Although Marius was the first giraffe to be put down at the Copenhagen zoo, members of other much-loved species have been euthanized. In the spring of 2012, the zoo put down, via lethal injection, two leopard cubs whose genetics were over-represented. “We cull antelopes and wild boar at the zoo every year for the same reason,” says Bengt Holst, the zoo’s scientific director. “I don’t understand the outrage.”

But as breeding programs meet ever greater success, outrage is increasingly the reaction to these policies, especially when the animal being put down is popular or especially adorable. In 2010, the decision by officials at Edinburgh zoo to put down two hog piglets named Sammi and Becca sparked protests. That same year, a court in Germany ruled that the Magdeburg zoo director and three workers were guilty of violating animal rights law for putting down three tiger cubs. Marius’ death also provoked ire from animal rights organizations and social media exploded in rage and sadness, as people around the world criticized the zoo for callously disregarding the animal’s welfare. Nearly 30,000 people signed an online petition asking that the young giraffe’s life be spared.

Yet zoo experts maintain that euthanasia — even of a healthy animal — is frequently the most responsible course. Neutering and contraception prevent the animal from performing behaviors that are critical to its sense of well-being — namely reproduction and parenting. And even separating males and females for a length of time can have unpredictable outcomes: rhinos who have been prevented from mating for a few years have not been able to reproduce once the males and females were reunited.

Other alternatives are similarly problematic. “Releasing a giraffe that had spent his entire life in captivity into the wild would have been a death sentence,” says Williams-Mitchell. “It may sound counter-intuitive; why not let the giraffe take its chances? But it seems needlessly cruel to ship an animal thousands of miles, only to release it to what is the same outcome it would have at home.”

Nor does space in another zoo necessarily equal a solution. In Marius’ case, one of the zoos that offered was rejected because, as a member of EAZA, it faced the same genetic over-representation as Copenhagen. Another was not an EAZA member, which is a problem in its own right: there was no guarantee that the new zoo complies with animal welfare standards. That same problem applies to individuals who have offered to help, including the anonymous person who offered 50,000 euros for Marius.

“We had the same thing happen with one of our zebras a few years ago that we planned to euthanize because of overrepresentation,” says von Houwald. “Someone wrote to say, ‘I can take the zebra because I have room in my horse stable. But as a zoo you have a huge responsibility to make sure this living creature is properly cared for. A zebra isn’t the same as a horse.”

That zebra, like Marius, became lion food. Another thing many people don’t realize about zoos: most euthanize animals regularly for meat to feed their carnivores.

One of the things distinguished Marius’ case was the Copenhagen zoo’s openness about it. Although the giraffe was anesthetized and shot in a private area of the zoo, his autopsy was held outdoors, in an area specially opened for visitors who wished to observe the procedure. Although some critics saw this as further evidence of a lack of empathy, the zoo itself has said it was important to opt for transparency.

That’s a sentiment with which EAZA agrees. “[The euthanasia] is a reminder of the cost of human actions,” says Williams-Mitchell. “The reason that zoos have to protect species in the first place is only partly due to poaching and illegal trade. It is also because of climate change and the wholesale pillaging of these animals’ natural habitat. Until people start to take responsibility for their actions and their lifestyle decisions, scientists who want to protect animals like Marius will continue to have to make hard decisions.” 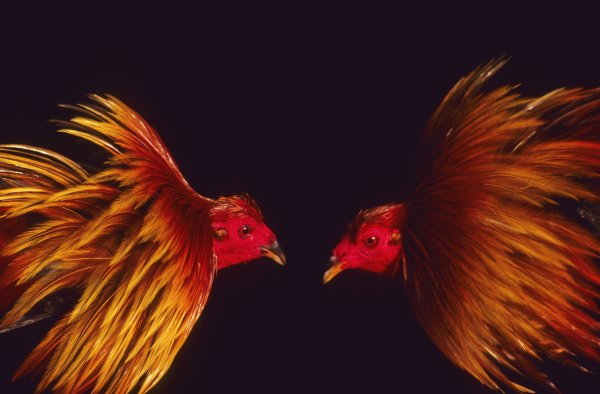 'Operation Angry Birds' Swoops In On Massive Cockfighting Circuit
Next Up: Editor's Pick