I Fought the Taliban. Now I'm Ready to Meet Them at the Ballot Box.

Afghan protesters march for peace and ceasefire as they hold banners in the Kandahar province on Jan. 17, 2019.
Javed Tanveer—AFP via Getty Images
Ideas
By Amrullah Saleh
Saleh is the Vice President-elect of Afghanistan. He previously served as the Interior Minister.

On September 26, 1996, the Taliban captured Kabul. I was a junior staffer at the Afghan Ministry of Defense. My job was mainly liaising with foreign and local media, international aid organizations and the small diplomatic community in the country then. I fled with the retreating forces to my hometown in the northern Panjshir Valley, and followed the news with close attention, curious to see how the Taliban would deal with Afghanistan’s urban population in the capital city.

The headlines revealed nothing but horror. The Taliban’s entry into Kabul was much like how Pol Pot’s Khmer Rouge stormed the Cambodian capital. The Talibs hunted down former Afghan President Mohammad Najibullah, who had governed Afghanistan with Soviet backing from 1985-1992, seizing him and his brother from a UN compound where he’d sought refuge four years earlier. They brutally and publicly tortured both men, hanging their bloodied bodies from a lamp post near the presidential palace.

A few days later, horror hit closer to home. The Taliban were hunting me, as I had fought them for years. They found my elder sister, Mariam, then in her fifties, and beat and tortured her, trying to force her to reveal my location. She refused. Later, the Taliban returned to her neighborhood to demand she turn over her daughters to be married off to their fighters. She was able to escape with them, fleeing the city altogether. My sister struggled with that memory until she died in 2016.

I share the story of my sister to explain the more personal reasons behind my resistance to making peace with the Taliban. The Taliban claim that they provide protection to women in accord with the Islamic teachings and Afghan customs. But beating a frail woman to find her brother does not follow Islamic law nor Afghan custom. This was just one story of the physical and psychological abuse Kabulis and people throughout Afghanistan endured during Taliban rule.

My view of the Taliban changed forever because of what happened in 1996, and I haven’t seen or heard anything to make me believe they have truly changed their ways. Resisting their brutal rule is a noble fight, not a conquest for power but in defense of humanity. For me, the fight has been justified on grounds of societal, cultural, political and historical values, not just abstract intellectual reasoning.

The Taliban’s invasion of Kabul in the late nineties turned a cosmopolitan city into a ghost town, filled with Taliban fighters, Pakistani jihadists and Al-Qaeda fighters. The population shrank to nearly half a million and people fled to the neighboring countries. Afghans quickly became the largest refugee community in the world. The Taliban’s medieval behavior with the urban Afghans was one of the key reasons why the militants couldn’t hold the capital for more than few weeks, when U.S. forces invaded in 2001. The Taliban lost the entire country in less than six weeks’ time.

Today there are seven million people in Kabul, many fearing a repeat of the Taliban’s medieval rule. The Taliban have staged a military comeback, but our intelligence agency, which I once led, has found nothing to indicate they’ve changed their original goals. They claim that they fight the foreign forces led by the U.S. Wrong. They fight to impose an alien medieval ideology in the name of religion.

Their main advocate in this fight continues to be Pakistan, which I believe wants to turn Afghanistan into a wasteland with no owner – a virtual client state – as a way to expand its writ across Central Asia, and gain the upper hand over its enemy India. Back in the 1980s, Pakistan sided with the U.S., backing Afghan jihadists to expel the Soviet Red Army from Afghanistan. When the U.S. withdrew support for the jihadists, Pakistan stepped in, exercising outsized influence on its proxies, who became today’s Taliban. Pakistan’s economy is struggling, but it has a basket of extremist groups on its payroll, including the Taliban, and a list of likely misdeeds from meddling with its neighbor to blackmailing foreign powers. We are tired of being caught in the middle of this proxy war, but unbroken. We haven’t traded away our pride and sense of honor, nor retreated into docility despite pressure from our neighbors or outside powers. Good or bad, this is who we are.

I fought the Taliban under the legendary Northern Alliance leader Ahmad Shah Masood, who was assassinated on 9 September, 2011, two days before the attacks on World Trade Center in New York. Al Qaeda feared his alliance with the West, and thus they removed him first, knowing he would fight them fiercely when the Americans came for them.

More recently, associates of the Taliban tried to kill me. On July 29th, 2019, on the first day of my campaign as vice president, my office was stormed by a squad of suicide attackers affiliated with the Haqqanis—the fighters commanded by Sirajuddin Haqqani who just penned an opinion piece in The New York Times, claiming his side is ready for peace. His gunmen killed some 30 people, mostly young staffers of mine, including two of my nephews. I only survived because they sacrificed their lives to buy enough time to enact a long-planned escape plan, enabling me to reach another building via the rooftop. I remember their loss every day.

Now, as the Vice President Elect of Afghanistan, I have a very active role in the peace process. I am not seeking revenge. No, and never. This has been a fight to defend human dignity, our pluralistic society and pan-Afghanism. I am following in the footsteps of Commander Masood, who was a strong believer in pluralistic society and stood for elections as the only legitimate way to achieve national power. Two decades after his death, his legacy lives on in the aspirations of young Afghans and world powers who echo him saying the time for tyrannical rule is over. The will of people must be respected.

In that spirit, I am ready to make peace with the Taliban on the battlefield, and fight them in a very different arena: at the ballot box. President Ashraf Ghani and I come from very different backgrounds, but we have zero differences on what our legacy should be: a unified, pluralistic Afghanistan at peace with itself and with the world. We are calling upon the Taliban to lay down their arms and join the battle of ideas, waged in our Parliament and decided upon by our voters. If Taliban think they have a popular base in the country, then they should join the electoral process and seek to win.

The cost and pain of war has never been an abstract for me. I served as Afghanistan’s intelligence chief from 2004 to 2010, so I know the Taliban. I’ve dealt with them in talks before 9/11 in Switzerland, Tashkent, and Ashgabat and also inside Afghanistan. They know me, too. I am a victim and survivor, a politician, an intelligence officer, and an anti-Taliban fighter. My enemies say I am as guilty as they are in perpetuating this war. All that is true. But today we have a choice to choose new titles for ourselves. Let’s change the past and make ourselves peace builders. The choice is ours – together. Let’s do it. 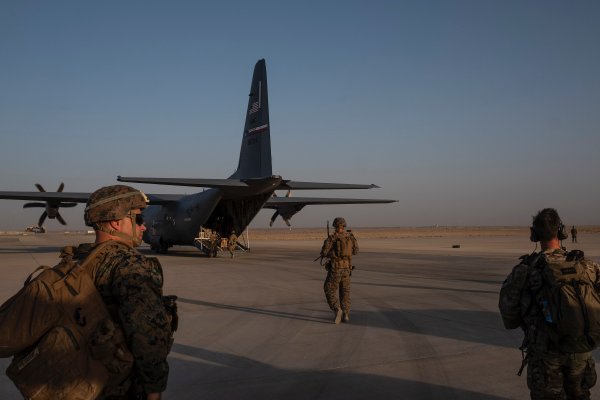 What Peace in Afghanistan Might Mean
Next Up: Editor's Pick