A Silent Epidemic? Experts Fear the Coronavirus Is Spreading Undetected in Southeast Asia

As coronavirus cases continue to soar globally, in at least one region a steady façade of optimism persists. Southeast Asia’s foreign ministers have joined hands with China and declared their intention to “stay strong!”

Yet their hastily called meeting in secretive, socialist Laos last week suggests not so much resiliency as the need to shore up mutual support. Health experts are widely skeptical of the numbers reported by China’s neighbors, and believe the deadly infection is spreading undetected throughout much of Southeast Asia.

With infection clusters increasingly sprouting outside the mainland, where the virus originated, many fear these pockets—rooted out or not—are sustaining the outbreak and pushing the world toward a global pandemic.

The disease, officially COVID-19, has sickened over 83,000 and killed more than 2,850, primarily in China. But cases have spread to more than four dozen countries, and been identified as far away as Brazil and Finland.

Strangely absent from the list are Myanmar and Laos, which border China, as well as Brunei, East Timor, and Indonesia—of which the latter had daily, direct flights to the virus epicenter, Wuhan. Every other country in the region, all beneficiaries of Chinese aid, investment and tourism, has reported cases.

“The transmission dynamics of this virus are like the flu. It’s very, very difficult to stop,” says Richard Coker, a Bangkok-based professor emeritus of public health at the London School of Hygiene and Tropical Medicine.

At the beginning of the outbreak, several of these governments downplayed the severity of the threat, publicly voicing their wariness of offending the superpower upon whom their economies rely. In lieu of public health precautions or stringent defenses, they offered folk remedies—suggesting everything from consuming onions or alcohol to working less to ward off coronavirus.

“Surely the desire not to alienate China was a factor,” says Joshua Kurlantzick, senior fellow for Southeast Asia at the Council on Foreign Relations. “Overall, the region is just so heavily tied to China now.”

In Cambodia, which has increasingly gravitated into China’s orbit, Prime Minister Hun Sen insists he won’t cut air travel, beyond suspending the six weekly flights from Wuhan. He also refuses to evacuate citizens stranded in Wuhan, as other countries have done. While Beijing chided the U.S. for banning Chinese travelers, saying it “set a bad example,” Hun Sen earned plaudits when he flew to China earlier this month.

“A friend in need is a friend indeed,” he wrote on his official Facebook page.

But Hun Sen’s vehement denial of the disease’s risks has stoked fears that Cambodia, a tourism hotspot with limited health resources, will become yet another vector of transmission.

“The cost of his decision is the health of his people,” says Sophal Ear, an expert on Cambodian politics at Occidental College in California. “Cambodia has become the weakest link: a country with poor health care, poor disease surveillance, and a long rap sheet of non-reporting.”

Earlier this month, a study by five researchers at the Harvard T.H. Chan School of Public Health concluded that it is statistically implausible that Cambodia and Thailand do not have more cases, and virtually impossible that Indonesia, the world’s fourth most populous country, has not reported a single one. Based on its direct flights from Wuhan, the archipelago should have at least five patients by now, the study found.

It’s not that these countries are getting lucky, says Marc Lipsitch, director of Harvard’s Center for Communicable Disease Dynamics, and one of the study’s authors. “They’re missing infections.”

About 2 million Chinese tourists visit Indonesia annually, mostly holidaying in Bali. According to China’s consulate there, 5,000 Chinese tourists, 200 from Wuhan, were visiting the resort island when news of the outbreak suspended flights on Feb. 5. Most were not quarantined or tested.

An Indonesian health official monitors as passengers from an international flight pass a thermal scanner upon arrival at the Adisucipto International Airport in Yogyakarta, Indonesia on Jan. 23, 2020.
Ulet Ifansasti—Getty Images

“I think the surveillance we’re doing now is too loose.”

Doctors in Indonesia are not testing all respiratory infections for coronavirus, relying instead on weeding out suspected patients by their links to known cases or their travel history, she says.

But cases have already turned up in several countries among those who have not been to China. Missing one potential carrier can lead to further infections that can’t be linked to travel, meaning more and more patients who might never be screened.

“You can’t find things you don’t look for,” says Lipsitch, the Harvard epidemiologist. “We estimated that even high surveillance countries were missing about half their imported cases.”

He predicts that a global coronavirus pandemic is “likely” and that 40 to 70 percent of the world’s population could be infected (though they won’t all become sick).

‘So what can we investigate?’

In Indonesia, despite mounting evidence to the contrary, security minister Mohammad Mahfud MD has told reporters “the coronavirus does not exist” in the country.

Indonesia’s health officials insist their protocols follow the World Health Organization’s guidelines with a system focusing on temperature checks at arrival gates and self-reporting. Most of Southeast Asia follows this approach, even as several studies indicate border screenings are not effective.

“I think airport scanning is more of a political measure than a practical measure. It might calm people down and demonstrate that the government is doing something, but as for public health, it’s not very useful,” says Coker, the emeritus public health professor.

These screenings must catch people in a very narrow window, between when they are well enough to travel, but sick enough to detect. Temperature scanners, fickle at the best of times, will also not find anyone whose fever may have subsided after a Tylenol on the plane. And just because someone doesn’t present clinical symptoms, doesn’t mean they aren’t sick. Asymptomatic patients still in the incubation phase have shed this coronavirus, according to doctors.

Two tourists who traveled through Indonesia before later testing positive have prompted alarm. A Chinese visitor who traveled to Bali from Wuhan was reportedly confirmed to have the virus on Feb. 4, after he left, while a man from Tokyo was hospitalized with the infection soon after returning to Japan on Feb. 19.

Indonesia’s health directorate general secretary, Achmad Yurianto, told local media he did not know the Japanese man’s name or where he visited. “So what can we investigate?”

The government also said that none of the 243 people who were evacuated from Wuhan on Feb. 2 showed signs of the virus while quarantined at a military hospital on an island northwest of Borneo.

But Dr. Putri Sundawa noted that the standard quarantine lasts 14 days, while the disease incubation period can stretch potentially as long as 24 days.

“If there were no complaints of pneumonia, they would not be checked,” she says.

Read more: ‘It Will Be Catastrophic.’ Asia’s Tourism-Dependent Economies Are Being Hit Hard by the Coronavirus

Relying on self-reporting once cases are introduced to the country creates further problems if patients and medical workers don’t know what to look for. An Indonesian woman with viral pneumonia was reportedly discharged because she had not been to China, while a nurse who cared for her had “no idea” the case could have been a coronavirus suspect.

It’s also hard to test for coronavirus without the right lab kits, which Indonesia lacked until February 5. The country’s health minister, a former military doctor who previously stoked controversy for urging a “brainwashing” treatment on stroke victims, determined that prayer had kept the virus away. His message to the public: “don’t be anxious.”

Myanmar, like Indonesia, has not reported a single case of coronavirus as of Friday. The restive country shares a 1,400-mile, porous border with China over which goods and people continue to flow.

Until donated testing kits arrived on Feb. 20, no domestic hospitals were able to confirm coronavirus cases. Previously, samples had to be shipped to Thailand or Hong Kong with results taking up to one week.

In a country with limited political freedoms and a kneejerk reaction to negative press, the government has kept a tight lid on coronavirus. Even government spokespeople said they did not have permission to comment on what preparations were being taken for an outbreak. Rather than empower the spread of information, the Health Ministry has reportedly proposed amending legislation to punish any healthcare workers who talk to the press or public about the virus with up to six months in jail or a $70 fine.

“Our greatest concern is the potential for the virus to spread to countries with weaker health systems,” Tedros Adhanom Ghebreyesus, WHO director general, said earlier this month.

With the exception of small and affluent Singapore, which experts have praised for its response to coronavirus, Southeast Asian governments spend little on health per capita by international standards. Even Indonesia, with a population of nearly 270 million spread over thousands of islands, faces discrepancies in health resources and suffers an overall shortage of facilities and personnel.

While admitting they may struggle amid an outbreak, Indonesian health officials insist they will contain the virus before it becomes one. But many health experts say it’s too late, as coronavirus will ultimately evade containment.

Coker, in Bangkok, says all countries should be preparing for a pandemic and implementing mitigation measures, like closing schools, preparing hospitals and redistributing medical staff as needed. Southeast Asian countries, he says, should assume they have cases.

The U.K.’s National Health Services has already seemingly made the leap. Anyone returning from Cambodia, Myanmar and Laos with symptoms, however mild, is advised to call the NHS hotline. Global risk analysis firm Verisk Maplecroft warns of “extreme risk” in Indonesia and Cambodia based on those countries’ ability to respond to a pandemic.

Yet even amid concerns about regional preparedness and possible equipment shortages, several Southeast Asian nations have been rushing to donate goggles, face masks and respirators to China. Laos, with a GDP comparable to Mali’s and Afghanistan’s, mustered $400,000 and $100,000-worth of supplies for the world’s second-largest economy after a national fundraising campaign.

Such political genuflection may have broad consequences. How nations across the world cope with coronavirus, and what they choose to prioritize, could resonate globally. And because of cross-border travel, migration and international tourism, Southeast Asia is highly interconnected with the rest of the world.

As countries everywhere grapple with or brace for coronavirus, the possibility of undetected cases spreading throughout the region underscores how the virus can no longer be assumed to stay confined to a handful of outbreak clusters.

“The significance of not recognizing the true breadth of the outbreak is that it continues to suggest to some that the travel bans and quarantines are effective tools in limiting global spread,” says virologist Christopher Mores at George Washington University’s Milken Institute School of Public Health.

“The sooner this outbreak is appreciated for the pandemic it has become, the better for a coordinated global response.” 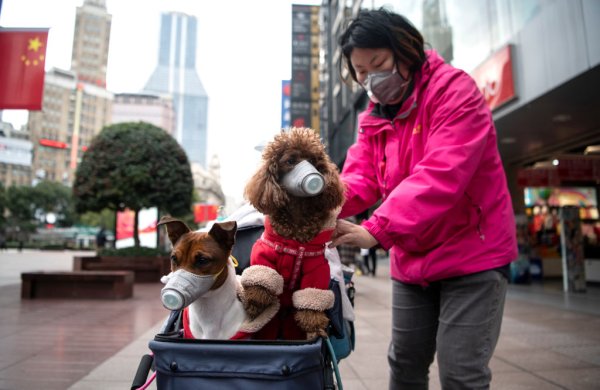 Pet Dog Tests Positive for ‘Low Level’ of Coronavirus
Next Up: Editor's Pick