A two weeks old boy is being mentored inside a Neonatal Intensive Care Unit's isolation room from an opioid withdrawal at the CAMC Women and Children's Hospital on June 28, 2019, in Charleston, WV.
Salwan Georges—The Washington Post/Getty Images
Ideas
By Kathy Strain
Kathy Strain, a resident of Berks County, Penn., is an advocate for grandparents raising grandchildren born with Neonatal Abstinence Syndrome or exposed to opioids while in the womb of the mother. She is part of the nationwide campaign called SOS: Stop Opioid Silence which seeks to help families deal with the impact of this nation's opioid epidemic.

Every 15 minutes, a child is born dependent on opioids — a condition known as neonatal abstinence syndrome (NAS). A baby born with NAS can have physical deformities and will almost certainly have developmental disabilities, which may not be obvious to a child’s guardian until that child does not walk, talk or achieve other important milestones. These children may also display learning disabilities and aggressive behaviors due to in-utero opioid exposure, and they’re also at a higher risk of drug addiction as adults.

The number of babies born with exposure or dependence on opioids is staggering. These births increased five-fold from 2004 to 2014. The number of children removed from their parents’ custody and placed in foster care or with relatives has also spiked.

The opioid manufacturers that fueled this ongoing epidemic, including OxyContin maker Purdue Pharma, will soon pay billions of dollars to settle the claims of parents, grandparents and guardians who either lost loved ones or care for children with NAS. It’s critical to direct most of these funds to victims, including innocent newborns. Unfortunately, if recent opioid and tobacco settlements are any indication, victims and their loved ones may never see a dime.

The Master Settlement Agreement of 1998 began a troubling pattern of state governments ignoring the needs of victims. Four tobacco companies settled lawsuits with 46 states. So far, the companies have paid $126 billion. But most states have mismanaged the money. A 2007 audit from the Government Accountability Office found that states used 23% of tobacco settlement funds to cover budget deficits. States spent just 30% of the money on health care initiatives of any kind, with tobacco control receiving a comparative pittance. And North Carolina brazenly spent 75% of its settlement money to bolster tobacco production, according to the American Lung Association.

Opioid settlement money has been mismanaged as well. Consider Oklahoma. When Purdue Pharma settled with the state in March for $270 million, Oklahoma’s attorney general earmarked $200 million for an addiction treatment center. Then state lawmakers stepped in. They immediately passed a law giving themselves the power to appropriate any future settlement money. Or consider West Virginia, where the legislature spent nearly $2 million of a 2004 Purdue Pharma settlement to build a 12,000-foot fitness center for the state police academy. After a federal settlement in 2007, the governor at the time wanted to use $3 million for a personal helicopter — a request that thankfully did not come to fruition.

Judges can and should ensure states don’t repeat the same mistakes with future settlement funds.

Opioid addiction has ravaged this country. From 1999 to 2017, nearly 400,000 Americans fatally overdosed on legally prescribed or illegal opioids. That’s roughly the number of Americans killed in all of World War II.

I personally live in the destruction caused by companies like Purdue every day. I have adult children in recovery who became addicted to opioids after taking prescription pain medication. I buried my child after he died from an opioid overdose. I am raising a grandchild because of the opioid epidemic.

Compensating victims and funding addiction treatment and recovery programs is the morally right thing to do and makes sense economically in the long term. If governments have carte blanche to spend the settlement as they see fit, that could leave victims without the help they need. And spending money now on treatment and prevention will avert far higher costs later.

In 2015, nearly one-third of children sent to foster care had parents suffering from substance use — a 10% increase from 2005. The federal government expects to spend $5 billion on foster care this fiscal year alone. In 2016, hospitals spent more than $570 million on newborns with NAS.

We’re just beginning to understand what resources these children will need to lead healthy lives.

Americans may not know the final financial burden of the crisis — but millions, like me, already know the personal burden too well. The best way to end this crisis is to ensure the settlement money goes to victims and their families. 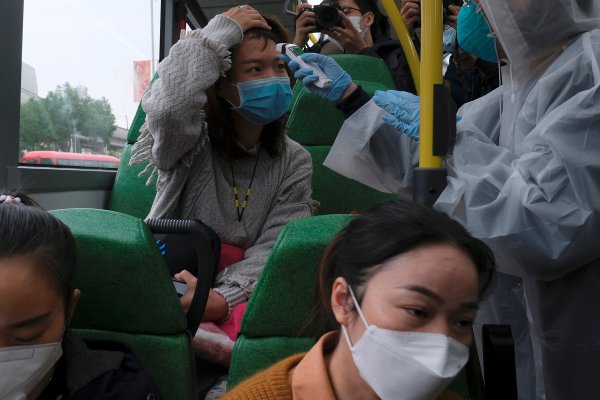 Early Detection Is Key to Combating the Spread of Coronavirus
Next Up: Editor's Pick