The Invisible Man Obscures Its Enemy, But Elisabeth Moss Is Unmissable

When it comes to falling apart, no actor is more together than Elisabeth Moss. In writer-director Leigh Whannell’s jaggedly effective psychological horror thriller The Invisible Man, Moss plays Cecilia, a woman who flees her abusive, controlling partner and lives in fear that he’ll find her—until she gets word that he’s died and left her a whopping inheritance. (He’s a tech billionaire and “optics” genius, and he’s played by Oliver Jackson-Cohen.) That’s when her problems really begin: Everywhere she goes—and especially when she’s at home at night—she feels Adrian’s eyes on her. His presence is like a menacing vapor. We feel it too, but still, we doubt her. When Moss, as Cecilia, looks into blank space and sees something, or someone, we can’t, her eyes are the ultimate unreliable narrator. Sometimes they gleam like shiny pinwheels, a hypnotist’s trick. Do we believe what they’re telling us, or is she really just nuts? Moss’ gift, on full display here, lies in making us want to side with her, when we know it would probably be smarter to flee. She earns our trust the hard way.

Moss is The Invisible Man’s skeleton key, the means to opening its every door. Whannell made his name, as both an actor and writer, with the 2004 Saw: He starred in the film, and co-wrote it with director James Wan. The Invisible Man is his third film as a director (the previous two were Insidious: Chapter 3, from 2015, and Upgrade, from 2018), and he’s fully clued in to the open secret of all great horror films: The scariest things are those that you don’t see. (The movie gently riffs on, but isn’t a remake of, James Whale’s 1933 version of H.G. Wells’ novel.) In one scene, Cecilia—who has found safety living with a close friend, police detective James (Aldis Hodge) and his teenage daughter Sydney (Storm Reid), whom she adores—lies sleeping, as the blanket covering her is slowly dragged off by an unseen force at the foot of the bed. Could you think of a simpler device?

Yet the moment is chilling, partly because the sight of—or the illusion of—someone looking at a sleeping woman is always chilling. Cecilia’s vulnerability is a kind of raw nakedness; she’s a woman with no place to hide. Yet when she tries to tell her friends, her sister (played by Harriet Dyer), and, eventually, the authorities that her vengeful ex has found a way to make himself invisible and is trying to destroy her, we can understand the doubt that clouds their faces, even though we’ve seen plenty of evidence that Cecilia is telling the truth. Maybe she is just imagining it all; the movie enlists us as part of the gaslighting scheme, particularly in its tricky final act.

But it’s also hard to watch Cecilia suffer, either emotionally or physically. There are several instances in which women are struck, hard, in The Invisible Man. When it happens to Cecilia, we hear the crack of a hand against her cheekbone, just before she reels off her feet. There’s some cruelty in this visual; there are moments when The Invisible Man is not fun to watch. But the movie’s violence opens up a larger question, keyed to the way the world reacts when a woman steps forward to call out abuse. What is it that makes us believe a woman’s story? If a woman is struck by an unseen hand, as Cecilia is, has it really happened? Where’s the proof? In The Invisible Man, it’s her word against his silence—and he doesn’t even have the guts to show his face.

The psychological violence in The Invisible Man is subtler but no less affecting, thanks to Moss. This isn’t the first time she’s been enlisted to play a woman who appears to be losing her grip: In Queen of Earth (2015) and Her Smell (2018), both directed by Alex Ross Perry, she plays characters in danger of falling off the edge of the world—it’s spinning too fast, and they can’t get a foothold. She’s also won an Emmy for her role as a resilient victim of ongoing trauma under a totalitarian regime in Hulu’s The Handmaid’s Tale. Moss is good at these roles, so good that she should probably take a break from them. But The Invisible Man is still an excellent vehicle for her; you can’t imagine the film without her. In the movie’s precise and artful opening scene, Cecilia enacts her elaborate escape from the house she and Adrian share, a minimalist gothic home-by-the-sea, like Silicon Valley’s version of a Daphne du Maurier mansion—it’s been Marie Kondo’ed of everything but its grim secrets. Wearing only socks and a nightie, she slips out of bed and locates a getaway bag she’s stashed in one of the house’s austere, control-freak closets. After hustling into some clothes and sneakers, she weaves through this hollow, cavernous prison of a house, making a stop at a mysterious combo laboratory-and-tech-space, where she disables an alarm. (Dog lovers should know that nothing bad happens to one of the film’s minor characters, Zeus, a sleek, handsome pussycat of a watchdog.) Eventually—and not without a few jump-scares—she makes her way to the nearest road, where she waits nervously for her sister to pick her up.

As a woman escaping what we can already see is a bad situation, Moss is all nerve endings, a neurotic ninja—this early scene is a marvel of wordless physicality. In The Invisible Man she, and we, can’t always see the enemy. But she’s in our view at all times. In the end, to see her is to believe her. 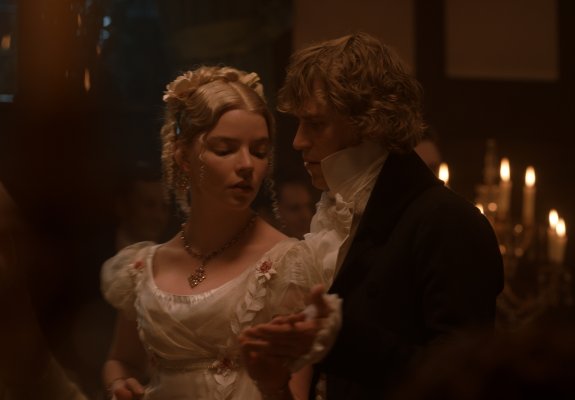 How the New Emma Movie Updates Its Main Love Story
Next Up: Editor's Pick