The S&P 500 tumbled 4.4% to close at the lowest levels of the day. It whipsawed investors earlier, turning lower late after California’s governor said the state was monitoring 8,400 people for signs of the virus after they traveled to Asia. The decline of more than 10% since last Friday has the benchmark on pace for its worse week since the 2008 global financial crisis and helped push the index into what is known as a correction. The MSCI All-Country World Index fell to the lowest since October, while the Stoxx Europe 600 also entered a correction.

“Stocks and bonds say we’re doomed,” said Chris Rupkey, chief financial economist for MUFG Union Bank. “Anyone who has a better idea for what lies ahead please let us know because right now the direction ahead for the economy is straight down.”

The outbreak has the potential to become a pandemic and is at a decisive stage, the head of the World Health Organization said Thursday. The global economy is on course for its weakest year since the financial crisis as the virus damages demand in China and beyond, Bank of America predicted. Earlier, Goldman Sachs slashed its outlook for U.S. companies’ profit growth to zero. Germany is examining potential stimulus measures to stem the economic impact. Saudi Arabia halted religious visits that draw millions.

Haven assets continued to be in demand, and the yen strengthened as yields on 10-year U.S. and Australian government bonds hit fresh record lows. Oil sank further. The pound reversed a gain after the U.K. told the European Union it could walk away from the negotiating table in June if progress isn’t being made toward a trade deal.

Investors are pricing in a Federal Reserve easing in April followed by another rate cut in July, swaps data show, while bets for easing from Japan to Australia have also increased after the International Monetary Fund cut global growth forecasts.

Losses continue to mount as investors weigh each gloomy headline on the virus. U.S. health authorities on Wednesday said they found the first case of the illness that does not have ties to a known outbreak. Microsoft Corp. joined an expanding list of companies warning over the impact of the virus on operations.

“The way the market is going down, it’s happening pretty quickly, but it’s very difficult to say that it’s over,” said Sameer Samana, senior global market strategist for Wells Fargo Investment Institute. “Bottoming is a multistep process and you’re probably still in step one.”

Earnings keep rolling in from companies including: Baidu Inc., Occidental Petroleum Corp. and Dell Technologies Inc. on Thursday after the close of U.S. trading, and London Stock Exchange Group Plc on Friday.Here are some key events still to come this week:

These are the major moves in markets:

— With assistance from Luke Kawa and Claire Ballentine. 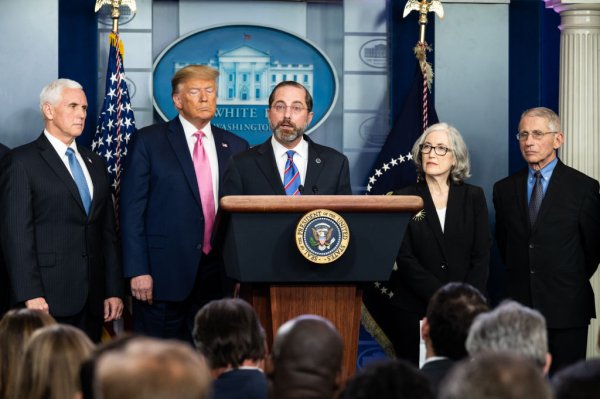 Meet the Official Heading the Coronavirus Task Force
Next Up: Editor's Pick