'More Than a Diversity Box to Be Checked.' Eve Lindley Is Poised to Become the Breakout Star of Dispatches From Elsewhere

Three of the four stars of AMC’s new drama Dispatches From Elsewhere need little introduction. André 3000 is hip-hop royalty. Sally Field is a two-time Oscar winner. Jason Segel, the show’s creator, has been a prominent voice in comedy over the last two decades.

Then there’s Eve Lindley. When the 27-year-old actor learned who would be joining her on set, she became terrified: “I had horrible visions in my head of everybody saying, ‘We hate this show, and now we hate Jason, and now we hate Sally too,’” she told TIME at a Brooklyn diner. “‘We’re gonna break all of our Outkast albums. How dare they support this sick, sick person?’”

Instead, the opposite seems to be happening. While the show itself—which premieres March 1 and follows four lonely people who get roped into a surreal adventure across Philadelphia—has received moderately positive reviews in advance of its debut, praise for Lindley has been unequivocal, with critics calling her “the breakout star of this series hands-down” (Den of Geek) and “absolutely incredible” (Philly Mag). Brian Tallerico, writing for RogerEbert.com, wrote that Lindley “steals pretty much every scene she’s in.”

The attention has come as something of a shock for Lindley, who was living on her friends’ couches just a few years ago. The nuance and depth of her Dispatches character Simone has made Lindley—whose initial anxiety about the show stemmed from a lifetime of facing bigotry for being trans, rethink the upper limits of her own career. And her unexpected star turn could be another breakthrough for the kinds of voices that are accepted within Hollywood.

A few days before the show’s premiere, Lindley arrives at MeMe’s Diner in Prospect Heights wearing a t-shirt with an elegant, angular design of two women. It turns out Lindley silkscreened the shirt herself: as a teenager, when she realized she was being shut out of roles she wanted to play, she turned to backstage endeavors like art and costuming to stay involved in the arts.

Lindley grew up bouncing around the tri-state area and began to transition from male to female in high school. While she says her parents were supportive, her school’s theater community was less so: they weren’t thrilled about casting her in female roles. When she fought for the role of Matron “Mama” Morton in Chicago, for instance, she was instead given the role of Mary Sunshine, a news reporter who is revealed to be a man at the end of the show.

“Everyone thought it was a good compromise, because I would be able to play a relatively female role, but then there’s this big reveal,” Lindley says. “Which was humiliating, of course, and not at all what I wanted to do. But you gotta take the parts that you can.”

Lindley enrolled in art school at the Fashion Institute of Technology but dropped out to work at a fabric painting studio, where she distressed and bedazzled costumes for Broadway shows like The Book of Mormon and Rock of Ages. She had stopped auditioning for roles—”I had completely given up,” she says—but still harbored big dreams from the wings.

“When Cinderella was on Broadway, we would be painting up in the dressing rooms—and I would think, ‘Maybe the girl playing Cinderella will not be able to go on and I’ll stand in for her,’” she says wistfully.

In 2013, Orange is the New Black arrived on Netflix with Laverne Cox playing the steely and charismatic Sophia Burset; the next year, Cox would become the first openly transgender person to be nominated for an Emmy in any acting category. Transparent and The Danish Girl would soon receive acclaim, albeit with cis men (Jeffrey Tambor and Eddie Redmayne, respectively) in trans roles, casting decisions that have been subject to criticism. Lindley was inspired by this wave of representation, and particularly by Cox, to throw her hat back in the ring. “She really burst the door open and we all owe her a lot,” Lindley says of Cox.

As Lindley hustled for the scant audition opportunities available to her, she took on odd jobs around the city: sales associate at Barney’s, barista, nanny, dog walker. She served subpoenas and handed out flyers. But she still wasn’t earning enough to afford her own rent. She didn’t have a place to call home when she was cast in her first major role in 2016, as a waitress in Katie Holmes’ directorial debut, All We Had.

“I was fully homeless and living on a person’s couch when I went to the red carpet, which is why I looked like total sh-t,” she says, laughing.

Eve Lindley and Katie Holmes at a 2016 screening of "All We Had" in New York City.
Getty Images—2016 Dave Kotinsky

While Lindley slowly began to receive work, including recurring roles in Outsiders and Mr. Robot, she was often disillusioned by the characters she was asked to play. Many times, it seemed like she was cast simply for being trans or queer, as opposed to her unique acting abilities; many more roles were defined by their pain and anguish. “I’ve played a lot of characters that get beat up a lot and are attacked and these awful things happen to them,” she says.

Lindley thought the best-case scenario of her career would be to play the “weird, funny-looking girl who shows up and says some funny stuff and leaves—like Anita in West Side Story, or any role Judy Greer has ever played.” So she was bowled over when she read the script of Dispatches From Elsewhere, which is inspired by a real-life alternate reality game that started in 2008, and came across the character of Simone, a witty and compassionate trans woman who plays Jason Segel’s love interest while embarking on her own winding personal journey.

“There’s a lot in this show that feels like it came right out of my brain,” she says. “I remember reading it and thinking, ‘I know her and I really feel like I am her.’ She’s able to exist in a story as more than a diversity box to be checked.”

Simone is not just a supporting character—she’s a genuine lead, with the show’s second episode even named after her. Lindley was especially moved by how the show’s writers handled the all-too-common attack scene—“This is the first character I’ve played who pulled out pepper spray and warded off their attackers”—as well as Simone’s attitude toward a pride parade, given Lindley’s own ambivalence toward them. A few years ago, Lindley was asked to appear on a float at the New York Pride Parade but backed out at the last second. “I’m so afraid of being blown up or shot—and nowadays, that is not even an irrational fear,” she says. “And more than just the fear is something else that queer and trans people deal with: Am I this person who throws glitter in the air, or the person who tucks my nephew in at night? How do we reconcile the unicorn in pasties with the family person?”

While Lindley loved her character, bringing her to fruition on set was another kind of challenge. “I would get there and there would be three powerhouses trying to navigate a scene,” she says. “I would have ideas but would sort of skirt around them.”

Eventually, it was Field in particular who helped encourage Lindley to assert herself amid veterans. “She really wanted me to trust my gut,” Lindley says. “And when Sally Field tells you to trust yourself, you kind of have no choice but to f-cking do it.”

Lindley began to be more assertive in shaping the character of Simone in small ways. “I wrote a list of things I felt like Jason maybe didn’t realize or needed to be refreshed on,” she says. For example, an earlier script depicted a montage of Simone’s childhood in which she was called Simon at various ages. That rang false to Lindley: “On a character level, Simone is a really creative girl—I don’t think she would simply add an ‘e’ to the name she already had,” Lindley says. “But also it would be powerful to call her 10-year-old Simone and 17-year-old Simone, because then what we’re saying indirectly is that she’s always been Simone.” Segel willingly made the change.

On the eve of the premiere, Lindley is back living in New York. She says her auditions have mostly returned to small parts, and that she plans to return to her day jobs soon. And beyond an uphill career battle, just existing in the world as a trans person in the Trump era has taken its own mental toll. Over the past few years, the Trump administration has rolled back many protections for transgender people—including in the military, federal prisons and school bathrooms. “It’s embarrassing to be American right now—to be trans and American,” she says. “I’m being told that I’m not worthy of defending the country.”

But while Lindley says she still carries fear with her every day, her role in Dispatches From Elsewhere has instilled in her a newfound optimism, and hopes that it can do the same for others. “It’s thrown me for a loop to see myself as a romantic lead. On some level, I didn’t find myself very lovable either,” she says. “Simone showed me how that is not the truth.” 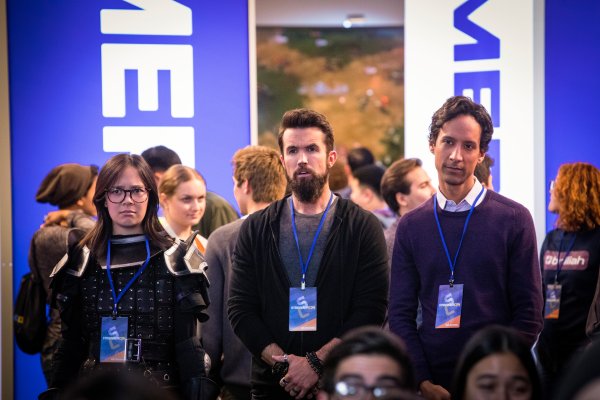