The Senate Sits on Commonsense Gun Reform While Americans Die

Flags fly at half mast over a prayer vigil at the University of Texas of the Permian Basin for the victims of a mass shooting in Odessa, TX, on Sept. 1, 2019.
Cengiz Yar—Getty Images
Ideas
By Shannon Watts
Watts is the founder of Moms Demand Action, which is the nation’s largest grassroots group fighting for stronger gun laws. Watts is a mom of five.

Then, because of America’s lax gun laws, they were all shot and killed during a mass shooting in West Texas that took a total of seven lives and wounded 22 more. All because the gunman exploited a loophole in our background check system that allows people like him, who are legally prohibited from buying guns, to avoid background checks by going to unlicensed sellers such as gun shows or online markets.

In retrospect, some may say that they were “in the wrong place and the wrong time,” but that’s not true. They were doing exactly what they were supposed to be doing that day, but they were in a country with the wrong gun laws.

This week marks the one year anniversary of the House of Representatives passing H.R. 8––a bill that would require background checks on all gun sales and close the very loophole that was exploited by the West Texas mass shooter. It was the first major gun safety legislation passed by either chamber of Congress in over two decades, and it did so with bipartisan support in Congress and overwhelming support from the American people. But instead of becoming law and saving lives, the bill has sat on Senate Majority Leader Mitch McConnell’s desk ever since because he’s refused to give it a vote in the Senate.

His inaction has come with a body count. Shootings like yesterday’s tragic shooting in Milwaukee seem to happen all too often, and while H.R. 8 has gathered dust on Senator McConnell’s desk, an estimated 38,000 or more Americans have been killed by guns and many more wounded. And the Odessa mass shooting isn’t only relevant to this bill because it’s an example of our gun crisis in America––tragically, it’s also relevant because the shooter that day purchased his murder weapon by exploiting the very loopholes that H.R. 8 would close.

In other words, if background checks were the law of the land, then the shooting may never have happened. Instead of ending in tragedy, those normal days in Texas would have simply remained normal.

So why, amidst so much death, has Senator McConnell refused to bring H.R. 8 to a vote? Because, for decades, he and the NRA have had a simple, unspoken deal: he blocks gun safety legislation, and in turn, the NRA works to keep him in power.

This deal has earned McConnell consistent “A” ratings from the NRA and more than $1.2 million in campaign support, and you can trace it through the past 30 years of tragedies in America. After McConnell’s hometown suffered the deadliest mass shooting in the history of Kentucky in 1989, McConnell failed to comment on gun safety legislation because, according to his spokesman, he “lost his voice that day.” After 20 children and six educators were killed at Sandy Hook School in 2012, McConnell campaigned on blocking background check legislation. After 59 people were killed and hundreds more wounded in Las Vegas in 2017, McConnell said he “think[s] it’s premature to be discussing legislative solutions, if there are any.” And after the West Texas mass shooting last year, McConnell still refused to act.

Unlike Senator McConnell, Americans from across the political spectrum support the common-sense background checks policy in H.R. 8––including 93 percent of all American voters, 89 percent of Republicans, and 87 percent of gun owners. But under Mitch McConnell, we do not have gun laws written for the people and by the people, but by the gun lobby and for the gun lobby. The result is a country where, anytime and anywhere, in a matter of moments, a normal day can become your last––just like it was for those 7 people in West Texas last year.

Fortunately, in this November’s coming election, gun sense voters have a chance to stand up and send a message that enough is enough. Elected officials like Senator McConnell work for us, not the gun lobby, and it’s time to demand more than their thoughts and prayers.

I know that when I go to the ballot box, I’ll be thinking of those people who died in the West Texas mass shooting last year, I’ll be thinking of the estimated 38,000 Americans killed by guns while H.R. 8 has sat on Senator McConnell’s desk, and––with them in mind––I’ll be voting for a gun sense majority. Because Senator McConnell might control votes in the Senate, but he does not control American voters. 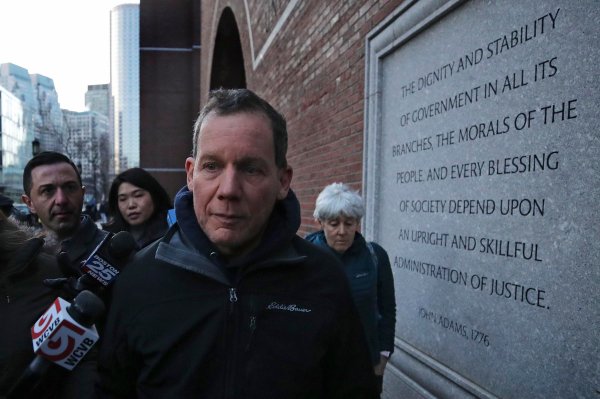 We Need to Defend America's Research and Science From Foreign Spying
Next Up: Editor's Pick