A Wrongfully Convicted Kansas Man Who Spent 23 Years in Prison Is Awarded $1.5 Million

FILE - In this Feb. 14, 2018 file photo, Lamonte McIntyre, convicted of a 1994 double homicide in Kansas City, Kan., sits before the Senate Judiciary Committee in Topika Kan. McIntyre, who spent 23 years in prison for a double murder he did not commit was granted more than $1.5 million in compensation under the state's mistaken-conviction statute.
AP
By Josiah Bates

A Kansas man who spent over two decades in prison for a double murder he didn’t commit will be awarded $1.5 million for his wrongful conviction, according to the Kansas State Attorney General’s office.

Lamonte McIntyre was convicted and sentenced to two terms of life in prison for the murders of Donald Ewing and Doniel Quinn back in 1994. The two victims had been shot in the middle of the day while they sat in their car. Mclntyre was 17 at the time and there was no physical evidence or motive that linked him to the crime.

According to the Associated Press, documents made public during the 8-year fight to free McIntyre allege that the prosecutor in the case intimidated witnesses who told her that McIntyre did not look like the shooter after they saw him in person. There are also allegations that the detective who investigated the murders would prey on and harass African-American women, including McIntyre’s mother, the AP reported. The outlet further reports that the presiding judge and the prosecutor in the case had a previous romantic relationship that was not disclosed at the time.

McIntyre was released from prison in 2017 after serving 23 years on the wrongful conviction.

“Today, Lamonte McIntyre has been declared, finally and conclusively, a completely innocent man. That long-overdue recognition, along with the statutory payment and other benefits, will help lighten a bit the heavy load he has carried,” Cheryl Pilate, McIntyre’s attorney, said in a statement sent to TIME. “Lamonte is grateful for the benefits of the compensation statute, but he knows his fight for justice is far from over.”

In 2019, McIntyre filed a lawsuit against the state of Kansas under their “Compensation for Wrongful Conviction and Imprisonment” statute, which allows those who have been wrongfully convicted to seek compensation from the state. On Monday, he was awarded more than $1.5 million.

“We are committed to faithfully administering the state’s mistaken-conviction law as the legislature wrote it,” Kansas Attorney General Derek Schmidt said in a press release Monday after the suit was resolved. “We were ultimately able to resolve all issues, satisfy all of the statute’s requirements, and agree to this outcome so Mr. McIntyre can receive the benefits to which he is entitled by law because of his mistaken conviction.”

Along with the funds, McIntyre will also have access to state health care benefits for two years and will receive a tuition waiver if he decides to attend postsecondary school. McIntyre is also the co-founder of the Miracle of Innocence, an organization that helps others who have been wrongfully convicted.

In an interview conducted last year, McIntrye said he doesn’t have any more time to be angry.

“It took too much time from me. That’s just too big of a price to pay. I’d rather just live life,” McIntyre told ABC affiliate KMBC. “I don’t have no more time to give something like anger. I don’t have time for it.” 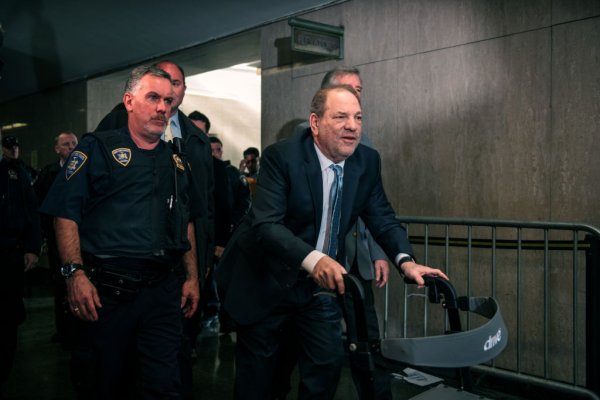 Harvey Weinstein Rerouted to Hospital After Guilty Verdict
Next Up: Editor's Pick