Coronavirus Could Cost World $1 Trillion If It Becomes a Pandemic, Analysts Predict

The ghastly prospect that the coronavirus outbreak could become the first truly disruptive pandemic of the globalization era is renewing doubts over the stability of the world economy.

With the death toll approaching 3,000, over 80,000 cases officially recorded and an outbreak in Italy now shutting down the richest chunk of its economy, some economists are beginning to war game what an untethered outbreak could mean for global growth.

Those at Oxford Economics reckon an international health crisis could be enough to wipe more than $1 trillion from global gross domestic product. That would be the economic price tag for a spike in workplace absenteeism, lower productivity, sliding travel, disrupted supply chains and reduced trade and investment.

Investors are already nervous, with U.S. stock benchmarks slumping more than 3% on Monday and the S&P 500 Index dropping the most since February 2018.

For now, central bankers and governments continue to bet that the coronavirus will not damage the world economy by much, and perhaps allow it to enjoy a rapid rebound once the illness fades. But that confidence is being tested.

While the International Monetary Fund currently reckons the virus will only force it to knock 0.1 percentage point off its 3.3% global growth forecast for 2020, IMF Chief Economist Gita Gopinath said in a Yahoo Finance interview that a pandemic declaration would risk “really downside, dire scenarios.”

The head of the World Health Organization called the new cases “deeply concerning,” but said the outbreak isn’t yet a pandemic.

Still, the protracted shutdown of Chinese factories that were supposed to be back online and the spread of the virus to South Korea, Iran and Italy’s northern industrial heartland raise the specter of much greater death and disruption. The virus risks tipping Italy into a recession that could hurt the rest of Europe too.

South Korea’s economy is being buffered, with consumer confidence plunging the most in five years.

UBS Group AG Chairman Axel Weber is already far more pessimistic than the IMF and warned global growth will experience a massive drop from 3.5% to 0.5% and China will shrink in the first quarter.

“The much larger downside risk is that this continues to be a problem,” the former Bundesbank president told Bloomberg Television in Riyadh, where Group of 20 finance chiefs hinted at collective worries at the dangers of the virus.

How to assess the risk is complicated by doubt over how far the coronavirus will travel.

In an analysis that predates the current outbreak, the World Bank reckons a destructive pandemic could result in millions of deaths, and points to how even conservative estimates suggest such an experience might destroy as much as 1% of global GDP. A disastrous health crisis akin to the 1918 Spanish flu, which may have killed as many as 50 million people, could cost 5% of global GDP, the Washington-based lender said in a 2015 report.

A March 2016 paper co-authored by former U.S. Treasury Secretary Lawrence Summers likened the annual financial impact of a pandemic flu to the long-term yearly cost of global warming. It calculated that if pandemic deaths were to exceed 700,000 per year, the combined cost to the world economy of premature lives lost and illness, along with lost income, would total 0.7% of global income.

Oxford Economics’s tally of the impact from a global pandemic stemming from the current outbreak suggests a cost of $1.1 trillion to global GDP, with both the U.S. and euro zone economies suffering recessions in the first half of 2020. It describes such a scenario as a “short but very sharp shock on the world economy.”

Aside from containment of the disease, one mitigating factor — and a major unknown for economists modeling the outcome — will be the actions of central banks and governments to cushion the effects. Yet for Drew Matus, chief market strategist at MetLife Investment Management, monetary policy alone would probably be insufficient.

“My guess would be you actually can’t solve it with interest rates,” he told Bloomberg Television. “People are worried about their families, worried about their health — 25 basis points doesn’t do it, in terms of encouraging people to go out there and spend.”

–With assistance from Francine Lacqua, Tom Keene and Joanna Ossinger. 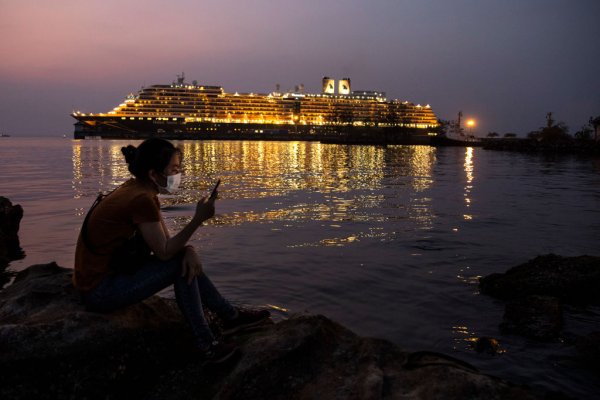 A U.S. Woman Who Traveled on the Westerdam Cruise Ship Does Not Have Coronavirus After All, CDC Says
Next Up: Editor's Pick