Joyce Ladner Used Her Stories to Raise Awareness of the Civil Rights Movement. Now, She’s Telling Them in a New Way

When The March, TIME’s virtual reality re-creation of the 1963 March on Washington for Jobs and Freedom, opens to the public on Friday at Chicago’s DuSable Museum of African American History, visitors will be able to experience being part of the crowd on the day in 1963 when Martin Luther King Jr. delivered his “I Have a Dream” speech.

For Joyce Ladner, summoning that feeling requires no VR headset.

Ladner was a teenage college student when, on Aug. 28, 1963, she ended up right behind King during that famous speech. And her memories of that day — as well as what came before and after — will be part of the exhibit at the DuSable, too. Near the virtual reality experience, visitors will be able to ask questions of a voice-activated, pre-recorded video interview with Ladner, and receive answers in real time, thanks to artificial intelligence: it’s like talking to Siri or other voice-activated devices, except the answers come from a real person, speaking about real history. The video shoot was produced by StoryFile, a multimedia company best known for using an earlier version of this technology to preserve the testimony of Holocaust survivors.

Ladner’s interview, which covers 343 questions that were asked over the course of three days, is the first StoryFile has produced with a civil rights activist.

“Looking back is a lot easier than it was [then] for me to look forward,” Ladner, now 76, tells TIME.

When Ladner was growing up, her great uncle, a veteran of World War I, would tell her and the other younger members of the family to “be the Jackie Robinsons” of their day. But it was the 1955 lynching of 14-year-old Emmett Till that the Mississippi native says truly inspired her political awakening.

“People are going to ask me if I was afraid fighting for civil rights in Mississippi, and yes, there’s always fear involved, but you cannot allow fear to immobilize you,” she says. “Courage isn’t the absence of fear, but the ability to prevail in spite of it.”

By the summer of 1963, Ladner was 19 and a member of the Student Nonviolent Coordinating Committee (SNCC) who had decided to spend six weeks in New York City to help plan the upcoming March on Washington. She gave speeches in the New York area about what life was like in the South, in order to raise money to charter buses to the event at the Lincoln Memorial; a highlight was receiving a $500 check (worth more than $4,200 today) from a woman who lived in Manhattan on Park Avenue.

“You had to tell stories about people who were killed,” she says, noting that NAACP leader Medgar Evers was assassinated that summer too. “People always want to hear stories about personal experiences if you’re trying to recruit them to a cause, and there was not a lot of coverage of the day-to-day activities of trying to get black people registered to vote.” She cites the literacy tests that black people had to take in order to vote, which set them up to fail by asking questions like “How many grains of sand are on a beach?” and “How many bubbles are in a bar of soap?” — Ladner herself failed this test three times while she was in college.

So she was especially moved by the hundreds of thousands who attended the March on Washington to express their outrage at these injustices too. She got to stand on stage behind Martin Luther King Jr. because she had worked with Bayard Rustin’s organizing team in Manhattan. What she remembers the most are John Lewis’ speech calling for more protections for activists in the South and the “overwhelming” size of the crowd. “I never imagined so many people would turn up,” she says.

“Most people today don’t know why the March occurred; they only know about Dr. King’s speech, but they don’t know it was organized for jobs and freedom. The ‘dream’ would come as a result of a lot of loss of life, of harassment, people losing jobs over trying to register to vote, losing their homes that were torched. Jobs were a critical part of why we were marching, and the freedom to have a decent life, to be free from these horrendous conditions in the South,” she tells TIME. “Many issues were never resolved at all, and now we see a resurgence of some of the issues that we fought against, like [challenges to] voting rights. I never imagined we would have to keep fighting to justify the existence of the Voting Rights Act of 1965.”

She saw participating in the StoryFile interview as a way to preserve the real reason people attended the March on Washington and to reach students in an engaging way. “I’m an educator,” she says. “When I go out to give speeches, most young people have never met someone who was in the civil rights movement. We’re like relics of a bygone era. They can relate more to an event through [talking to and seeing] a person rather than just reading the history in a book.”

Indeed, StoryFile interactives are meant to “create an opportunity for ordinary people to tell remarkable stories,” says Stephen D. Smith, the company’s founder and owner. They’re a way for people to “come closer to history and closer to the people who have made the world in which they live in.”

What struck Smith about Ladner’s story was that history-making moments don’t always feel history-making when you’re in the thick of it, as exemplified by Ladner’s memory that, while the “I Have a Dream” speech was actually happening, she was mostly thinking about getting back to college in Jackson, Miss. “It’s a great insight into how history happens,” Smith says. “It’s not all it might appear when you’re in the middle of it.”

But even at 19, Ladner knew that the dream that King expressed was “not a dream that we felt was going to be realized anytime soon” — that she would have to keep working, and so would others. Ladner went on to get a PhD in sociology, becoming a college professor and at one point acting president of Howard University. She was also appointed by Bill Clinton to oversee the District of Columbia Financial Control Board as it restructured the city’s public school system; she still lives in Washington, D.C. And she hopes that young people who “talk” to her at the DuSable Museum will come away from the conversation inspired to become more civically engaged themselves.

“I hope the younger students understand they can do something about conditions they don’t think should exist,” she says. “There’s an activist in all of us if you tap into it.” 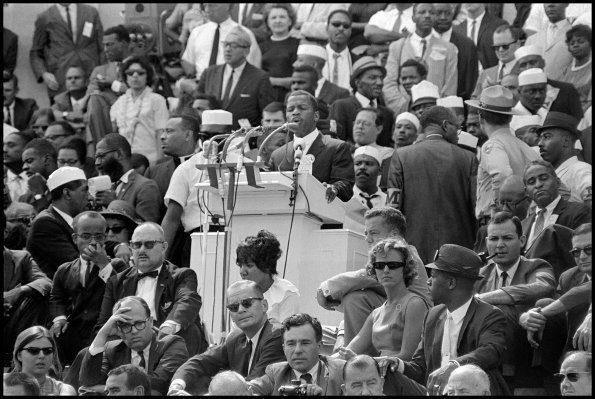 'We Have to Redeem the Soul of America.' John Lewis on What’s Changed and What Hasn’t Since the March on Washington
Next Up: Editor's Pick