Judging from this past weekend, things don’t seem to be going that well for Shia LaBeouf. While in Berlin for the premiere of his new movie Nymphomaniac: Volume 1, LaBeouf appeared wearing a paper bag on his head after walking out of a press conference in which he answered only a single question.

According to The Hollywood Reporter, LaBeouf walked the red carpet at the premiere of Lars Von Trier’s new movie with a brown paper bag on his head, with what appears to be his latest mantra scribbled across the front: “I’m not famous anymore.”

That was shortly after LaBeouf appeared at the conference with Nymphomaniac‘s other stars Christian Slater, Stacy Martin, Stellan Skarsgard and Uma Thurman. A few minutes into the panel, a reporter asked LaBeouf about the film’s many sex scenes.

“When the seagulls follow the trawler, it’s because they think sardines will be thrown into the sea,” answered LeBeouf, bizarrely quoting French soccer player Eric Cantona from a press conference that took place almost 20 years ago, before standing up and abruptly walking out as the other actors sat there, stunned. After a quick joke by Slater—”Obviously, the script is packed with a lot of sardines”—the press conference continued as usual.

LaBeouf, who has recently been criticized for borrowing heavily from other artists for his own films, has also taken to tweeting both his apologies and some grand statements. 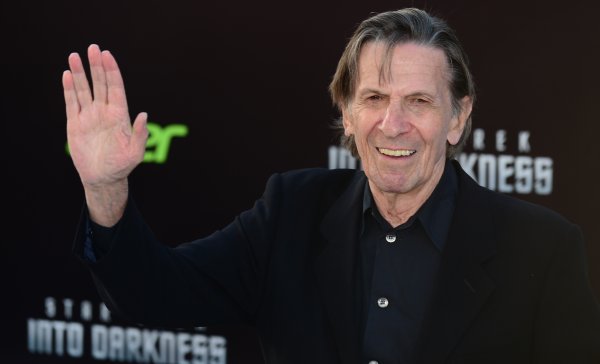