President Trump's Gifts From Other Nations Include Golf Clubs, Portraits of Himself: Report

(Bloomberg) — What kind of gift would impress President Donald Trump? For Vietnam Prime Minister Nguyen Xuan Phuc, the answer was: a gold-framed portrait of Donald Trump.

The State Department on Monday published a list of gifts that foreign governments gave to Trump and other U.S. officials in 2018. The report offers a snapshot of how Trump’s peers curry his favor and a sometimes amusing account of how the U.S. government responds.

France’s Emmanuel Macron gave Trump a Louis Vuitton golf bag and some photographs valued together at $8,275. The mayor of Davos, Switzerland, gave him a hickory golf putter ($450). The portrait from Vietnam was valued at $3,100. Trump and First Lady Melania Trump transferred everything they received to the National Archives, in keeping with U.S. law.

The government treats some gifts less kindly. The Secret Service destroyed a clock that the Crown Prince of Bahrain gave to Vice President Mike Pence, possibly out of concern it might be a secret surveillance device. Several watches given to CIA agents will meet the same fate.

Trump’s daughter and son-in-law, Ivanka Trump and Jared Kushner, purchased bracelets worth $3,185 from the Queen of Jordan in order to keep them. It was the only gift Ivanka Trump received, according to the report, while Kushner transferred two other items to the archives.

A White House spokeswoman referred a request for comment to the State Department, which didn’t immediately respond.

The clock Pence had to forfeit was given to him by the Crown Prince of Bahrain, Salman Al Khalifa, in November of 2017, according to the report. The clock was produced by William & Son of London, stylized with the flag of Bahrain and valued at $5,730.

“Disposition – Destroyed per USSS Policy,” the report says, without elaborating. A total of nine watches, including luxury brands like Rado and Omega, given to six unidentified CIA agents are also slated for destruction, it said.

The Secret Service didn’t immediately respond to a request for comment.

Trump is adding to the haul this week during a visit to India. On Monday, he was given a framed picture of himself and the first lady at the Taj Mahal. 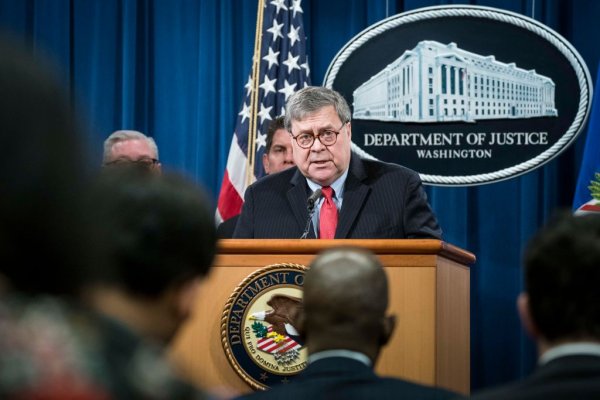 1,100 Former DOJ Officials Call for Attorney General to Resign
Next Up: Editor's Pick