Malaysian Prime Minister Mahathir Mohamad abruptly submitted his resignation to the king on Monday and his party exited the ruling coalition, throwing the Southeast Asian nation into fresh turmoil after infighting over his successor came to a head.

The statement from his office contained no other details. His party, Bersatu, said it would continue to support Mahathir as prime minister. Another group of lawmakers in the party of Anwar Ibrahim, who was in line to succeed Mahathir, said it was forming an independent bloc of 11 lawmakers.

It was unclear whether Mahathir would form a new coalition, whether Anwar’s camp would lead the government, or whether a new election would take place. Anwar was set to meet the king at 2 p.m., while other parties were holding press briefings.

Long-time rivals Mahathir and Anwar joined hands ahead of elections in 2018 for a stunning victory that ousted the previous coalition, which had ruled Malaysia for six decades. It sought to usher in a new era of transparency and good governance, and it focused efforts on prosecuting former Prime Minister Najib Razak for corruption in the use of state funds.

Despite Mahathir’s pledges to hand power to Anwar, the 94-year-old premier has repeatedly said he’ll step down only after resolving problems inherited by the previous administration. Anwar said they had an “understanding” it should take place around May this year.

On Sunday, Anwar confirmed that some members of his own party were working with Mahathir’s camp to form a new government, and they had met with the country’s king on Sunday. While the monarchy’s role in Malaysia is largely ceremonial, the king retains some discretionary powers and political leaders typically meet the ruler before announcing major political changes.

The drama on Monday was reminiscent of the 1990s, when Anwar was ousted from Mahathir’s cabinet and arrested for sodomy. Anwar met Mahathir earlier on Monday, and called it a “very good meeting.”

“Suffice that we are clear so far,” Anwar told reporters before joining a meeting of his People’s Justice Party. “It was a very good meeting and I am touched by his attitude and stance to not bow down to a group that wants to usurp power without setting an agenda of change.”

To form a new government, Mahathir would need to work with the United Malays National Organisation, or UMNO, the party he once led before defecting, as well as the Pan-Malaysian Islamic Party, or PAS, because he wouldn’t have enough parliamentary seats to retain power without them. He must have the support from 112 out of 222 members of parliament.

The political intrigue could bring fresh tumult to Malaysia, and deter investors looking for stability at a time when the global coronavirus epidemic and trade wars are hurting growth. Malaysia’s benchmark stock index has already dropped more than 20% from its peak in 2018, and is set to enter a bear market for the first time in 12 years.

The Malaysian ringgit slumped to the lowest in almost six months amid the political turmoil, trading 0.8% down at 4.2242 per dollar as of 3:02 pm local time.

–With assistance from Yantoultra Ngui. 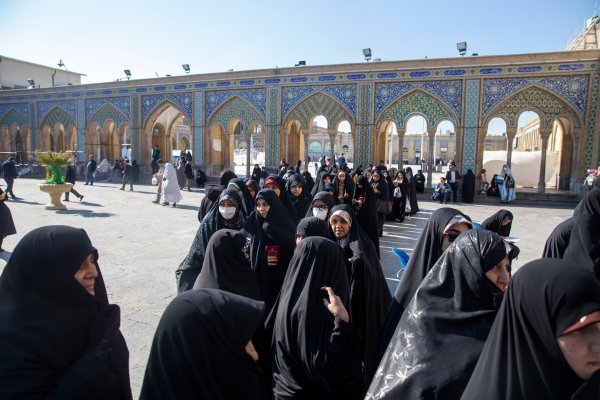 Hardliners' Victory in Iran Elections Sets Back Relations With West
Next Up: Editor's Pick