On Friday, Twitter began suspending 70 pro-Bloomberg accounts for violating a company policy put in place in response to the 2016 election, according to the Los Angeles Times.

In a statement to TIME, Twitter confirmed that it has “taken enforcement action on a group of accounts for violating our rules against platform manipulation and spam.” Some accounts will be permanently suspended and others will have to go through steps to verify their owners.

The suspended accounts, first reported on by the Times, usually used identical language and images in each tweet and many only began a few months. When the Times asked Twitter about the accounts, Twitter determined that they violated their “Platform Manipulation and Spam Policy.”

The tech giant’s rules state that “You can’t artificially amplify or disrupt conversations through the use of multiple accounts.” This includes creating multiple accounts to post the same content, and “coordinating with or compensating others to engage in artificial engagement or amplification, even if the people involved use only one account.” Twitter put the rules in place in 2019 in response to efforts by Russian accounts to influence American voters during the 2016 election.

The Bloomberg campaign has launched an extensive digital push for the former New York City mayor, who officially joined the presidential race in November. The campaign has hired hundreds of “deputy digital organizers” to promote Bloomberg to their contacts and on social media, according to the Wall Street Journal. These staffers reportedly make $2,500 a month. Some organizers use the app Outvote, an app that allows users to share content within their network and send pre-written text.

In a statement to TIME, Senior National Spokesperson for the Bloomberg campaign Sabrina Singh said, “We ask that all of our deputy field organizers identify themselves as working on behalf of the Mike Bloomberg 2020 campaign on their social media accounts. Through Outvote content is shared by staffers and volunteers to their network of friends and family and was not intended to mislead anyone.”

While these “deputy digital organizers” could be the owners of some of the suspended accounts, the Times reports that some accounts could belong to unpaid Bloomberg volunteers or supporters. 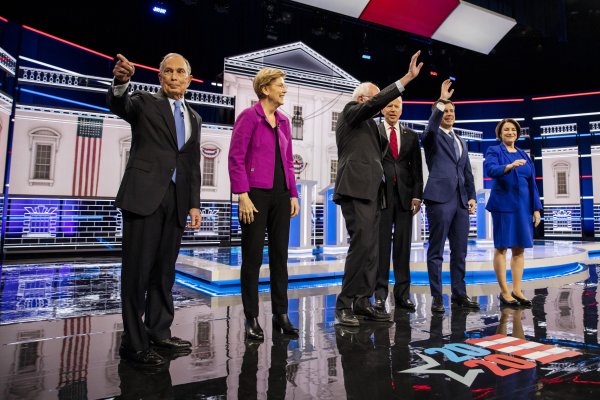 Beyond the Shouting: These 10 Questions Show Who You Think Won the Nevada Debate
Next Up: Editor's Pick