Officials in protective suits check the temperature of Diamond Princess cruise passengers before they board at a port in Yokohama, Japan, on Feb. 21, 2020.
Eugene Hoshiko—AP
By Isabel Reynolds and Dandan Li / Bloomberg

Prime Minister Shinzo Abe has so far managed to keep the coronavirus outbreak from damaging his hard-won relationship with China. That’s getting even more difficult with each new case confirmed in Japan.

Abe has taken a softer approach to China over the virus than the Trump administration, winning Tokyo praise in Beijing. That chimes with his efforts to nurse Japan’s relationship with its giant neighbor and biggest trading partner back to health since he took office in 2012 amid the worst crisis in decades.

Unlike others including the U.S., Australia and Singapore, Abe’s government has avoided a blanket ban on visitors from its neighbor, instead restricting entry from just two provinces. While acting quickly to evacuate its citizens from the virus epicenter of Hubei, Japan also used the planes to fly in aid packages for China.

That’s contrasted with Japan’s counterparts in the U.S., who have questioned China’s commitment to transparency during the crisis — leading to bickering between the two sides. China is also keen to keep ties strong with Abe amid a painful trade war with the U.S. that has battered its economy.

“Japan’s attitude has been very helpful for China,“ said Noriyuki Kawamura, a professor at Nagoya University of Foreign Studies. “China’s initial response to the virus was insufficient. The question is what Japan will do when those problems are exposed. Will it criticize China or close its eyes?”

China has shown its appreciation for Japan’s approach, marking an unusual interlude in a relationship between Asia’s two biggest economies long rocked by disagreements over history and territory. Personal touches like a fragment of ancient Chinese poetry attached to aid packages from a Japanese group and a video of a Tokyo-based ballet troupe singing the Chinese national anthem won widespread praise on Chinese social media.

But as coronavirus infections rise in Japan, Abe is likely to find his position harder to maintain, especially given that an earlier alert from China could have slowed the spread of the disease. Before global warning flags were raised, thousands of Chinese tourists visited all parts of Japan and have since been linked to cases of virus transmission. Three people have so far died of the infection in Japan.

Chinese visitors to Japan in January rose 22.6% from a year ago, data released Wednesday showed. Even though infection numbers in China grew dramatically in late January, Abe’s government only banned entry from Hubei province on Feb 1.

While the virus outbreak initially provided an opportunity for Japan to show solidarity, it’s likely to interfere with Abe’s plans for a state visit by President Xi Jinping, meant to crown the seven-year slog to restore relations. Japanese officials have repeatedly said there’s no change to the plan to treat Xi with full state honors “when the cherry trees bloom” in early April, but both sides may find the trip harder to manage.

The virus also appears to be eating away Abe’s long-solid voter support. A poll published this week by the conservative Yomiuri newspaper, which generally backs Abe, showed 52% of respondents were dissatisfied with the way the government has been handling the outbreak. His support rate dropped in all three media surveys published Monday.

The opposition Democratic Party for the People has called for a ban on all foreigners visiting from China. Former premier Yukio Hatoyama’s Twitter announcement that an organization he heads had donated a million masks to China was met with a barrage of online criticism amid a serious shortage of such items in Japan.

Some in Abe’s own ruling Liberal Democratic Party oppose Xi’s state visit, partly because of the ongoing incursions by Chinese ships into what Japan sees as its territorial waters around disputed East China Sea islands.

An annual poll by think tank Genron NPO published in October found 46% of Chinese had a favorable impression of Japan, the highest since the survey began in 2005, as more tourists experience the country for themselves. Nearly 10 million Chinese visited Japan last year.

Almost 85% of Japanese respondents to the same poll said they had an unfavorable impression of China. By contrast, Chinese Ministry of Foreign Affairs spokeswoman Hua Chunying said gratitude would bring the two peoples together.

“Since the outbreak of the epidemic, the Japanese government and people have expressed sympathy, understanding and support to us,” she told reporters Feb. 4. “What the virus has done is cruel and will not last. What the people have done is touching and will be remembered forever.”

She later tweeted in Japanese about China sending testing kits to its neighbor, saying “there are no borders in the fight against the virus.”

Skeptics point out that there are still deep divisions between the neighbors, including over Japanese citizens detained in China and restrictions on Muslims in the western region of Xinjiang. The territorial dispute over East China Sea islands that brought them close to a military clash in 2012-13 is no nearer resolution.

“Neither side has reduced its number of patrols close to the islands,” said Tsai Hsi-hsun, director of Tamkang University’s Graduate Institute of Japanese Political and Economic Studies in Taiwan. “They still don’t trust each other in terms of national security and that distrust is deeply ingrained on both sides even though, on the surface, the relationship looks better.” 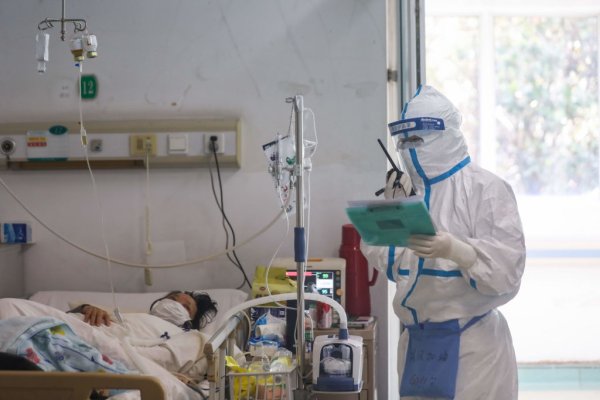 Hospitals in China Turn Away Other Patients Amid Coronavirus Outbreak
Next Up: Editor's Pick