This Sunday marks the 75th anniversary of what is arguably the most famous news photo of all time. The shot of U.S. Marines raising an American flag on the Japanese island of Iwo Jima, captured by Associated Press photographer Joe Rosenthal, has become a timeless symbol of valor and unity.

Despite the photo’s renown, however, it has been dogged by a controversy over its authenticity. Shortly after the image appeared, some of Rosenthal’s rivals whispered that he had staged it. It was an ugly rumor, for it painted Rosenthal as a charlatan and his photo—which was published on the front page of countless American newspapers, as well as in the pages of that week’s issue of TIME—as nothing more than a hoax.

Rosenthal himself had inadvertently fueled the suspicions, as he later recounted, but, a Marine videographer who stood alongside him as the flag went up captured footage that shows the flag-raising in real time. Although accusations that the photo was posed have persisted over the years, those claims are baseless.

In another way, however, the Pulitzer Prize-winning picture was misleading.

Rosenthal’s photo represented the climax of a long series of triumphant flag-raising images in American news coverage of the Pacific theater of World War II. At first, these images raised the home front’s hopes for a relatively speedy end to the war. But, not long after Rosenthal’s famous photo appeared—roughly six months before the war in the Pacific would actually end—there were signs that such images were no longer having that effect. In fact, the government would soon be forced to correct the false impression that the visual coverage of the battles in the Pacific had conveyed.

By 1944, American forces had driven the Japanese from several islands, and news reports from the theater had developed a predictable sequence. First, there would be images of preparations for the invasion (warplanes dropping bombs, ships approaching the island). Then, newspapers would publish photos of troops fighting their way past the beaches. Finally, the American triumph would be signaled by a photo of Old Glory raised in victory.

Such flag-raising images routinely appeared in newspaper coverage of island battles such as Tarawa, Guam and Leyte. The newsreels that millions of American moviegoers watched each week also used footage of flag-raisings to punctuate their reports (for example, those depicting the U.S. capture of Peleliu and Kwajalein). The expectation of a triumphant flag planting was so well-ingrained by February 1945 that Dorman Smith’s syndicated editorial cartoon, appearing in newspapers across the country just a few days before Rosenthal’s photograph, depicted a pair of hands jamming an American flag into a rock labeled “Iwo Jima.”

This was a home front, in other words, that was quite used to images of flag-raisings. One might even say that the American people, rather than being shocked by Rosenthal’s image (as many writers have suggested), actually anticipated it.

But the invasion of Iwo Jima had a special meaning for the American public. It was the first soil in the island-hopping campaign that was technically part of Japan. Although it was 700 miles from Tokyo and its small civilian population had been evacuated earlier in the war, the rocky island was administered as part of the Tokyo prefecture. This circumstance encouraged the press to say that the assault on Iwo Jima represented the beginning of the “battle of Japan”—the final battle of the war in the Pacific, the name implied.

All of these factors contributed to the rapturous reception that greeted Rosenthal’s photograph—the first flag-raising, as far as the home front was concerned, on Japanese soil. No wonder, then, that the photo appeared so widely and so prominently. It was hailed by military leaders and members of Congress. The Treasury Department quickly adapted the image to serve as the symbol for a massive war-bond campaign. The final victory over Japan must have seemed to be closer than ever.

However, the Battle of Iwo Jima itself was not even over. It raged on for another month after the flag-raising, through late March, and three of the men in Rosenthal’s photo died in the fighting (as did the Marine who shot the video of the flag-raising). Then came the dispiriting Battle of Okinawa, which lasted nearly three months and was one of the bloodiest of the Pacific war—and all of that was just a prelude to the anticipated invasion of Japan’s main home islands, which promised to be far longer and deadlier.

The home front’s hopeful expectations, raised so triumphantly (but also misleadingly) by the Iwo Jima photo, began to plummet in the face of the grinding continuation of warfare.

U.S. officials soon realized they needed to tamp down expectations of an imminent victory. In May 1945, the Treasury Department released a propaganda film, My Japan, in which an announcer with a faux Japanese accent taunted Americans, saying that Iwo Jima was simply a minor “island outpost” and boasting, “You have not yet faced the best of our armies. You have faced only 10% of our worst. Our first-line fighters, millions of them, wait for you on battlegrounds of our own choosing.”

The Treasury gave its war bond salespeople a similar script. It suggested they say Iwo Jima was merely “an outpost,” and that “as far as Japan is concerned, the outer Empire—and the men who defend it—are expendables.”

Of course, the planned invasion of the “inner Empire” (the Japanese homeland) never happened, because Japan surrendered after the U.S. attacked Hiroshima and Nagasaki with atomic bombs in early August. Although subsequent generations have questioned the necessity and morality of those bombings, the American public at the time overwhelmingly supported the decision—85% approved and 10% disapproved, according to a Gallup poll.

It’s impossible to know whether Rosenthal’s Iwo Jima photo contributed to that public support for the A-bomb. But after seeing that picture, some Americans surely believed that victory was imminent, and they must have been deeply disillusioned when they realized it wasn’t so—and thus perhaps more likely to support any measure that might render unnecessary a full-scale invasion of Japan.

Over the last 75 years, the photo’s stature has continued to grow. But it has also become decontextualized. It has morphed into an all-purpose symbol of American military heroism, losing its original association with an overly optimistic narrative about the end of the war in the Pacific. And maybe that is as it should be—the photo does accurately convey the bravery and sense of purpose of the flag-raisers.

However, it is worth remembering that in times of war, the government and the news media often craft narratives that serve their purposes: the government wants to gain support for its policies, and media outlets want to satisfy their audiences’ desires. Joe Rosenthal’s flag-raising photo is a prime example of how even accurate reporting and legitimate feats of heroism can contribute to misleading narratives. 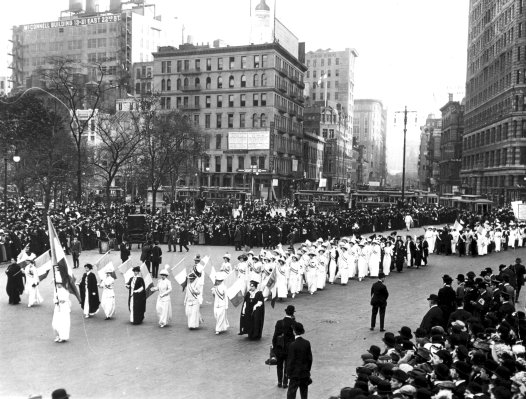 How Diversity Helped the American Suffrage Movement Succeed
Next Up: Editor's Pick