Back Home in Oregon, U.S. Man Says He Flouted Request to Remain in Cambodia After Westerdam Passenger's COVID-19 Diagnosis

Health officials stand guard outside the MS Westerdam in Sihanoukville, Cambodia on Feb. 17, 2020. After the ship was declared free of coronavirus, one elderly American woman was later found to be infected while transiting in Malaysia.
Photo by Paula Bronstein/Getty Images
By Jasmine Aguilera

Comedian Frank King, a hired performer on the Westerdam, was until this past weekend one of hundreds of passengers and crew members on the Holland America cruise ship who were being held in Cambodia until it was determined that they were free of COVID-19.

Now back in the U.S., however, he told local reporters that he left through the back of a hotel in Cambodia, against the wishes of security, to return home.

“People think I jumped a quarantine,” King told The Oregonian in a Facebook live interview on Wednesday. “I just dragged my bags out of the hotel. The security people said ‘we’d rather you didn’t leave.’ I said well, you know, unless you’re going to arrest me — and of course they can’t, I’m not doing anything illegal.”

King, who describes himself as a mental health comedian, told reporters upon his arrival in Seattle on Monday that he left the Cambodian hotel because he had paid speaking events planned in the U.S. that he didn’t want to miss. He has claimed that he had multiple clearances from the Centers for Disease Control and Prevention (CDC). The CDC did not immediately return TIME’s requests for comment.

King declined TIME’s request for an interview, but told local Seattle news outlet KOMO, that while there “was no official ‘you can’t leave’ [at the hotel], if you tried to go out the front door with your luggage, security would stop you,” King said. “But if you went out with your backpack and you were sightseeing, not a problem.”

The Westerdam cruise ship was permitted to dock in Cambodia on Feb. 13 after being rejected by Japan, Taiwan, Guam, the Philippines and Thailand over fears that passengers onboard carried COVID-19. After it docked, health officials in the country first tested the passengers and crew members for signs of the virus before permitting them to exit the ship, according to a public statement by Holland America.

Some were permitted to leave and were transported by the cruise line to Phnom Penh, and then flown home. Others remained at hotels in the city until flight arrangements could be made, which has been complicated by the fact that some countries are denying entry to those who were aboard the cruise ship, according to the Associated Press. The funneling process, which involves 1,455 guests and 802 crew members, has taken days.

The repatriation process has also been complicated by the case of an 83-year-old American woman, who made it all the way to Malaysia having been cleared to fly home and passing those initial virus checks before she started feeling ill. She was then diagnosed with COVID-19. At that point, the process of disembarking passengers from the ship was halted, the the cruise line said in a statement, and everyone who was still in Phnom Penh was asked to remain at their hotels pending test results. That included King, a resident of Eugene, Oregon, who told local Oregon news outlet Fox 12 that he did not have any symptoms and that the CDC results indicated he had not contracted the novel coronavirus.

Read more: Cruise Passenger Whose Coronavirus Infection Went Undetected Shows It May Not Be Possible to Stop the Outbreak From Spreading

“So I thought, you know, I’m outta here,” King told KOMO. He claims he went to the back gate of the hotel with his luggage, where he was confronted by a hotel official but left regardless. He flew from Cambodia to Bangkok, then to Dubai and lastly Seattle, where Customs and Border Protection (CBP) permitted his entry. King did not respond to TIME’s request for further details on his itinerary.

“Mr. King is a U.S. citizen, as such the Privacy Act precludes me from discussing details about his travel history,” Jason Givens, a CBP spokesperson, said in an emailed statement to TIME. “A U.S. citizen would be permitted to enter the U.S., however, travelers with a nexus to China or [COVID-19] would be required to undergo further screening by the CDC upon arrival to the U.S.”

King told Fox 12 and The Oregonian that the CDC did examine him upon his arrival in Seattle, and that he has since checked in with his doctor and the Lane County Health Department in Oregon. A spokesperson for the Lane County Department of Health and Human Services (HHS) tells TIME that, though privacy laws prevent the agency from disclosing whether or not King has had communication with them, it is standard protocol for the department to monitor anyone who has been referred to them who has been in mainland China or has had contact with someone diagnosed with COVID-19.

The Lane County HHS has already received several referrals from the state or other health agencies since the start of the COVID-19 outbreak, spokesperson Jason Davis tells TIME. For safety reasons, the department is not requiring these identified individuals to check into the facility in person, but is guiding them through self-isolation and checks in on them daily.

Holland America did not respond to TIME’s request for comment, but has reportedly fired King, according to Fox 12. The outlet also reported that King’s first speaking event was canceled.

The Cambodian Ministry of Health announced Wednesday that all remaining passengers and crew members had tested negative for the virus and are now permitted to travel home. 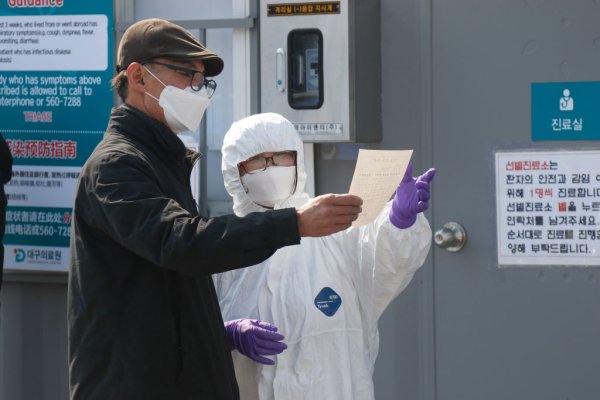