Worrying About 'Work-Life Balance' Can Be a Trap. Here's What to Try Instead

Friends and family often tell Amanda D’Esterre that hectic work schedules are “just the way it is.” But D’Esterre likes to push back. “That shouldn’t be normal. I know it is, but it really shouldn’t be. Take time for yourself.”

D’Esterre, 29, knows first-hand that “the hustle” can take a toll. Her mother worked as a high-powered financial executive, a position which gave her mother a sense of purpose and the family financial comfort, but also involved long hours and lengthy commutes. It also left D’Esterre deciding, while she was young, that these rewards alone wouldn’t be enough for her.

“In my mind, I was like — I never want to do that,” she says. “I don’t think work is that important or worthwhile. I’d rather spend time with my family and friends and have a life outside of work.”

D’Esterre, now working as a case manager, is among many younger adults who are rethinking how they prioritize their careers compared to other parts of their lives. Yes, plenty of Millennials and Gen Zers have embraced so-called “hustle culture,” putting in long hours at work while they’re still young in hopes of accelerating their careers. Past generations behaved similarly. What’s different now, experts say, is that today’s young workers are increasingly focused on the “life” part of “work-life balance.” A 2015 study from the Center for Work and Family at Boston College found that only 20% of Millennials said they would want to advance their careers if doing so meant losing personal or family time. Whereas previous generations seem to have been more willing to sacrifice their personal lives for jobs, says study co-author Brad Harrington, Millennials appear to be putting a “stake in the ground” to say “I do not want to have a job that’s all-encompassing, I do want to have the ability to work more flexibly than might have been the case in the past.”

But at the same time, technological developments have made it harder for Millennials and Gen Zers to detach from work — their grandparents didn’t have to worry about that 11 p.m. email from the boss. Indeed, modern workplace connectivity has employees of all ages rethinking their relationship to their job. So if you’re looking to reset your work-life balance, these expert tips can help.

Identify what matters — and who

The phrase “work-life balance” could be causing more harm than good, says Stewart Friedman, the director of Wharton’s Work/Life Integration Project and author of Parents Who Lead. It suggests work and life are in opposition to each other, he argues, and that it’s necessary to take from one to give time to the other. Instead, Friedman says that workers should reconsider how different parts of their lives affect one another other.

With this all in mind, says Friedman, workers should take some time to think about how all their relationships with these individuals impact each other. For instance, a boss might want an employee to stay late to complete a project, but that could mean the employee missing their child’s bedtime routine. But instead of marching into the boss’s office to demand more time off, Friedman says that the employee should open up a dialogue about why it will likely leave them stressed and distracted the next day if their child is upset, and come up with an alternative way to get the project done — such as coming in early the next morning.

Friedman says that people who are most successful at finding solutions are willing to experiment until they discover ones that work. Ultimately, says Friedman, people who go through this thought process tend to shift their attention away from the workplace. He adds that research shows that workers who try out new solutions to build harmony between their work and personal lives actually receive better performance ratings from colleagues, and tend to feel better about their lives overall. Of course, how receptive employers and managers are to this strategy will vary.

Don’t forget your own wellbeing

If you want to succeed at work, it’s important to play the long game, says Bryan Robinson, a psychotherapist and the author of #Chill: Turn Off Your Job and Turn On Your Life. Although working very hard might give you a boost in the short term, he believes that young people tend to underestimate the long-term consequences of workaholism. Robinson says his younger patients often exhibit the consequences of a workplace culture that seems to require employees to “produce and move faster.”

“Everything is quick, fast, let’s-get-it-done. We know for a fact that will burn you out,” says Robinson. “The body will push back.”

Robinson urges workers who feel like the job is taking over their life to regain their focus on the here and now. Workers should ask themselves the following questions, he says: Are they taking care of their body’s basic needs? Are they tired, hungry, lonely, or angry? Are they maintaining boundaries in their lives, or do they find it difficult to stop working even on vacation?

Finally, Robinson argues that it’s important to find tools to keep calm during even the most hectic workdays, such as taking a few moments during the day to meditate. That could be as simple as pausing to listen to the sounds of your environment — your breath, bird sounds, or even the clacking of computer keys in your office. Another simple technique is to concentrate on a person, place, spiritual figure or pet that makes you feel calm.

“A lot of people think, ‘if I have to balance my life, I won’t be as productive, or I won’t be as successful.’ But it’s the exact opposite,” says Robinson. If you regularly pay attention to the present moment, he says, “you basically are teaching your mind that you don’t have to be rushing and hurrying. And you start to feel more up to whatever the challenge is or whatever the obstacles are. You’re able to figure out a way around them.”

Kathleen Gerson, a professor of sociology at NYU, argues that offering tips to establish “work-life balance” can be a trap, because it can imply the burden falls solely on workers to manage their lives. Instead, she argues that employers need to ensure their workers are able to have a healthy attitude towards their careers, and that workers need to advocate for better treatment.

Part of the work-life balance question, after all, comes down to benefits. Unlike many other high-income countries, Americans are not guaranteed paid family leave or even paid sick leave. Even when Americans are guaranteed vacation days, many of them don’t take all of their allotted time off; according to one study, 55% of workers left some of their vacation days unused in 2018. Gerson says that her research has found many workers don’t take time off because they’re afraid of negative repercussions at work. Employers, she says, often send “subtle message that, yes, these [benefits] are available, but if you take them, we will wonder about your commitment to your job.”

Gerson says that history has shown that legislation can have a powerful affect on work culture — unemployment benefits and the 40-hour workweek were the result of legislation passed during the Great Depression, after all. She believes that a national requirement for businesses to provide leave would benefit all workers by changing what’s considered table stakes for workers. 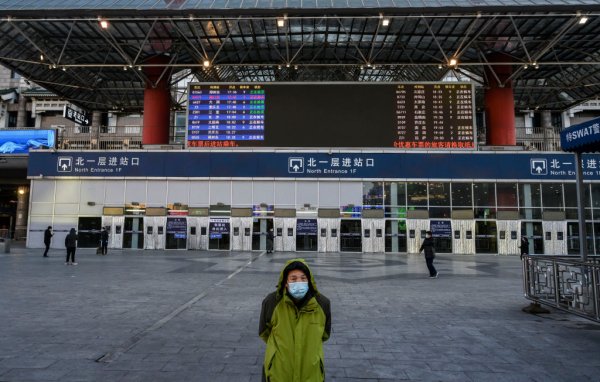 China's Economy at 40-50% Capacity Amid Coronavirus, Data Suggests
Next Up: Editor's Pick