Bill Cunningham in Paris in 1971
Greenwich Entertainment
By Stephanie Zacharek

Even those of us who used to await and savor Bill Cunningham’s street-fashion photochronicle every week in the New York Times—where his work appeared from 1978 to 2016—probably had no idea how precious, in time, those photographs would come to be. Cunningham had two beats: society parties and, better yet, the polychrome cavalcade of fashion as seen on the streets of Paris and, most frequently, New York. His “On the Street” column, which featured candid pictures of individuals arranged into themes—men and women all wearing yellow coats, for example—was an anthropological study in the making. In Mark Bozek’s marvelously intimate documentary The Times of Bill Cunningham, Cunningham himself says—in an on-camera interview Bozek conducted in 1994—that he was hardly a photographer at all. He considered himself a “fashion historian.”

Cunningham was easily both, and Bozek’s film—narrated by Sarah Jessica Parker—captures both his artistry and his fizzy, elfin charm. You might wonder why we need another Cunningham documentary. Didn’t Richard Press’ superb 2010 Bill Cunningham: New York cover it all? Bozek’s film is a more personalized work, with that 1994 interview as its backbone. It’s something of a companion piece to Cunningham’s delightful memoir, Fashion Climbing, published posthumously in 2018. (Cunningham died in 2016, at age 87, though you could catch him wheeling through the streets of New York on his bicycle almost until the end.) Cunningham tells some of the same stories in Bozek’s film, but it’s wonderful to see and hear them tumble forth, punctuated by an impetuous grin here or an animated cackle there.

Cunningham was born in Boston and moved to New York as a teenager to work at the ultra-elegant Bonwit Teller department store. In time he began designing hats under the name William J. (he didn’t want to use his full name, lest he embarrass his discreet Bostonian family), eventually opening his own studio, though he had to work as a janitor in the building to make that happen. His hats were inventive and fanciful, concoctions that might feature octopus arms pretzeled flirtatiously around the wearer’s eyes, or mini-fountains of feathery plumage. (They were worn by socialites, but also by Joan Crawford, Ginger Rogers and Marilyn Monroe.) He did a stint in the Army during the Korean War, and later worked as a fashion columnist for Women’s Wear Daily. But when the great fashion illustrator and bon vivant Antonio Lopez gave him a camera as a gift, in 1967, instructing him to use it as he would a notebook, Cunningham found his most joyful means of self-expression, taking pleasure daily in capturing the way men and women around him used clothes to write their own mini-autobiographies.

Bozek includes examples of Cunningham’s thrilling on-the-street work—club kids swaggering around in 1980s big-shouldered jackets, socialites swaddled in cashmere as they pick their way around New York City’s humbling, egalitarian puddles—and makes a lively dash through Cunningham’s life and career. He suffered a serious bicycle accident in 1993 (though that hardly stopped him from hopping on again, once he’d recovered from his bruises and broken collar bone). In 2008, the French Ministry of Culture awarded him he Legion of Honor for his longtime coverage of Paris fashion. Bozek’s interviews capture Cunningham’s crackling joyousness, but occasionally his subject will stop, mid-sentence, and look down, shielding himself from the camera. Cunningham’s embrace of the world was warm and rapturous, but his sensitivity and shyness was part of that, too. The AIDS epidemic, and its decimation of the New York artistic community, hit him particularly hard. Bozek’s film includes a story even devoted Cunningham lovers may not know: When Lopez became ill and had no insurance for treatment, Cunningham, who notoriously led a rather monastic, nonmaterialistic life, bought a painting from him for $130,000—and then returned it so the artist could sell it again.

All lives are made of shadow and light, and The Times of Bill Cunningham acknowledges that. But through it all, spending time in Cunningham’s presence is bliss. At one point Bozek, who is always off-camera, asks his subject, “What’s the hardest thing?” “Spelling!” Cunningham answers, without even having to think about it. And he flashes that broad, guileless smile, knowing, probably, that putting letters in the correct order on a page could fail any of us in the face of great everyday beauty. The language of clothes, and the way people wear them, needs no words. 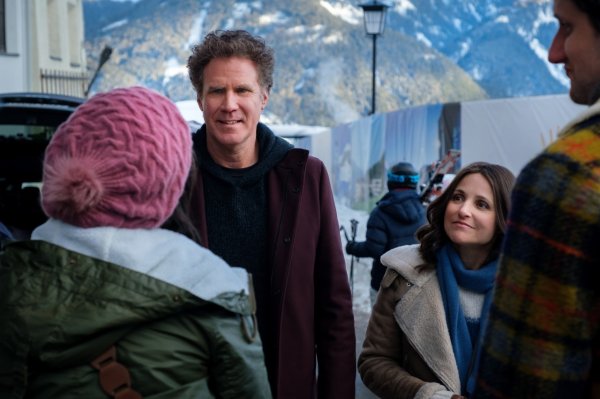 Downhill Is an Uphill Slog That Doesn't Justify Its Remake of the Darker, Subtler Force Majeure
Next Up: Editor's Pick