This handout photo provided by the Lost Art Koordinierungsstelle Magdeburg, the German government agency charged with documenting and ascertaining the origins of artworks appropriated by the Nazis between 1933 and 1945, shows the painting "The Veiled" by Otto Greibel on Nov. 18, 2013 in Berlin. The work is among the approximately 1,400 works German authorities confiscated from the Munich residence of Cornelius Gurlitt.
Lost Art Koordinierungsstelle Magdeburg
By Simon Shuster

In the summer of 1937, not long before the Nazi annexation of Austria, Adolf Hitler initiated a purge of modernist art, which he had deemed “degenerate” and antithetical to his ideas of German cultural purity. Under the direction of his minister of propaganda, Joseph Goebbels, Nazi bureaucrats and art experts fanned out across the country and confiscated thousands of artworks, including masterpieces by Picasso, Matisse and Renoir. Over the next year, most of the works were sold off at bargain prices in what was likely the largest art sale of the 20th Century. Thousands of these works have since wound up at museums and in private collections around the world, leaving their dispossessed owners little chance of recovering them.

Over the past few months, the echoes of this unresolved Nazi crime have emerged through the saga of Cornelius Gurlitt, the 81-year-old son of a Nazi-era art dealer, whose private collection was found to include hundreds of works of “degenerate” art. This week, Gurlitt reached a deal with the German government that will likely allow him to keep nearly all of them. The former owners of these works, including the heirs of Jewish collectors who died in the Holocaust, will only be able to get them back if they can prove that artworks in Gurlitt’s possession were taken from them by the Nazis more than 70 years ago. That is an incredibly heavy burden of proof to lay on their shoulders, especially considering that the contents of Gurlitt’s collection have mostly been kept secret.

“How can someone file a claim if they don’t even know what Gurlitt has?” asks Steffanie Keim, an attorney and expert on art recovery based in New York City. “This is not much of a solution,” she adds. “It’s still very much in his hands who does research on what works of art and whether he will consider them looted or not.”

So far, German privacy laws have prevented authorities from making public even half of the works found in Gurlitt’s possession two years ago, and according to his lawyers, only about 3% of the roughly 1,280 artworks found in his Munich apartment are suspected of being Nazi loot. The rest, they claim, are clearly his property and will remain that way. “In Germany there are many public and private collections that contain a much higher proportion of potentially stolen art than the Gurlitt collection, but no one appears to be imposing any sanctions on these collections or the gallery directors responsible for them,” Hannes Hartung, one of Gurlitt’s attorneys, said in a statement in February.

Art experts back this claim. Over the years, private collections around the world have come to contain thousands of pieces of Nazi-looted art through auctions, trades or inheritances, and their former owners have almost no way of identifying these works, let alone getting them back. In recent decades, one of the most common channels for this loot to be exposed is through the efforts of major auction houses like Sotheby’s, the world’s largest purveyor of art.

Like some of its peers, Sotheby’s now has an in-house research team devoted to making sure that the art it sells is not Nazi loot. Lucian Simmons, who heads this team at Sotheby’s, says that the Nazis removed about 16,000 works of art from German museums in 1937 and 1938, a process known as “deaccessioning.” Some of the works were destroyed, others were sold abroad, while a large portion went to a small group of art dealers who were approved to trade these works, including Gurlitt’s father Hildebrand, who died in 1956. “These do come up,” Simmons tells TIME. “They come up for sale at auction houses around the world.”

In most cases, a few telltale signs can expose them as works that were confiscated during the Holocaust, such as markings and dates on the back of the canvas or the absence of sales records and provenance documents. The owner will often not know the history of the work, having perhaps purchased it on the cheap at an art sale in the developing world, for instance in India or the United Arab Emirates. To turn a quick profit, the work will then be brought to the auction block at a place like Sotheby’s in New York City. “And the whole scheme would then unravel in a matter of days,” says Simmons, “because major auction houses have due diligence procedures to catch that.”

That does not mean you would automatically end up in trouble. In fact, Sotheby’s does not even have the right to publicize its discovery of art with a tainted history, as that would violate its confidentiality agreements with prospective sellers. The best that Simmons and his team can do is encourage sellers to contact the former owners and inform them that their Nazi-looted property has been found. But their clients always have the option of doing otherwise.

In the Gurlitt case, the octogenarian hid his enormous collection in the apartment where he has lived like a hermit since the deaths of all of his immediate relatives. Under German law, he could have gone on like that until the end of his days. The statute of limitations has long expired on the Nazi crimes of confiscation and art theft, so Gurlitt could simply have refused to negotiate with any of his artworks’ former owners, invoking legal technicalities to fend off their claims for restitution. Instead, according to his lawyers, Gurlitt has said that if any of his works “should be justifiably suspected of being Nazi-looted art, please give them back to their Jewish owners.”

“I think it’s excellent news,” says Jutta von Falkenhausen, a Berlin-based lawyer who works on art-recovery cases. “To me the most exciting message for the looted art debate is that Gurlitt, as a private individual, has committed to follow his moral obligations.” Around the world, many private collectors and even state-supported museums have refused to take that step, she says. “We have outrageous cases of collections who we know have looted art of the most obvious kind, and who say, ‘Oh, well, we obtained this in good faith, we have no problem here.'”

While his decision has been welcomed, the fact remains that if Gurlitt’s collection had not come to light in the press by accident last year amid an unrelated tax investigation, many victims of these Nazi-era crimes might never have known about the treasures he had stashed in his Munich apartment and the other homes his family owns in Austria. So for the thousands of other collections still tainted with the legacy of Hitler’s purge, the Gurlitt case may offer a different lesson: Guard your secrets well. 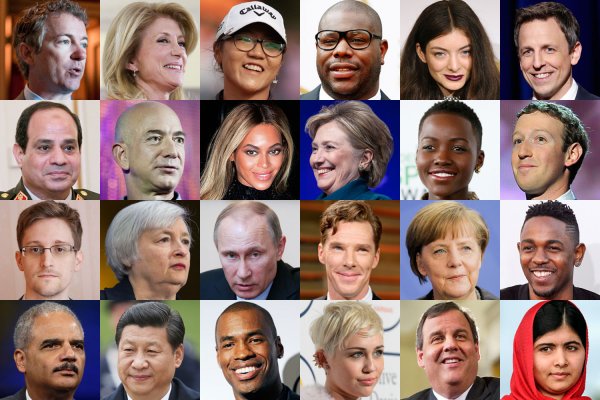 Who Should Be on This Year's '100 Most Influential People' List?
Next Up: Editor's Pick