A Juul Labs Inc. e-cigarette and flavored pods in Brooklyn on July 8, 2018.
Gabby Jones/Bloomberg via Getty Images
By Jamie Ducharme

As beleaguered e-cigarette maker Juul Labs tries to distance itself from its teen-friendly image and convince the world its products are for adult smokers only, a new lawsuit in Massachusetts claims the company advertised on websites for kids’ television networks and provided free products to social-media influencers and celebrities that appeal to youths.

Vaping “is a public health crisis in Massachusetts and around the country,” the state’s Attorney General Maura Healey said at a Feb. 12 press conference announcing the lawsuit. “Today we’re suing the company that started it all.”

Juul’s splashy 2015 launch campaign, Vaporized, has long been the subject of scrutiny for critics who allege the company promoted its nicotine-rich cigarette alternatives to children and teenagers. Healey’s complaint, which initializes the lawsuit process, presents damning new details about the way the campaign was allegedly conducted and publicized.

A Juul spokesperson told TIME the company has not yet reviewed Healey’s complaint, but remains “focused on resetting the vapor category in the U.S. and earning the trust of society by working cooperatively with attorneys general, regulators, public health officials, and other stakeholders to combat underage use and transition adult smokers from combustible cigarettes.”

When Juul began working with Canadian marketing agency Cult Collective to formulate its launch campaign, the Cult Collective team proposed one that contrasted Juul’s sleek, techy products against old-school phones, boom-boxes and joysticks—products familiar to adults, according to the complaint. Juul “rejected it and chose an alternative campaign that would appeal to a cool, younger audience—people who are young, urban, fashionable,” Healey said at the press conference.

The campaign Juul ultimately ran with featured bright, flashy colors and cast young, fashionable models—some of whom, the complaint says, company employees feared looked too young to appear in advertisements for a product that contains nicotine. The resulting images ran on Times Square billboards, in print publications and online.

According to the complaint, Juul purchased banner ads on kid-friendly websites including nick.com and nickjr.com (both associated with the children’s television network Nickelodeon), seventeen.com, cartoonnetwork.com, hellokids.com, girlgames.com, onlinemathlearning.com, and socialstudiesforkids.com, among others.

Juul also aimed to partner with a number of celebrities and social-media influencers with young fanbases, including Kristen Stewart, Jennifer Lawrence, Robert Pattinson, Miley Cyrus and Cara Delevingne, even providing some individuals with free e-cigarettes, the complaint says. Juul has said it never had a formal influencer program.

While the Vaporized campaign was pulled after only six months and Juul’s co-founders have since said it was a mistake, Healey’s complaint suggests Juul’s dubious relationship with underage customers continued well after it ended.

In one 2018 email cited in the complaint, a Juul employee appeared to advise a Massachusetts resident about how they could skirt the state’s tobacco-purchasing regulations. The customer, who attempted to ship products to a town where the tobacco-buying age was 21, failed online age verification and had their order cancelled. In an email, the Juul employee suggested they instead have products shipped to a nearby area where the age of purchase was 18. “If you have friends or relatives in Quincy, MA, you may use their address as a shipping address for your order,” the representative wrote.

Juul’s sales records also show that it shipped products to legally underage customers, as well as to college dormitories and mailrooms, the complaint says.

In part due to mounting scrutiny over its early sales and marketing practices, Juul has halted all U.S. advertising and social media promotions and pulled its flavored products, which many public-health experts say appeal to children, from the market.

“Some things have changed,” Healey said at the press conference, “but you can’t unring the bell.” 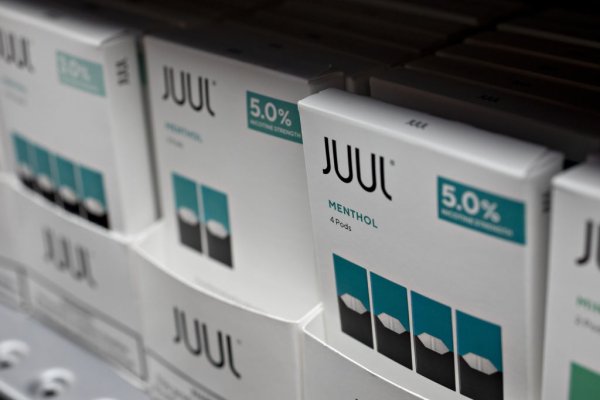