Samsung’s back with another trio of smartphones, designed to take advantage of your wireless carrier’s newfound obsession with all things 5G.

At its annual Unpacked event, where the company shows off its upcoming smartphones meant to fill your pockets and empty your wallets, Samsung unveiled the successor to its Samsung Galaxy S10 line of smartphones: the Samsung Galaxy S20. The new line includes the S20, the S20+ and the S20 Ultra. Absurd naming convention aside, the new three phones offer both expected upgrades compared to the S10 line, as well as some impressive features based on some clever engineering. The only thing it doesn’t do is fold in half, but I suppose that’s what the company’s newly announced Galaxy Z Flip is for.

The DNA of each S20 is largely similar, with the devices sharing the same eight-core processor, 128GB of storage and 12GB of memory.

With its aluminum and glass construction, the S20 certainly feels like a premium device, and even solves a few design issues I had with the S10 line. Is there still a hole-punch style camera in the AMOLED display? Yes, but it’s smaller than the last one. Does the high-resolution screen still look great? Admittedly, yes. The S20 features a 6.2-inch display, the S20+ a 6.7-inch display and the S20 Ultra a 6.9-inch one. All of them have an impressive 120Hz refresh rate, making scrolling feel silky smooth, and fast-paced games look crisp despite all the action.

The biggest updates, available on every S20, are 5G support and a vastly improved camera system (though the S20+ and S20 Ultra also support the faster 5G mmWave standard not found on the base S20). The inclusion of 5G is a hugely important one for Samsung, as the company sees the new cellular network tech as a critical component to both content consumption and creation. Still, the rollout of 5G in the U.S. has been a slow one, and available 5G-capable devices are still few and far between. Last year, Samsung’s only 5G smartphone was the Galaxy S10 5G.

But while all three feature new hardware and software enabling some impressive camera tricks, including 8K recording, only the top-tier S20 Ultra features what may be the most in-your-face camera found on a smartphone.

All three phones have an ultra-wide, wide-angle, and telephoto lens on the rear (the S20+ and S20 Ultra also feature depth-sensors for more functional augmented reality apps). A combination of both optical zoom paired with AI-based image enhancements (what Samsung is calling “Space Zoom”) means the S20 and S20+ can effectively zoom up to 30X.

Software additions like Single Take Mode put all those cameras and processing power to good use, and capture whatever you’re recording in multiple ways and saving you the trouble of switching between modes — even if you miss your shot. All S20 models can capture up to four videos and 10 photos all at once.

Other updates include an improved user interface Samsung calls “One UI 2,” and support for Google Duo’s video chat service built into the phone dialer app.

Alongside the new line of smartphones, Samsung is also launching an updated version of its Galaxy Buds, aptly named the Galaxy Buds+, for $149. The wireless earbuds, available for pre-order feature three microphones for improved call quality, and come in four colors.

You can preorder any of the three Galaxy S20 smartphones on Feb. 21, or walk into your wireless carrier of choice to purchase one on March 6. The S20 starts at a cool $999.99, a hundred bucks more than the S10 when it was introduced last year. The larger S20+ will retail for $1199.99. Got a few extra hundreds burning a hole in your pocket? The camera-packed Galaxy S20 Ultra is the one you’ll want to pick up for $1,399.99. Both the S20+ and S20 Ultra are also available in 512GB versions, with the latter also featuring a 16GB RAM option. 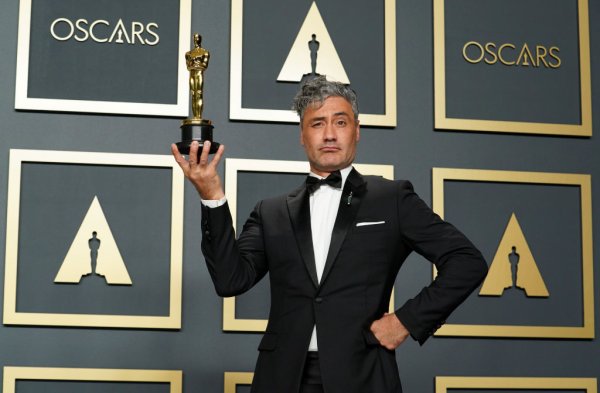 A Physical Therapist Explains How to Fix Taika Waititi’s Apple Keyboard Woes
Next Up: Editor's Pick