What's Next for Ireland After Its Seismic Election Result

Ireland’s Feb. 7 election has delivered a shock result, with Irish nationalist party Sinn Féin winning the most first-preference votes and beating out two center-right parties that have governed for almost a century.

Sinn Féin, which campaigns for the reunification of the Republic of Ireland and the U.K. region of Northern Ireland, has won 24.5% of first preference votes – an increase of 10.7% from its vote share in 2016.

Fine Gael, the party of current prime minister Leo Varadkar, got 20.9% of the vote, while its traditional rivals Fianna Fáil got 22.2%.

Although Sinn Fein won the most votes, its victory is complicated by the party’s decision to field around half as many candidates as Fine Gael and Fianna Fáil for the 160-seat parliament, and by its support being concentrated in certain areas. At the end of counting Monday evening, Fianna Fáil had 38 seats, Sinn Féin had 37, and Fine Gael got 35. The rest of parliament is made up by smaller, mostly leftwing parties, including the Greens on 12 seats.

Before the vote, both Fianna Fáil and Fine Gael pledged not to enter into a coalition with Sinn Féin, citing concerns over both its leftwing policy platform and its history as the political arm of the provisional Irish Republican Army (IRA), a paramilitary group that waged a violent campaign to end British rule in Northern Ireland in the late 20th century. But Sinn Féin’s unprecedented success may pressure political leaders to rethink their red lines.

Huge uncertainty remains over who will lead Ireland in what appears to be a new political era. Here’s what to know about the result.

Who is Mary Lou McDonald?

Sinn Féin leader Mary Lou McDonald, 50, has been credited as an impressive campaigner by the Irish press. She took over the party in 2018 and represents a “generational change” from Sinn Féin’s controversial history, Theresa Reidy, a politics professor at University College Cork told TIME before the vote. “The people associated with the conflict and the IRA are no longer there.”

McDonald is calling for a referendum on reuniting Ireland by 2025. But she also appealed to voters’ frustration with crises in health care and housing that have formed under successive centrist governments led by Fine Gael and Fianna Fáil, promising big public spending increases to deal with both. A popular proposal to reduce the state pension age from 66 to 65 – instead of a planned rise to 67 next year – caught both the establishment parties off guard, allowing Sinn Féin to set much of the agenda of the campaign period.

After the first results on Sunday, McDonald told supporters the election had been a “revolution” in Irish politics. “Sinn Féin went to the people and we convinced them in very, very large numbers that we are the alternative, that we are the vehicle for change.”

Who voted for Sinn Fein?

An exit poll suggests there was a strong generational divide at this election. Around 32% of 18-34 year olds backed Sinn Féin, and Fianna Fáil appears to have done particularly badly among those younger voters.

Sinn Féin’s support only fell below 20% among over 65s, who favoured Fine Gael and Fianna Fáil.

The Green Party also did well with young voters, capturing 14.4% of votes by 18-24 year-olds, according to the exit poll. Overall the environmentalist party got 7.4% of first preference votes – almost three times as much as it got in 2016 – putting it in fourth place.

Who will form a government?

The fragmented parliament makes a coalition government a near certainty. But Sinn Féin’s victory and deep divisions between parties mean negotiations will be fraught, complex and likely take a long time. Even in 2016, when Sinn Féin did not hold such sway in parliament, it took two months after the election for parties to reach a deal that allowed Fine Gael to form a government. Back then, Fine Gael ended up leading a minority coalition, with the main opposition Fianna Fáil agreeing to give them tacit support to ensure a stable government during Brexit.

Fianna Fáil leader Micheál Martin had previously said his party would not enter a coalition with Sinn Féin, citing concerns over their policies and shadowy, unelected IRA figures that some claim still hold sway in the party’s decisions. But speaking to broadcaster RTE after the election, Martin did not reiterate that claim, saying he was a “democrat” and would “respect the decision of the people.” Still, he said there are “significant issues” on compatibility between Sinn Féin and Fianna Fáil.

Varadkar, however, told RTE that his party’s position on Sinn Féin has not changed, ruling out a coalition between the two.

On Sunday, McDonald told a crowd in Dublin that Sinn Féin wants a “government for the people, ideally with no Fianna Fáil or Fine Gael.” She said she had begun to reach out to the rest of Ireland’s parties, mostly small leftwing groups, to “explore over the next days whether that is a possibility”.

Green Party leader Eamon Ryan has said the party wants “to talk to everyone” before making decisions about its role in any coalition, the Irish Times reports.

What does this mean for Irish reunification?

Sinn Féin has said a referendum on reuniting the Republic of Ireland with Northern Ireland by 2025 would be a prerequisite for entering into coalition with any other party.

While domestic issues like housing and health were likely the key to Sinn Féin’s election success, the party’s focus on reunification has helped bring the issue back into the spotlight – along with Brexit. “People aren’t going to vote for Sinn Féin because they think a united Ireland is imminent but they are sympathetic to the idea,” Professor Jonathan Tonge at the Department of Politics at the University of Liverpool told TIME before the election. “For many people in the Irish Republic, it is an aspiration at least.”

Both Fine Gael and Fianna Fáil are officially in favor of a United Ireland, but neither appears keen on holding a poll—a referendum to decide whether Northern Ireland should join the Republic of Ireland—in the near future. Varadkar has previously argued it would be divisive and deliver no clear path forward.

Even if a border poll takes place, it’s unclear if it would be approved in both the Republic of Ireland and Northern Ireland, which would be necessary to start any process of unification. 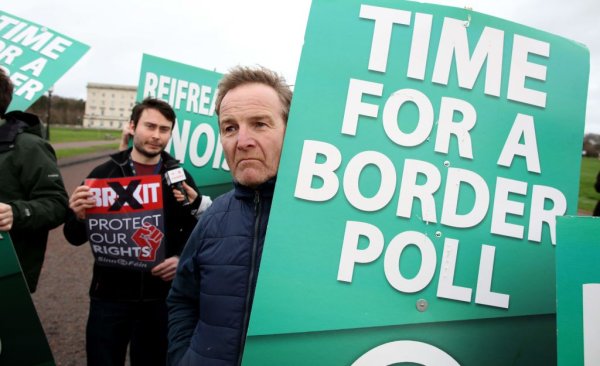 Brexit Revives the Prospect of a United Ireland
Next Up: Editor's Pick