Climate Change is Decimating the Chinstrap Penguins of Antarctica

Chinstrap penguins are exquisitely adapted to their environment. They live and breed in some of the world’s harshest conditions, nesting in the windblown, rocky coves of the Antarctic Peninsula, a strip of land comprising the northernmost part of the frigid continent. In water they are precision hunters, darting after krill, the tiny shrimp-like crustaceans that are their sole food source, utilizing barbed tongues engineered for catching the slipperiest of prey. On land, these 2-2.5-foot-tall flightless birds are prodigious mountaineers, able to scale rocky escarpments in spite of their ungainly waddle. Their perfect adaptation to local conditions makes them the ideal barometer for the future of the region. If anything changes in the marine environment, the health of chinstrap penguins will be one of the most reliable indicators. They are the canaries of the Southern Ocean.

And these endearing, black and white emissaries from Antarctic waters are starting to disappear.

Scientists conducting a chinstrap census along the Antarctic Peninsula have discovered drastic declines in many colonies, with some seeing population reductions of up to 77% since they were last surveyed, about 50 years ago. The independent researchers, who hitched a ride on a Greenpeace expedition to the region, found that every single one of the 32 colonies surveyed on Elephant Island, a major chinstrap outpost, had declined. Overall, the island’s total chinstrap population had dropped by more than half, from 122,550 breeding pairs in 1971 to 52,786 in January 2020. “Such significant declines suggest that the Southern Ocean’s ecosystem is fundamentally changed from 50 years ago, and that the impacts of this are rippling up the food web to species like chinstrap penguins,” says Heather J. Lynch, associate professor of ecology & evolution at Stony Brook University in upstate New York, who designed the study.

“There is something broken in the Southern Ocean,” adds ornithologist Noah Strycker, a member of the penguin census team, and the author of the 2015 book The Thing with Feathers. “Our best guess on why that could be is climate change, which we know is hitting the Antarctic Peninsula region harder than…practically anywhere else in the world except the Arctic.” Warming waters reduce the sea ice and the phytoplankton that krill depend upon for feeding and survival. Ocean acidification, a side effect of increasing global carbon emissions, also impacts their ability to reproduce.

A chinstrap penguin nesting at Spigot Peak, in Orne Harbor on the Antarctic peninsula, on Feb. 6, 2020.
Christian Åslund —Greenpeace and TIME

For the past five weeks Stony Brook scientists have joined forces with robotics and drone specialists from Boston’s Northeastern University to survey relatively unstudied chinstrap penguin colonies along the western coast of the Antarctic Peninsula. Chinstraps prefer rocky, windblown sites for nesting, because they provide the best conditions for keeping eggs safe and dry. Those conditions make research difficult: the scientists endured freezing temperatures, wind, rain and snow to reach the coastal rookeries by small inflatable motorboats, then scrambled among the colonies counting penguins by hand. The robotics team backed up the survey with drone footage. When they return to the lab, members of that team will use the findings to teach computers how to identify nests using artificial intelligence for help in future surveys.

Yang Liu and Vikrant Shah, from North Eastern University, launch a drone from a Greenpeace inflatable. They will later use machine learning to do an automated count of penguin colonies on Elephant Island. The drone counts are later compared to the manual counts done by another team of scientists.
Christian Åslund —Greenpeace and TIME
Scientist Noah Strycker from Stony Brook University Scientist uses a clicker to count chinstrap penguins on Quinton Point, Anvers Island in the Antarctic, on Feb. 4, 2020.
Christian Åslund —Greenpeace and TIME

The researchers surveyed 56 colonies in 37 days. So far, they’ve only released numbers from the Elephant Island sites, which were the first to be surveyed. The final report will be published in a few weeks. But those initial findings appear to be consistent across most colonies. “From whatever limited data we have from the 1980s, chinstrap populations appear to be down by over half,” says biologist Steve Forrest, the team lead on the expedition.

On Jan. 31, 2020, 26 days into the expedition, Forrest motored around the President’s Head promontory on Snow Island to scout for potential survey sites. Some 30 years ago, researchers documented a colony there, but Forrest had heard rumors from passing boats that it had disappeared. The sea was too rough for a census that day, but it didn’t matter. Peering through a pair of binoculars, Forrest saw no evidence that there were any penguins left on the island at all. “I was hoping that we might find the colony after all,” he says. “But not finding one is more along the lines of what we expected.” Some of the older surveys in the more difficult-to-reach areas are unreliable — conducted at a distance, by boat — so an exact assessment of how much has changed in the last three decades is impossible. Still, Forrest says, he is confident that chinstrap populations are declining, particularly in the South Shetland Islands (including Elephant Island) off the coast of the Peninsula. “I saw a lot of abandoned nesting places, so I am inclined to believe that it is a real decline, but the precise extent is uncertain.”

While the numbers of chinstraps may be on the wane, the researchers saw a marked increase in gentoo penguin populations. Gentoos, which have red-orange beaks and lack the distinctive black band around the throat that gives chinstraps their names, are much more flexible about what they eat and the conditions under which they breed. This means that they can more easily adapt to changes in their environment. Forrest calls them “climate change winners” for their ability to thrive in conditions that threaten chinstraps— at least in the short term. Strycker calls the process by which the upstarts take over chinstrap areas “gentoofication.”

Strycker, a committed birder who chronicled his attempt to spot more than half the planet’s bird species in a single year in a 2017 book called Birding Without Borders: An Obsession, a Quest, and the Biggest Year in the World admits that ultimately, it’s not even about the penguins. It’s about krill. Krill are the foundation of the marine food system — the fish that eat them are the fodder for the fish on which almost every ocean predator relies. The fish that we humans eat also primarily rely on krill as a food source. If krill populations are unhealthy, it means trouble down the line for everyone else. But krill, in their krillions, are hard to study.

That’s where the chinstraps come in. Like certain whale species, chinstraps are krill specialists, but they are relatively easier to track compared to whales, with their erratic migration patterns. Chinstrap penguins reliably return to the same rookeries year after year to breed, so by assessing colony health over time, scientists can get a better idea of how the krill they depend on are doing. Which is “why we should care about a bunch of penguins going missing from a remote island that no one’s ever heard of,” says Strycker. “Penguins give us an idea about what is going on in the ocean around us. The ocean processes that are changing in the Antarctic are similar to the processes that are changing everywhere else in the world.” Humans may not have evolved to catch krill the way chinstraps do, but our fate is tied to the tiny crustaceans all the same. 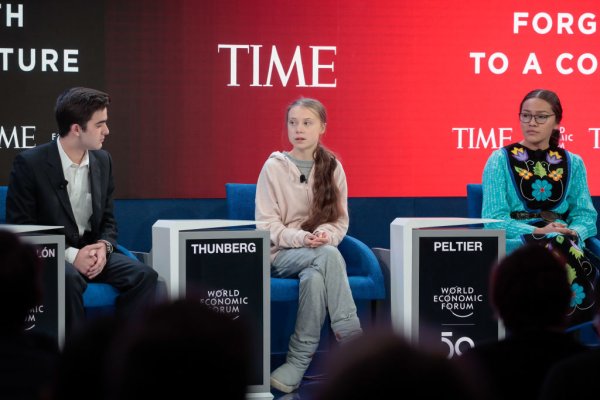 How Davos Became a Climate Change Conference
Next Up: Editor's Pick