‘We Have to Show We’re Willing to Take the Risk.’ How Elizabeth Warren Plans to Turn Around Her Campaign

After doing her signature “pinky promise” with a line of little girls, but before taking the stage to deliver her stump speech to the crowd assembled in a middle-school gym in Concord, N.H., Elizabeth Warren sat in a butter-yellow classroom to explain what keeps her going.

Persistence has been the defining characteristic of the Massachusetts senator’s campaign: the battle cry that made her a progressive icon, and the quality that could propel her through a long slog to the Democratic presidential nomination. In person, Warren is still an Energizer Bunny of ideas and optimism, with no hint of alarm at her position in the polls. Her campaign has become a test case for what many well-educated liberals wish to believe: that Democrats are sane, that policy matters, and that if a smart, qualified woman just works hard enough, she can come out on top.

But what happens, I asked, if Warren tells thousands of little girls that a woman can be President, but she doesn’t win herself? What does persistence mean without results?

“Look,” Warren begins. She is quiet for a long moment, leaning forward in her plastic chair with the intensity of someone who wants to make sure she gets this right. “We have to show that we’re willing to take the risk,” she says slowly. “Because if we’re not, then women will never win.”

Once a front-runner for the Democratic nomination, Warren’s campaign is now up against the ropes. She came out of Iowa with a third-place finish behind former South Bend, Ind., Mayor Pete Buttigieg and Senator Bernie Sanders after spending nearly a year building a formidable ground game in the state. She’s fallen as low as fifth in the latest polls of New Hampshire, a neighboring state that was expected to give her some New England love. Warren positioned herself as the candidate with big plans, but her plan to win the nomination doesn’t seem to be going the way she’d hoped. What was she going to do differently?

Warren doesn’t seem fazed. “You’re asking a political strategy question, and it’s a fair question, but it’s not why I’m in this race,” she says. “I hope we get this right, around the strategy, but it’s not what I spend my time thinking about.”

The Warren campaign prides itself on ignoring the horse race, dismissing what it calls “the pollercoaster” and staying focused on Warren’s message of combating corruption in politics and ushering in structural change. Aides argue she has done a better job of consolidating the support of prominent local Democratic elected leaders than her rivals. If anything, Warren seems to be doubling down on her fundamental belief that politics is about policy.

“As we’ve put the plans together in greater detail, shown how we can pay for them, laid out paths for how we can get them adopted, the change that we could create becomes more real to me, every day,” Warren says, pausing to press her forefinger and thumb together to emphasize the point. “I can see it more clearly. And I can see the impact it would have on the people who need a government on their side.” The comeback plan, in other words, is to stick with the plans.

But presidential races aren’t only about who has the best plans. Narratives are important, and so far the Warren campaign has struggled to project a winning aura. Warren’s stump speech is funny and inspirational, but people started streaming out of the gym in Concord before she was done taking questions. One speech in Derry, N.H., last week was full of press and out-of-state political tourists. A source close to the campaign observes that her volunteer turnout has thinned in the last few weeks. Some allies outside the campaign, all but certain Warren will fall short in New Hampshire, are second-guessing her political positioning, worrying she’s moved too far left to appeal to moderates. “In her effort to catch Bernie, she lost a lot of people who are now with Buttigieg or Klobuchar,” says one, adding that rural areas appear to be solidly with Sanders.

Behind the scenes, Warren advisers are girding for a long, drawn-out fight for the nomination. Three sources close to Warren’s campaign say that her path forward is a version of slow-and-steady wins the race. If Warren can stay in a consistent second or third place while her opponents rise and fall, especially in big states like California and Texas, then she can accumulate delegates heading into the convention without necessarily racking up big first-place victories, the thinking goes. Hanging out in second place also lets the front-runners beat each other up, while she stays above the fray.

The campaign believes it is well-positioned for a long national fight, having already dispatched more than 1,000 staffers across 31 states, with 80% focused on grassroots organizing, according to a January memo from campaign manager Roger Lau. Unlike some of her rivals, who have been laser-focused on Iowa and New Hampshire, Warren has always taken the long view when it comes to a national campaign. “We have the delegate strategy,” says communications director Kristen Orthman. “Which is how you win a nomination.”

But it’s fair to ask how Warren can win the nomination without piling up some of those first-place finishes soon. She’s sworn off big donors, which means she relies on the grassroots to fund her campaign, and her flagging momentum threatens that cash flow. In the last quarter of 2019, Warren raised just over $21 million, a sizable haul but far short of the $34.5 million raised by Sanders. The campaign recently pulled roughly $375,000 worth of ads in South Carolina and Nevada.

Tony Luong for TIME Guests take photos of Elizabeth Warren at her Derry GOTV Event at the Tupelo Music Hall in Derry, NH on Feb. 6, 2020.

Meanwhile, Warren’s opponents appear to be surging. On Monday, Sanders is scheduled to host a host a concert with rock band The Strokes, featuring Representative Alexandria Ocasio-Cortez. Less than an hour south of Warren’s speech in Concord on Sunday, Buttigieg drew a crowd of nearly 2,000 people. After a strong debate performance, Klobuchar has surged to third place in the two most recent New Hampshire polls.

But Warren’s mood seems no different than it did a few months ago. If anything, she seems even more herself: easy smile, soft voice, clear ideas. Beating expectations, she says, is who she is. “I’ve been underestimated, counted out, told what I can’t do, right until I’ve gotten in the fight and actually won it,” she says.

She tells me her “intensity increases” after hearing from people who were rationing insulin because they couldn’t afford it, and points to the two billionaires trying to “buy” the nomination as evidence of a broken political system. “Think of what that means for democracy,” she says. “Democracy, as we understand it, is breaking apart.”

I asked Warren why Buttigieg, 38, has zoomed ahead in the nominating fight with a thinner resume and airier rhetoric. Warren did a little one-syllable laugh and wiped something under her glasses. “You’d have to ask someone else that,” she says calmly.

What if Sanders or Buttigieg won the nomination, and then adopted her plans? “Are you kidding? Fabulous!” she says. “I think the question you’re asking me is, ‘If the things you want to get done actually get done, will your heart be broken?’ And the answer is, ‘No! I’ll lead the parade!'”

“I ran for President not because I’d been looking at myself in the mirror and saying, ‘You’d make a wonderful President,'” Warren continues. “But because I believe I’ve got the best chance both to beat Donald Trump and to make the changes we need to make, starting in January, 2021.”

With that, she bounds out of her seat and hustles out of the classroom towards the stage. 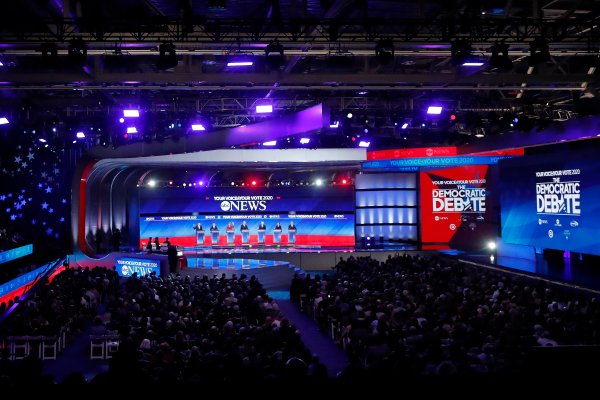 The Debate After Iowa
Next Up: Editor's Pick