Texas Teenager Killed by Bully, Days After Stopping Him From Picking on Another Student: Police

A Texas 16-year-old was shot and killed on Thursday, days after stopping a fight between a 15-year-old boy and another student. Local police arrested the 15-year-old as a suspect in the crime.

The Arlington Police Department stated that the 15-year-old suspect, whom they did not name due his young age, confronted the victim, Samuel Reynolds, with a gun in the apartment complex where Reynolds lived. CBS DFW reported it happened days after Reynolds stopped the suspect from hurting another student.

“Our victim had broken up a fight a few days prior with a smaller — what he described as a smaller– boy that was kind being picked on and after he broke up the fight he started having some trouble with the suspect,” Arlington Officer Christopher Cook told CBS DFW.

Authorities are now investigating how the young teenage suspect was able to get a gun. “This senseless act of gun violence has no place in society and our hometown community,” said Will Johnson, Arlington Police Chief.

Students at Arlington High School gathered together for a vigil on Friday to remember Reynolds. “Sam will always be a part of the Colts Family and we will never forget him,” the school said in a Facebook post, noting that school counselors will be made available to assist grieving students.

Police said they had responded to reports of an injured person in the 900 block of Benge Drive around 4:30 p.m. on Thursday. When officers arrived they found Reynolds had suffered a gunshot wound. He was transported to a nearby hospital where he was then pronounced dead. 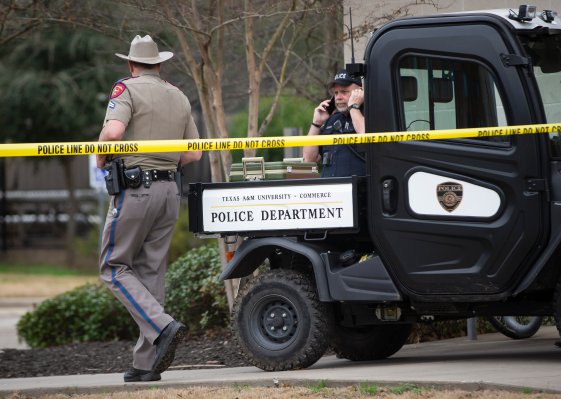 2 Women Dead, Toddler Injured in Shooting at Texas A&M-Commerce
Next Up: Editor's Pick