A previously unknown strain of coronavirus has dominated headlines in recent weeks, and alarmed public health officials with its rapid spread and virulent nature. But it’s really no surprise to the scientists who study infectious disease: it’s just one of several pathogens that have the potential to reach calamitous status.

I have no evidence that climate change triggered this particular virus to jump from animals to humans at this particular time, or that a warmer planet has helped it spread. That said, it’s pretty clear that, broadly speaking, climate change is likely to lead to an uptick in future epidemics caused by viruses and other pathogens. Scientists have understood for decades that climate change would change the way diseases spread, but, as the planet warms, those hypotheses are being tested and scientists are learning in real time. There are many links between climate change and infectious diseases, but I’m going to focus on one particularly novel—and concerning—area of knowledge: how rising temperatures are making our natural immune systems less effective.

Our bodies are amazing disease-fighting machines. One adaptation goes a long way: our warm body temperature can by itself shut down all sorts of unwanted invasions. When a pathogen enters our body, we often get a fever, warming us up even more to fight off disease. Fevers stimulate the immune system and, ideally, the heat creates an environment where it’s difficult for pathogens to survive.

But, as pathogens are exposed to gradually warmer temperatures in the natural world, they become better equipped to survive the high temperature inside the human body. “Every time we have a very hot day, we have a selection event,” says Arturo Casadevall, a professor of microbiology and immunology at Johns Hopkins University’s Bloomberg School of Public Health. The pathogens that survive—and reproduce—are better adapted to higher temperatures, including those in our bodies. And, with that, one of our body’s primary defense mechanisms diminishes in effectiveness.

This is not a theoretical, far-off concern. Last year, Casadevall and colleagues documented in the journal mBio how Candida auris (a fungus that gets into the bloodstream, leading to a range of ailments) emerged simultaneously in patients in three different isolated places—southern Asia, Venezuela and South Africa—between 2012 and 2015. In our globalized world, diseases are often transported by human carriers who hop on planes, but in this case the scientists concluded that similar changing climatic conditions in each of these places likely drove the simultaneous development. It’s hard to say how widespread this effect could be, Casadevall says, but there’s no reason to think that it would be limited to fungi like Candida auris.

The strain of coronavirus that’s spreading now is different than Candida for many reasons, but its likely animal vector—bats—provides an interesting example of how temperatures relate to the spread of infectious disease. Like humans, bats are mammals that maintain a warm body temperature that protect them from disease. But while our body temperature rests around 98.6°F and spikes a few degrees when we’re sick, bats’ body temperatures can regularly jump to as high as 105°F. That means they can carry a whole slew of pathogens without suffering from them. In the near future, as global temperatures inch up, bats will continue to be protected by their body heat, while the pathogens they carry are better able to harm us.

For decades, scientists have recognized that climate change would lead to a range of public health consequences. A 1992 report from the National Academy of Sciences, for example, cited a number of ways climate change could lead to the spread of infectious disease and described the lack of resources devoted to studying the impact of climate change on disease as “disturbing.” Four years later, a widely-cited paper in the Journal of the American Medical Association warned that climate change could increase the spread of everything from malnutrition to malaria, and called for concerted study between doctors, climate scientists and social scientists. That same year the World Health Organization published a 300-page tome on the topic, looking at a slew of ties between climate and health, but at the same time noting that the links are “complex and multifactorial.”

We know more today than we did then, but there’s still a lot we don’t know. When Arctic permafrost melts, what pathogens that have been buried for millennia will be released into the atmosphere—and can we combat them? What will the loss of entire communities, countries and ways of life do to the human psyche? How far will disease-carrying mosquitoes currently isolated to the tropics roam as their range shifts?

Scientists are scrambling to find answers to these questions and many other “known unknowns,” but many unknown unknowns undoubtedly remain—and, in some ways, that’s what I find most terrifying. 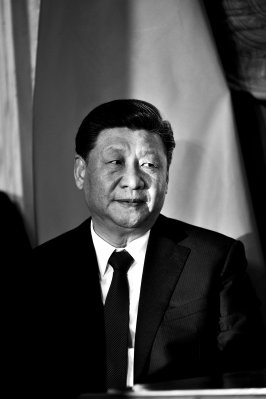 Coronavirus Could Derail Xi’s Dreams for China
Next Up: Editor's Pick