How the Coronavirus Epidemic Could Upend the Global Economy

Empty stalls in the Qianmen area of Beijing on Feb. 1; the Chinese capital has closed down public spaces
Giulia Marchi—The New York Times/Redux
Ideas
By Ian Bremmer
Bremmer is a foreign affairs columnist and editor-at-large at TIME. He is the president of Eurasia Group, a political-risk consultancy, and GZERO Media, a company dedicated to providing intelligent and engaging coverage of international affairs. He teaches applied geopolitics at Columbia University’s School of International and Public Affairs and his most recent book is Us vs. Them: The Failure of Globalism.

There are many ways to measure the costs of coronavirus. There have now been more than 24,000 officially reported cases, and nearly 500 people have died, but we’d be wise not to have much faith in these figures. A report from the Lancet estimated that as of Jan. 25 the true number of coronavirus cases in Hubei province, which includes the city of Wuhan, was not 761, as officially reported, but 75,815.

The impact on China’s economy will be considerable. Quarantine and internal border controls have been imposed, and local officials are now overcompensating in response to criticism from Beijing that they were slow to respond to the initial outbreak. Businesses and schools are likely to remain closed for weeks. Economic activity in many Chinese cities is sharply reduced.

There is also the mounting economic cost for the entire global economy. The outbreak of severe acute respiratory syndrome (SARS) in 2003 knocked one to two percentage points off China’s GDP that year, which then cost one-quarter to one-third of a percentage point in global growth, according to estimates. The larger number of infections from the coronavirus suggests the impact could be more severe this time for both China and the world. What happens in China matters more than ever for the rest of us. Its share of the global economy has surged from 8% in 2002 to 19% today, and it’s now the world’s second largest economy.

Companies in other countries dependent on Chinese supply chains are already facing a slowdown: Japan, Australia, New Zealand, Singapore, Italy and the U.S. have all imposed travel restrictions. Asian countries will see a sharp reduction in the number of arriving Chinese tourists, an important source of growth.

Oil prices have fallen 20% over the past month on expectations of lower demand from China and reduced sales of jet fuel as flights are grounded. Press reports suggest that China’s daily crude-oil consumption has fallen by 20%, an amount equal to consumption in Britain and Italy combined. OPEC and Russian officials are now debating whether to cut oil production to buoy prices. Prices for metals and other construction materials have fallen.

This is also a hit to the “Phase 1” trade deal the U.S. and China concluded last month. China was already unlikely to purchase the additional $200 billion of U.S. goods over two years that it committed to buying. The slowdown will make that figure hard to achieve.

But the greatest cost will come to China’s reputation as a reliable trade partner. In developed countries, health care systems are quick to identify public-health risks and better able to respond to them. China’s top-down authoritarian political system makes things worse. In the early stages of these kinds of crises, local officials try to avoid blame from Beijing by hiding information about outbreaks and the extent to which health facilities are overmatched. In later stages of the crisis, they overcorrect to show Beijing they’ve taken charge of the problem.

In the process, China creates the impression that it has learned little since the SARS crisis, giving the rest of the world reason to try to reduce its dependence on China for growth and production.

We’re moving closer to the day when it is China’s increasingly hefty economy, not America’s, that’s most to blame for a global recession. 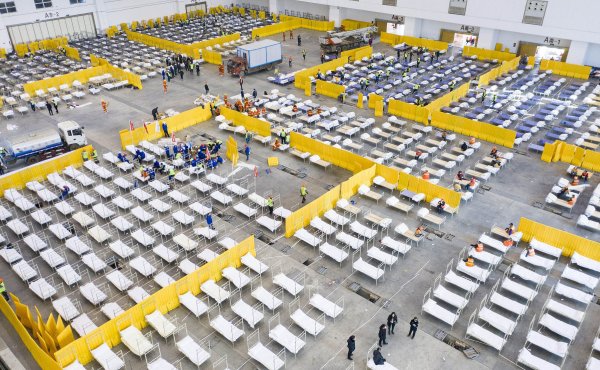 What Ebola Teaches Us About Controlling Coronavirus
Next Up: Editor's Pick