Amidst Lackluster Results in Iowa, Joe Biden Struggles to Reset in New Hampshire

Fresh off of a bruising performance in Iowa and less than a week before the next vote in New Hampshire, Joe Biden is struggling to hit his stride.

“Look, folks. We had a good night last night in Iowa,” the former Vice President told a crowd in Nashua, N.H. on Tuesday. “We think we’re going to come out of there doing well.” Less than 24-hours later, in Somersworth, N.H., he’d tried a new tack. “I’m not gonna sugarcoat it: We took a gut punch in Iowa,” he said on Wednesday.

One thing is clear: Biden’s hopes for an easy march to the nomination have been dashed. With 86 percent of the results of Monday’s Iowa caucuses counted, the one-time front-runner appears to be trailing Pete Buttigieg and Senators Bernie Sanders and Elizabeth Warren, and may soon face a demoralizing finish in which he wins a grand total of zero delegates in the Hawkeye state.

Having built his campaign in part on a theme of resilience, Biden must now figure out once again how to rebound. “This isn’t the first time in my life I’ve been knocked down,” he told voters Wednesday.

The headwinds are strong. Biden ended the year with a little less than $9 million in the bank — half of Sanders’s nest egg and significantly less than Buttigieg’s more than $14 million. Meanwhile, Mike Bloomberg’s late-coming campaign smelled blood in the water. In the wake of Biden’s likely dismal performance in Iowa, the former New York City Mayor doubled his television advertising and increased his field staff to more than 2,000.

But if Biden’s reservoir of confidence is shaken, it’s not entirely cracked. A pro-Biden super PAC, run by longtime adviser Larry Rasky, announced Tuesday morning that it would make a $900,000 media buy in New Hampshire to supplement the campaign’s spending.

And Biden’s supporters argue he’s still got a good shot of coming out of the early states at the front of the pack. While he may not end up shining in disproportionately white states like Iowa or New Hampshire, many expect him to do better in South Carolina and Nevada, where African-Americans and Latinos make up a larger share of the Democratic base.

A Washington Post-Ipsos poll from early January found that Biden was by far the most popular candidate among African-Americans, and a handful of endorsements, including a nod from the chairman of the Hispanic Caucus’ political arm, may buoy his prospects among Latinos. On Wednesday, the 775,000-person union of electrical workers joined the 300,000 unionized firefights in backing Biden — a potential boost to Biden’s working-class appeal.

On Tuesday and Wednesday, Biden campaign staffers worked to spin the Iowa results as a good thing for their candidate: Sanders’ strong showing in Iowa is bracing to many centrists, moderates and even progressives who want, above all else, to beat Trump. Biden’s staffers argue that fears over a potential Sanders’ potential nomination is a useful reality check that will serve Biden. As Democrats—and especially the Democratic donor class—recognize that they need to rally behind a consensus candidate, Biden remains the most obvious choice.

But with Buttigieg insurgent and Bloomberg lurking in the wings, Biden must prove that he’s the middle-of-the-road candidate who can win in for a long, hard fight.

This week, the 77-year-old was slow of the mark, at first refusing to deviate from his Iowa script. The stage in Nashua, N.H. on Tuesday morning was decorated with the same yellow firefighter posters that he’d used in Iowa, and his stump speech launched with the same stale joke.

But by Wednesday, Biden appeared willing to switch gears. After months of playing Iowa Nice, Biden was suddenly on the offensive. Taking the stage in a former church in Somersworth, N.H., on Wednesday, Biden warned a small-town crowd of supporters that Sanders atop the Democratic ballot this fall could spell troubles for candidates in other races. “Every Democrat will have to carry the label Senator Sanders has chosen for himself,” he warned darkly. “He calls him — and I don’t criticize him for this — he calls himself a democratic socialist.”

Asked about his tonal switch, Biden adviser Symone Sanders smiled. “We came to play,” she says. “The Vice President has been a fighter his entire life and we saw that here today.”

Still, there were signs that Biden still wasn’t totally comfortable with the new tone. His aggressive critiques of his top rivals were loaded onto teleprompters and he didn’t respond when reporters asked him on the way out of the room why he was going negative. Former New Hampshire Republican Party Chairman Fergus Cullen, a NeverTrumper who is backing former Massachusetts Gov. Bill Weld’s primary against Trump, noted Biden’s shakiness. “If you don’t have your stump speech down on February 5…” he mused, leaving the thought incomplete.

This was not, after all, the campaign Biden expected to be running. Despite warnings from advisers and family members that a 2020 race would be unlike any past race, Biden assumed that his eight years as Vice President would position him as the natural heir of Obama, that donors would fall into place, that activists would have the same affection for him that they had for Obama, and that the Democratic Party’s rules would favor a hard-working pol who has done the chicken-dinner circuit since the ’70s. Instead, Biden confronted a Democratic electorate that, at least in some quarters, seemed ready to turn the page.

Monday night in Iowa ended in something of a recurring nightmare for the long-time presidential hopeful. Biden, who has tried and failed to win the Iowa caucuses twice before—in 1988 and 2008—ended the day by giving a speech near a precinct that, after failing to push him above the viability threshold, awarded a symbolic victory to Cory Booker, who is no longer even in the race.

Privately, Biden’s campaign staff acknowledged the blow that Iowa’s lackluster showing had dealt the once high-flying candidate, and even his most ardent defenders admitted they didn’t see “Joe-mentum” on the horizon. But publicly, his backers doubled down with an air of confidence: the former Vice President, they reminded reporters, has strong name recognition, enjoys an implicit endorsement former President Barack Obama and he alone appears to have lodged himself in President Donald Trump’s craw as a feared rival.

The Biden campaign does not need to be shiny to win. Hillary Clinton’s campaign employed a grind-it-out approach to defeat Sanders, which eventually paid off. Still, Biden entered the race as the candidate to beat, and as he heads into Friday’s debate near Manchester, N.H., he needs to figure out how to regain his edge. 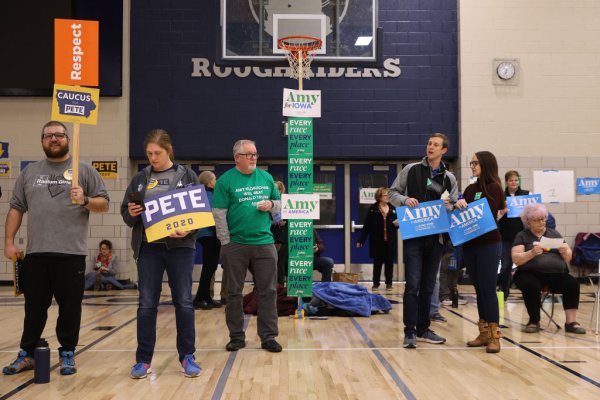 Should Iowa and New Hampshire Still Vote First? It May Matter Less Than You Think
Next Up: Editor's Pick