At least two people are dead after a “targeted” Monday shooting at Texas A&M-Commerce, about 70 miles northeastof Dallas. A third victim, a two-year-old boy, has been released from a local hospital, according to the university.

The university announced Tuesday afternoon that the victims are 19-year-old Dija Matts, a freshman from Garland, Texas, pursuing a bachelor of science degree in public health. The second victim was Dija’s sister, 20-year-old Abbaney Matts, who was not a student at Texas A&M-Commerce. Abbaney’s young son, the third victim, has been released to family.

University Chief of Police Bryan Vaughn told reporters Monday afternoon that the two women were found dead by police, who had received a call about the incident at about 10 a.m. Monday morning.

Jacques Dshawn Smith, 21, believed to be the ex-boyfriend of Abbaney Matts, was arrested in connection with the shooting, Texas A&M Commerce officials said in a Facebook post Tuesday. Smith was arrested on a capital murder charge in the fatal shootings of the sisters. He was not a student at the school, officials said.

“We assure you that we are taking measures to ensure your continued safety on campus and to provide services and support to you all,” he said. “As we unite in mourning today’s event, I know the resolve our Lion family exhibits in times of crisis. Thus, I am confident we can unite in demonstrating that resolve together.”

Students and faculty were instructed to shelter in place on Monday afternoon after police began their investigation of the shooting at the Pride Rock residential hall. Pride Rock remained closed until about 10 p.m. on Monday. University police will increase its patrol on campus, Rudin said Monday evening, and there has been an increase in staff presence at residential halls. All classes and events have been cancelled until Wednesday.

A shooting at a nearby off-campus party last October also resulted in 2 dead, but left 12 injured. 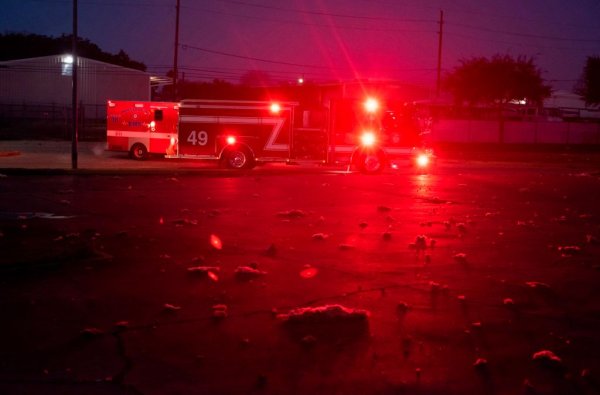 2 Dead in Industrial Building Explosion in Houston
Next Up: Editor's Pick