A Montana lawmaker is facing controversy after he claimed at an event for the state’s Republican Party on Friday that the U.S. Constitution holds that socialists can be jailed or shot, reports say.

State Rep. Rodney Garcia, who represents part of Billings, Mont., in House District 52, also expressed concern about socialists “entering our government” at an event in Helena, Mont., on Friday, according to the Billings Gazette.

Asked by a reporter about the comments on Saturday, Garcia reportedly stood by them.

“So actually in the Constitution of the United States (if) they are found guilty of being a socialist member you either go to prison or are shot,” he told a reporter, according to the Billings Gazette.

“They’re enemies of the free state,” Garcia reportedly said. “What do we do with our enemies in war?”

The state’s Republican Party reportedly spoke out against the comments on Saturday. Spenser Merwin, the executive director of the Montana Republican Party, said in a statement Saturday that the party “wholeheartedly condemns the comment that was made and under no circumstance is violence against someone with opposing political views acceptable,” according to the Associated Press. He said it was a shame that Garcia’s comments had detracted from the weekend’s other events, which were intended to start off the election year.

The Democratic Party, meanwhile, called for Republican candidates to speak out against Garcia’s comments in a statement on Facebook on Sunday.

Prominent Democratic politicians, included self-professed Democratic Socialist Sen. Bernie Sanders, have helped to raise the profile of political platforms thought of as socialist, including the idea of universal healthcare. Meanwhile, conservatives, including President Donald Trump, have sought to discredit liberal opponents by depicting socialist ideas as radical and even dangerous.

Garcia and the Montana Republican Party did not immediately respond to a request for further comment. 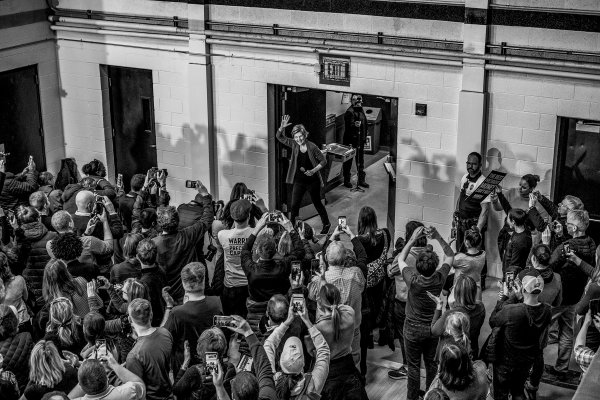