'They Have to Defeat Cynicism.' Jon Favreau on What Democrats Can Learn From Swing Voters

Jon Favreau is on a mission to figure out how the Democratic Party can defeat President Donald Trump. So for the second season of his Crooked Media podcast, The Wilderness, Barack Obama’s former top speechwriter gathered the types of voters Democrats need to win in 2020 and asked them what they wanted. The goal was to learn what they thought of the Trump presidency, and what they wanted from a Democratic candidate.

The top-line result: it’s hard to win over voters when they’re so thoroughly disgusted with politics that they’re tuning you out.

The first thing Favreau noticed in this coveted cross-section of voters was that many of them are barely paying attention to the presidential election unfolding. Most people in the focus groups had only heard of Vice President Joe Biden and Senator Bernie Sanders. A handful had heard of Senator Elizabeth Warren. And the overwhelming sensation was exhaustion.

“People are so turned off by politics and so distrustful of all of our institutions,” says Favreau. “They’re cynical, they’re distrustful, they’re sad.”

Favreau tried to start each focus group with small talk to lighten the mood, but “people brought up Trump immediately,” Favreau says in an interview. “He’s a national psychic wound on our politics. He’s succeeded in making people even more cynical about everything.”

Nearly all the voters were deeply frustrated with the political system. “You have people who say ‘I’m so sick of the parties, I wish they would work together and get something done,’ and then people will say ‘I want the blow up the system, I just want to get something done,'” Favreau says. “Voters are saying, ‘I don’t care which way you do it. Just do something that fixes my life.'”

He noticed a few broad trends. Health care was the top issue for each group. Only a handful of participants said they would consider voting for Trump again, while roughly half said they’d definitely vote for the Democratic nominee.

While Biden and Sanders were the most well-known candidates, neither seemed universally admired. When Biden’s name came up, a few voters suggested he may be too old or out of touch, but mostly Favreau noticed a sort of bland indifference. “I was surprised at how few had an opinion of him,” he says.

Sanders was more divisive. Voters in Pennsylvania and Wisconsin—including several who had voted for Trump—told Favreau that they respected Sanders because “they knew where he stood.” But in Arizona and Florida voters raised concerns about whether Sanders was too far left. “They don’t like Trump, but if we present them with Bernie Sanders, what will they do?” Favreau says.

Favreau asked the voters to name the attributes they’d like to see in their ideal candidate. The responses: honesty, integrity, an even temperament, “someone who’s not going to tweet all the time, someone who’s an outsider, someone who’s not too far to the left.” To Favreau, “it sounded like they were trying to construct Pete Buttigieg.”

Overall, Favreau came away with a sense that Democrats had a bigger opponent than Trump: they had to overcome malaise. “For a Democratic candidate to break through,” he says, “they can’t just beat Trump. They have to defeat the cynicism.” 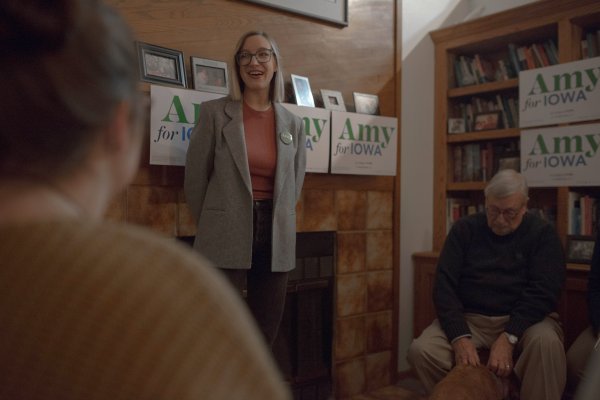 'Who Better to Talk About My Mom?' Amy Klobuchar's Daughter Takes on the Iowa Campaign Trail
Next Up: Editor's Pick