Buttigieg Criticizes Sanders and Biden, Casting Them As Candidates of the Past

Pete Buttigieg at a Town Hall in Vinton, IA on Jan. 27, 2020.
September Dawn Bottoms for TIME
By Charlotte Alter/Decorah, Iowa

For months, Pete Buttigieg has campaigned as a unity candidate, promising to “turn the page” on America’s divisive politics. But locked in a tight race just four days before the Iowa caucuses, Buttigieg sharpened his message on Thursday, suggesting Sen. Bernie Sanders and former Vice President Joe Biden were stuck litigating “the arguments of the past.”

“I hear Vice President Biden say that this is no time to take a risk on someone new,” Buttigieg said at a campaign event in Decorah, Iowa. “But history has shown us that the biggest risk we could take with a very important election coming up is to look to the same Washington playbook and recycle the same arguments.”

“Then I hear Senator Sanders calling for a kind of politics that says you’ve got to go all the way here and nothing else counts,'” he continued, pivoting to an argument for his “Medicare for All Who Want It” plan, the moderate alternative to the “Medicare for All” plan championed by Sanders and Senator Elizabeth Warren. “This is no time to get caught up in reliving arguments from before,” Buttigieg added. “The less 2020 resembles 2016 in our party, the better.”

Criticizing top rivals by name represents a stark shift in tone for a candidate who has often spoken about the “sense of exhaustion” around partisan politics, courted “future former Republicans” and argued he was best positioned to build bridges between different factions of the Democratic Party.

Buttigieg pointedly criticized Sanders and Biden for their recent bickering over their positions on the Iraq War and Social Security and positioned himself as the candidate who would move past old squabbles. He said he was sick of old arguments “because this is 2020, and we’ve got not only to learn the lessons of the war in Iraq but make sure that we don’t get sucked into the war in Iran.”

“I don’t want us to get caught up in an argument over who said what when about Social Security in the 1990s,” he continued. “Because Donald Trump is threatening Social Security and announcing cuts to Medicaid today.”

Buttigieg has long campaigned on the mantle of generational change. Still, his future-forward message seems to be resonating more with older voters than younger ones: according to a January 28 Quinnipiac poll, Buttigieg had the support of only 4% of people under 35. Sanders had 53%.

The attacks on his more seasoned rivals, which Buttigieg repeated at a second campaign stop Thursday afternoon in Independence, came just days before what could be a make-or-break moment for the Buttigieg campaign. The 38-year old former Mayor of South Bend, Ind., has one of the best-organized campaigns in the state, according to local Democratic officials, and Iowa presents an opportunity for him to prove that he can win over the white, Midwestern moderates that form a key part of his electoral coalition.

“We certainly need a very strong finish in Iowa,” Buttigieg told reporters on Thursday. “Because it’s the first chance to show versus tell our capacity to succeed on the ground.”

To that end, the campaign has focused his latest swing on rural areas in the northeast part of the state, with a particular emphasis on counties that voted for President Back Obama twice and then Trump. On Wednesday he visited Jefferson, Webster City, Mason City and North Hampton, all areas that delivered victories for Obama in 2008 and then Trump in 2016—which the campaign made sure to note to traveling press.

“We are competing in areas where [Trump] has been strong in the past,” Buttigieg told reporters in Decorah. “But where I know a lot of independents and Republicans as well as Dems are troubled by this President’s relationship with the truth, upset by the way he has treated both Americans and allies, and looking for an alternative.”

That olive branch to disaffected conservatives has become part of Buttigieg’s stump speech, and a crucial part of his campaign’s strategy: they’re betting that Democrats can win over former Trump voters if they offer them something new.

“Regardless of how you voted before, or what party if any you think you belong to, you belong here, you belong in this effort,” he told a crowd Wednesday in Mason City, repeating his pitch to what he calls “future former Republicans.”

Later, in North Hampton, he drove it home: “I would argue that a good way to make sure we win is to nominate somebody who doesn’t come from Washington, somebody who in fact lives right now in a middle class neighborhood in the middle of the industrial Midwest.”

Iowans who have come to Buttigieg’s events this week say they are attracted to his youth and optimism. “I like that he’s young, I like that he has a military background,” says Diane Bard, 59, a registered nurse who caught Buttigieg’s event in Webster City and called him a “breath of fresh air.”

But the unifying message Buttigieg has sought to project may be giving way to an attempt to draw sharp contrasts with his Democratic opponents in the last days of the race. Speaking to reporters on Thursday, Buttigieg sought to paint his rivals as outdated and tired.

“We can’t get bogged down or caught in those arguments without a view towards the future,” he told reporters. “The next president’s going to face questions and challenges that are different in kind from what has been litigated and argued about in the 1990s.”

It’s hardly unusual for candidates to knock their opponents at the climax of a hard-fought contest. But the change carries particular risks for Buttigieg, who has appealed to voters by casting himself as a different kind of candidate.

“I like his tone,” says Deb Tesar, a 56-year old retired technical writer and registered Republican who went to see Buttigieg in Mason City on Wednesday, where he spoke at a Music Man-themed event site. “He’s upbeat, positive, he’s not confrontational. Some other candidates are like, ‘I’ll fight for you, I’ll fight for this, I’ll fight for us,’ and I just want them to stop the fighting.” 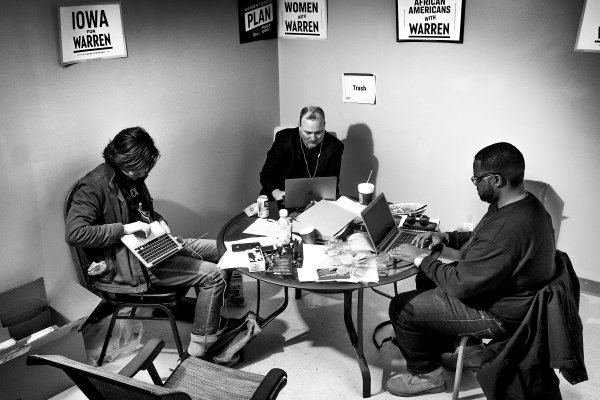 Can Elizabeth Warren's Ground Game Lift Her to Victory in Iowa?
Next Up: Editor's Pick