Will He or Won't He? John Bolton's Potential Testimony Hangs Over First Day of Questions in Trump's Impeachment Trial

Senators had their first chance to ask questions of the prosecution and defense in Donald Trump’s impeachment trial on Wednesday, and while their queries covered topics from executive privilege to American foreign policy, the outcome of the trial could boil down to just one: Will John Bolton testify?

Democrats drove at that point in their very first question, putting the focus squarely on Trump’s former National Security Advisor. “John R. Bolton’s forthcoming book states that the President wanted to continue withholding $391 million in military aid to Ukraine until Ukraine announced investigations into his top political rival and the debunked conspiracy theory about the 2016 election,” read the question by Chuck Schumer, a Democrat from New York, and posed to the House managers. “Is there any way for the Senate to render a fully informed verdict in this case without hearing the testimony of Bolton, Mulvaney and the other key eyewitnesses or without seeing the relevant documentary evidence?”

It was a bold opening gambit by Democrats that established Bolton’s allegations as the new focal point in the historic impeachment trial, with Minority Leader Schumer and his colleagues drumming up urgency over putting Bolton on the witness stand and Republicans trying to block him from testifying.

Bolton’s manuscript reveals the kind of firsthand account of Trump admitting a quid pro quo that Republicans have insisted for months was missing from Democrats’ case. Republicans have reacted by trying to undermine his credibility, dismissing the longtime GOP operative— who served in the Ronald Reagan and George W. Bush administrations before working for Trump for 17 months — as an opportunist looking to cash in on his book sales.

“Frankly, if I listened to him, we would be in World War Six by now, and goes out and IMMEDIATELY writes a nasty & untrue book,” Trump tweeted before questions began on Jan. 29. “All Classified National Security. Who would do this?”

When Trump dismissed Bolton in September 2019, just as the Ukraine pressure campaign was coming to light, it was clear that, unlike his two predecessors, Bolton would not go quietly. After the president announced his firing in characteristically public fashion, tweeting that Bolton was “holding me back!,” Bolton texted conservative media figures to dispute the account. Over the course of the impeachment inquiry, he hinted he had more to share, and soon followed up with the announcement that he was writing a book: “The Room Where It Happened.”

The book title itself gets to the heart of why Bolton would be a crucial witness for Democrats: His account would be the first direct, eyewitness account of Trump explicitly talking about a quid pro quo. Bolton, who has said he would appear if subpoenaed, is “preparing” for the “possibility” that might be subpoenaed to appear in the impeachment trial, according to an email his lawyer Chuck Cooper sent to the National Security Council on Jan. 24—which TIME obtained on Jan. 29— urging a swift review of his manuscript. “If he is called to testify, it seems certain that he will be asked questions that will elicit much of the information contained in the chapter of his manuscript dealing with his involvement in matters relating to Ukraine,” Cooper wrote. “We do not believe that any of that information could reasonably be considered classified.”

Democrats have quickly seized on Bolton’s account not only push to for his testimony— as well as other witnesses including acting White House chief of staff Mick Mulvaney— but for additional evidence as well. They have pressed for the inclusion of documents that have come to light since the House impeachment inquiry concluded in December, including emails from White House officials asserting that the military aid was being held up at Trump’s direction. In their opening arguments, House impeachment managers made the case that these documents would ultimately corroborate the accounts of more than a dozen officials who testified in the fall.

“Witnesses can be clever in their answers,” said Rep. Zoe Lofgren of California, the only member of the House and Senate to have been involved in three impeachment investigations. ”But the documents don’t lie.”

Schumer’s first question was far from the only reference to Bolton on Wednesday, with many Democrats using their allotted time to advocate for his testimony. Sen. Dianne Feinstein, a California Democrat, lobbed a soft-ball question at the House managers about whether Trump’s lawyers are correct when they claim there is no direct evidence of Trump leveraging military aid to Ukraine in exchange for investigations into his political rivals. In responding, Colorado Rep. Jason Crow, a House impeachment manager, said no, ran through some of the House’s evidence of the alleged quid pro quo, and added, “There is a way to shed additional light on it. You can subpoena Ambassador Bolton, and ask him that question directly.”

Four Republican senators would need to vote with the whole Democratic caucus in order to call witnesses for the trial. On Wednesday, it was still unclear whether enough of the undecided Republicans would peel off to vote with the Democrats in the pivotal vote on Friday. Republican senators Susan Collins of Maine and Mitt Romney of Utah have both signaled they are likely to vote to call witnesses; Senators Lisa Murkowski of Alaska, Lamar Alexander of Tennessee and Rob Portman of Ohio are also all being closely watched. Murkowski, Romney and Collins were pointedly given the first opportunity to ask a question on Wednesday.

The Democratic leader still isn’t sure if enough Republicans will join his members when it comes time to vote. “Is it more likely than not? Probably no,” Schumer said Wednesday of the probability of calling witnesses. “Is it a decent good chance? Yes.”

Trump’s defense team pushed back hard on the continued pressure to call Bolton, arguing against his appearance on both constitutional and practical grounds. Bolton “has all the nation’s secrets” from his time as National Security Advisor, Deputy White House Counsel Patrick Philbin argued, which should merit near “absolute” privilege in his conversations with Trump. “To suggest the National Security Advisor — ‘Well, we’ll just subpoena him, he’ll come in and it won’t be a problem’ — that’s not the way it would work,” Philbin said. “There would be grave issues raised attempting to have a National Security Advisor to the President come under subpoena to testify.”

Philbin also addressed the more mundane concerns about Bolton’s appearance in response to a question from Portman. “All of the regular business of this body will be slowed down, hindered, prevented, while that goes on,” Philbin said, talking about how calling witnesses could drag out the length of the trial in the Senate.

And Trump’s attorney Jay Sekulow warned that if Bolton is called as a witness, it could open a Pandora’s box of new witnesses taking the stand. “It should certainly not be, though, that the House managers get John Bolton and the President’s lawyers get no witnesses,” he said. “We would expect that if they’re going to get witnesses, we will get witnesses.”

Tables for both the defense team and the House managers were covered in documents and binders through the long session, and the defense lawyers used old-fashioned cue cards to keep themselves within Chief Justice John Roberts’ request for 5-minute answers: as a defense lawyer spoke behind the lectern, one of his colleagues would hold up a small white card with “2” written on it at the 2-minute mark. They also had cards to count down at 1 minute, and matters of seconds.

Throughout the day, though many raised questions about subpoenas issued by the House, constitutional law, and U.S. policy towards Ukraine, Senators kept returning to questions about Bolton, using their final opportunities to make their case in the chamber for why he should or shouldn’t be called to appear. “We’re not here to argue witnesses tonight,” Sekulow said towards the end of the day, after related questions came up repeatedly. “But it obviously is an undercurrent.”

The Senators know that Wednesday’s and Thursday’s question sessions could have a dramatic impact on Friday’s crucial witness vote. “The momentum is to not have that happen, to not have witnesses,” Sen. John Barrasso, a Republican from Wyoming, said in the halls of the Capitol. “I’m ready to vote to move to final judgment. I think the great majority of Republican senators have gotten to that position.”

But, Barrasso noted: “Some want to still listen to the questions and answers over the next two days, and make their final decision on Friday.” 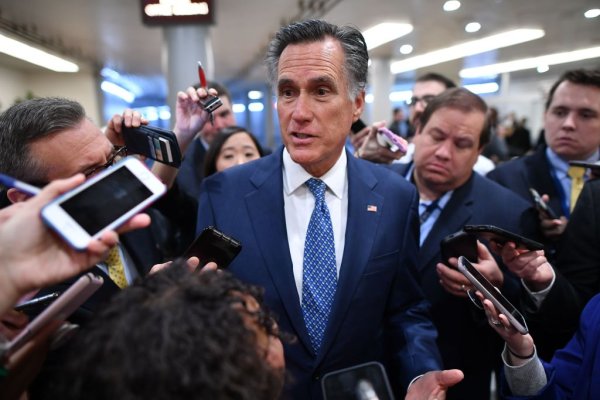 These Republican Senators May Decide Whether Trump's Impeachment Trial Includes New Witnesses
Next Up: Editor's Pick