The stakes just got higher for the Democratic lawmakers prosecuting the impeachment trial of President Donald Trump.

With fresh fractures emerging among Senate Republicans on whether new evidence should be allowed in the trial, the next two days of questions and answers will be a pivotal opportunity for House Democrats to persuade enough undecided Republicans to break with their party, which has insisted no new witnesses or documents be permitted.

In a closed-door meeting on Tuesday, Senate Majority Leader Mitch McConnell told Republicans that they currently did not have the necessary votes to block additional witnesses, according to one Congressional source, and laid out the case for why they should unify against it. In order for additional witnesses and documents to be considered, the Senate Democratic Caucus, assuming they stay united, needs at least four Republicans to vote with them.

Just a week ago, it didn’t look like Democrats were going to be able to scramble the votes to pull it off.

But the calculation changed after the New York Times reported on Sunday that Trump’s former National Security Adviser John Bolton is alleging in a draft of his upcoming book that the President admitted last summer he was withholding aid to Ukraine until the country’s President, Volodymyr Zelensky, publicly announced an investigation into a top political rival. Bolton has already said he would testify in the Senate if he is subpoenaed.

The revelations seemed to reinforce that more moderate Republican Senators who were already on the fence, like Maine Sen. Susan Collins and Utah Sen. Mitt Romney, could vote for his appearance. “The reports about John Bolton’s book strengthen the case for witnesses and have prompted a number of conversations among my colleagues,” Collins said in a statement Monday. Alaska Sen. Lisa Murkowski has also indicated she is open to hearing from Bolton, while Tennessee Sen. Lamar Alexander has repeatedly said he has not decided one way or the other.

The actual vote almost certainly will not take place until Friday, after Senators complete the allotted sixteen hours of submitting written questions to the managers and Trump’s defense team. (McConnell said Wednesday the period would be split over the course of two days).

A lot can happen in two days. McConnell is notorious for his ability to keep his conference in line and Republican sources cautioned that just because the votes are not there yet does not mean they won’t materialize by the end of the week.

Nevertheless, the state of play heightens the importance of the questioning period for the managers: It is, more or less, the last chance they have to make their case as they answer lawmakers’ questions.

Senate procedure dictates that Senators must submit their questions to the teams in writing to Chief Justice John Roberts, who will read them out loud to the chamber. (Democrats and Republicans will alternate their submissions.) There is, however, no official time limit imposed on either side in responding, according to a Senate leadership aide, and Senators, who are prohibited from speaking on the floor during the trial, must still remain silent during this phase. In theory, that means that House managers, if they so choose, can use their responses to any question as a platform to argue for more evidence.

Republican and Democratic Senators alike were mum on Tuesday on the questions they were preparing. “There’s been compelling arguments on both sides and there’s also things that basically are contradicting each other and we’d like to get clarification,” said Sen. Joe Manchin, a Democrat who has broken with his party on major votes in the past and has not yet said how he will vote on impeachment. “You’ll see when the questions come up.”

“My main question was related to, if the Bolton information were true, was it impeachable, and that was answered last night in my mind,” Indiana Sen. Mike Braun said Tuesday, referring to the arguments from Trump’s legal team that it was not.

Democratic Senators maintained that the managers should use their time remaining in front of the chamber to continue to push for witness testimony. Explaining why supplemental information is crucial during the Q&A period, said Pennsylvania Sen. Bob Casey, will be “critically important,” especially given that some Republicans are now wavering. “We don’t have all the facts,” said Hawaii Sen. Mazie Hirono. “We know there’s a lot more evidence out there.”

Even before McConnell’s acknowledgement to colleagues that he didn’t yet have the votes he needed, Democrats had been emphasizing that their response to the written questions would incorporate these points. “You can expect that we will focus like a laser on the importance of additional proof,” a senior democratic official working on impeachment told reporters on a conference call Tuesday.

They have just 16 hours left to do that. 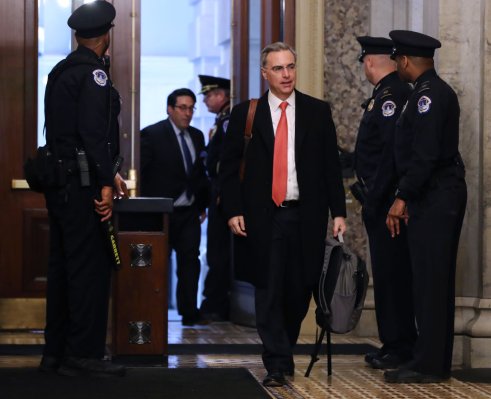